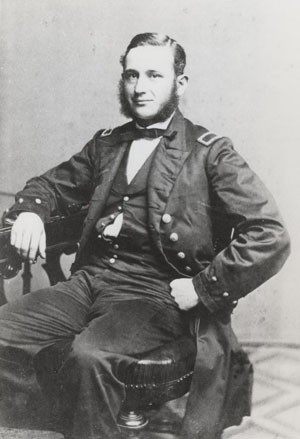 Appointed to the Naval School from New York, 20 September 1856. Midshipman, 1 January 1861, and attached to the frigates Constitution and Santee.

Commissioned a Lieutenant, 16 July 1862; Executive of the Chippewa , Pawnee and the monitor Montauk, South Atlantic Blockading Squadron, during the siege of Charleston from September 1862 to January 1865; wounded in the leg while attached to the Pawnee in the Stone River.

Executive of the Wachusett, Asiatic Squadron, September 1867 to August 1868. While on Asiatic Station, distinguished in defense of Americans against attacks of Chinese and capture of the famous rebel Hon.

Executive of the Richmond, European Squadron, December 1868 to November 1871.

Executive of the flag-ship Hartford, Asiatic Squadron, September 1872 to June 1873, when detached to command the Monocacy; detached from the latter vessel, 28 February.

1874-1876 on leave of absence from the Department in order to command one of the steamers of the Pacific Mail Steamship Company.

Commissioned a Commander, 18 December 1874; leave revoked, July 1876, and ordered to command the Adams; detached April 1877, and granted leave to command the Woodruff Scientific Expedition around the World.

Ordered to command the Tuscarora, December 1877, engaged in surveying the West Coast of Mexico and Central America; transferred from the Tuscarora to the Ranger, August 1880, and detached from the command of the later vessel in October 1883.

In command of the US Receiving Ship Independence at the Mare Island Navy Yard, May 1887 to May 1890. Commissioned as Captain 31 March 1889.

Commanding Atlanta December 1890 to December 1891; General Inspector of New York, December 1891, and when finished, was placed in command to August 1894.

Command of USS Texas, 18 October 1897. During the Spanish American War, in Battle of Santiago Bay and destruction of Admiral Cervera's fleet, July 3, 1898.