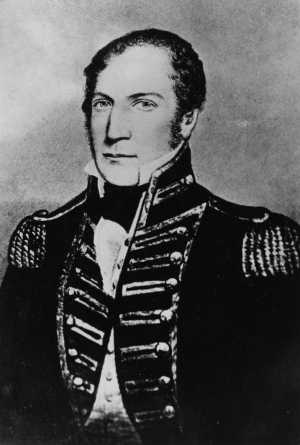 Born at Mt. Mellick, Queens County, Ireland, in 1773. Son of an officer in the British Army. Came to the United States with a younger brother in December 1790, and settled in Philadelphia, Pennsylvania. Entered the merchant marine.

His first naval service was as First Lieutenant of the USS Montezuma, Captain Alexander Murray, in Commodore Truxtun's squadron in the West Indies during the early part of the Naval War with France. On 20 October 1799 he was ordered to the command of the US Schooner Enterprise at Baltimore, Maryland, in which he rejoined Commodore Truxtun's squadron on the Guadaloupe Station in January 1800.

On 22 January 1800 he recaptured the schooner Victory with a valuable cargo from Norfolk bound to Antigua, which had been five days in the possession of the French, and on 24 January recaptured the brig Androscoggin of Topsham, six days in the possession of the French. He returned to the United States in February, but rejoined the squadron in March. On 17 June he captured the French privateer Cygne of 4 guns and 57 men after an engagement of 20 minutes. The Cygne had 5 killed and 14 wounded, the Enterprise 1 killed and 2 wounded. About the same time he captured the Privateer Citoyenne of 6 guns and 57 men, which surrendered only after a hard fight. On 4 July he captured the privateer Aigle of 10 guns and 78 men after a spirited engagement of 15 minutes, in which the privateer had 4 killed and 5 wounded. On 23 July he captured the privateer Flambeau of 12 guns and 90 men after an engagement of about three quarters of an hour, in which the Flambeau had 4 men killed and 20 wounded. This engagement was one of the hardest fought actions of the French War, and ended with the capture of a vessel of superior force, as the guns of the Flambeau, the same in number as those of the Enterprise, were said to be heavier, while the crew of the Enterprise numbered only 85.

While under Shaw's command the Enterprise took 3 other French armed vessels, besides making a number of recaptures. Among her prizes was a large, three-masted lugger of 12 guns, having as passengers several Army officers, including a General. At the time two American sailors were held as prisoners by the French and harshly treated on account of having killed two Frenchmen while recapturing their vessel, which later had the misfortune to be recaptured by the French. Attempts to release them by exchange had failed, and the French General and another officer were held in confinement as hostages, the General being finally allowed to go to Guadalupe on parole, where he succeeded in obtaining the release of the Americans.

In October 1800, Shaw's health broke down, and soon afterwards he was relieved of his command by Lieutenant Sterrett, and returned home in the USS Patapsco. His cruise in the Enterprise helped to make the little schooner one of the famous vessels of the Navy. After his arrival in Philadelphia he wrote, 12 December 1800, "I have in my last cruise taken thirteen sail of vessels, made 300 French prisoners, killed and wounded sixty-one men, taken forty-two pieces of artillery and 180 stand of musketry, which is already more than I could have contemplated.

He was retained in the Navy under the Peace Establishment Act of 3 March 1801, and on 4 May 1801 was ordered to the command of the USS George Washington, in which he carried tribute from the United States to Algiers, bringing back many Americans who had been taken prisoners by the Dey. On 9 July 1802 he was granted permission to make a European voyage. This permission was revoked on 21 August on account of the situation of affairs with the Barbary Powers, but was renewed on 31 August. On 30 December 1802 he was granted a furlough of 12 months to make an East India voyage.

On 25 September 1804 he was ordered to Baltimore to superintend the building of a brig and a gunboat there, and on 9 March 1805 was ordered to New York to take command of the USS John Adams, sailing on 14 May for the Mediterranean, where he joined the squadron of Commodore Rodgers, returning in November.

On 20 January 1806 he was ordered to the command of the vessels on the New Orleans Station, where he cooperated with the Army in foiling the conspiracy of Aaron Burr. He returned to Washington on the bomb ketch Vesuvius in July 1807.

On 1 March 1808 he was ordered to duty at Norfolk, Virginia, assuming command of the vessels on the station the next year. He remained on this duty until 7 July 1810, when he was again ordered to New Orleans as Commanding Officer, from which duty he was detached 18 October 1813, and ordered to report at Washington as soon as convenient. On 19 October 1814 he was ordered to the command of the USS United States at New London, Connecticut, and the naval forces there. In August 1815 he sailed from Boston in command of the United States to join the squadron of Commodore Bainbridge in the Mediterranean, assuming command when Bainbridge returned to the United States in October. He returned in the Constellation in December 1817, and in April 1818 assumed command of the Naval Station at Norfolk, in which position he remained until July 1819, when he was granted leave of absence on account of his health.

On 2 October 1819 he was ordered to the command of the USS Independence at Boston and Commander afloat on the Boston Station, which position he held until January 1822. He was again on duty at Boston during the latter part of 1822 and the early part of 1823. On 26 May 1823 he requested a change of duty to a warmer climate on account of his health. On 13 July 1823 he arrived in Philadelphia on a visit, and on 23 August was informed that he might have the command of the Charleston, South Carolina Naval Station if he desired it. He accepted the offer on 26 August, but died at Philadelphia of a fever on 17 September.

The first Shaw (DD-68) was laid down on 7 February 1916 by the Mare Island Navy Yard; launched on 9 December 1916; sponsored by Mrs. Virginia Kemper Lynch Millard; and commissioned on 9 April 1917, Lt. Comdr. Milton S. Davis in command.

The second Shaw (DD-373) was laid down on 1 October 1934 at the United States Navy Yard, Philadelphia, Pennsylvania; launched on 28 October 1935; sponsored by Miss. Dorthy L. Tinker; and commissioned on 18 September 1936, Lt. Comdr. E.A. Mitchell in command.