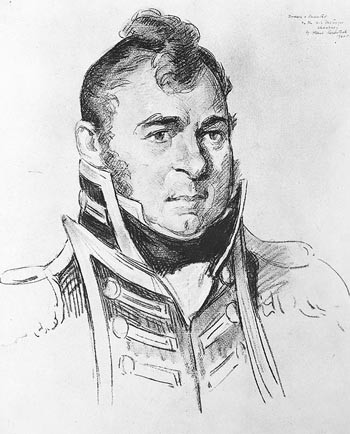 Isaac Chauncey was born 20 February 1772 in Black Rock, Fairfield County, Connecticut. A citizen of and appointed from the state of New York.

On 11 June 1799 Mr Chauncey was appointed a Lieutenant in the US Navy, to date from 17 September 1798, and ordered to the US Frigate President building at New York. This vessel was launched in April 1800 and Lieutenant Chauncey continued to serve on her until 1802. Late in 1800 the President, under command of Captain Thomas Truxtun, sailed for the Guadaloupe Station to participate in the Naval War with France, which was still in progress. She returned to Norfolk in February 1801, after an uneventful cruise in which she took no French prizes but made a few recaptures. She sailed from Hampton Roads 1 June 1801 for the Mediterranean under command of Captain James Barron, as flagship of a squadron commanded by Commodore Richard Dale. The squadron was sent out for the protection of American commerce in anticipation of trouble with the Barbary Powers. The President left the Mediterranean in March 1802 and arrived at Norfolk 14 April.

In September 1802, Lieutenant Chauncey was ordered to the US Frigate John Adams, which sailed on 19th September to reinforce the squadron under Commodore Morris operating against the Barbary pirates in the Mediterranean. Upon arrival on that station he was transferred to the USS Chesapeake as 1st lieutenant, subsequently to the USS New York. Lt. Chauncey returned to the United States late in 1803, but in March 1804 he was ordered to command the USS John Adams and prepare her for another cruise to the Mediterranean to carry provisions, stores and men out to the squadron. Lt. Chauncey was promoted to Master Commandant 18 May 1804. The John Adams sailed from Hampton Roads in June and arrived at Gibraltar 22 July. Since the vessel had sailed from Hampton Roads without her guns she was unable to participate in the fighting, but Commander Chauncey and his men volunteered their services on board the Constitution and took part in the attacks on Tripoli in August and September. Chauncey was highly commended by Commodore Edward Preble for his very able assistance on the quarter deck of the Constitution during the whole of the action. On 5 September the John Adams was ordered to deliver her stores at Malta and Syracuse and return to the United States. She left Gibraltar, with Commodore Preble on board, 8 January 1805 and arrived at New York on 25 February. Chauncey was detached from the vessel 16 April. He was included in the thanks of Congress to officers and men for their gallantry and good conduct displayed in the attacks on Tripoli.

From July 1805 to March 1806 Commander Chauncey was in command of the US Brig Hornet and cruised along the Atlantic coast in the squadron of Commodore Alexander Murray. He was promoted to Captain 24 April 1806. 13 March he was granted a furlough to make a merchant voyage, from which he returned in June 1807 and reported to the Department. On 13 July 1807 he was appointed Commandant of the New York Navy Yard, which position he held until September 1812 when he was appointed to command the naval forces on lake Ontario and Erie, with authority to purchase vessels, appoint officers, enlist seamen and buy naval stores. He arrived at Sackett's Harbor 6 October and established his headquarters at that place. Commodore Chauncey was especially distinguished for his service on the lakes during the War of 1812; he cooperated with the army in the capture of York (now Toronto) 24 April 1813 and Fort George 27 May 1813; and won an engagement with the British squadron under Commodore Yeo on 28 September 1813.

In May 1815 Commodore Chauncey was instructed to dispose of the fleet, naval stores, etc. at Sackett's Harbor and proceed to Portsmouth, New Hampshire and assume command of the USS Washington. He entered on board this vessel 25 August, but it was not until 15 April 1816 that the Washington was ready for sea. Late in 1816 Commodore Chauncey sailed for the Mediterranean and, together with General William Shaler, negotiated a treaty with Algiers. In 1818 he turned over the command of the Mediterranean Squadron to Commodore Charles Stewart and returned to the United States, arriving at New York in July.

During 1819-1820 Commodore Chauncey was the commanding naval officer on the New York Station. In November 1820 he was appointed a Commissioner of the Navy and served in this capacity for four years. On 29 December 1824 he again assumed command of the New York Navy Yard and Station and continued in that position until 1834 when the President again appointed him a commissioner of the Navy Board from the 5th of June 1833. Commodore Chauncey remained on this duty until his death, serving the last three years of his life as President of the Board. He died 27 January 1840 at Washington, DC and was buried in the Congressional Cemetery.

1) Autographed letter signed dated 9 February 1814, New York. To Commodore Bainbridge. Requesting assignment of an officer to Boston to recruit seamen for service on "the Lakes." War of 1812 content.

2) Four autographed letters signed. Three as Commander of the Navy Yard, New York 1826, 1827 and 1833). The fourth to Commodore Stewart at the Philadelphia Navy Yard dated 4 June 1839 regarding the Secretary of the Navy's direction to build a steamship.

3) Autographed document signed dated 5 May 1838, Navy Commissioner's Office. Outlines procedures for the requisition of rigging from the Rope Walk at the Charleston Navy Yard.