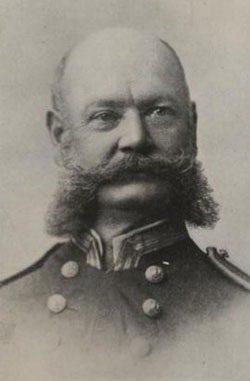 He served on the Brazil, South Atlantic, Pacific and North Atlantic stations and held important positions on shore during 1865-1897; reported for duty on the Asiatic station in April 1898 and served as Chief of Staff to Admiral Dewey at the Battle of Manila Bay 1 May 1898; the following day went ashore and demanded the surrender of the Cavite Arsenal; advanced seven numbers for evident and conspicuous conduct in battle during the war with Spain; later commanded the Olympia; member of the Lighthouse Board, 1900-1903; Commander in Chief of the South Atlantic Squadron, 1903; Chairman of the Lighthouse Board, 1905-1906.