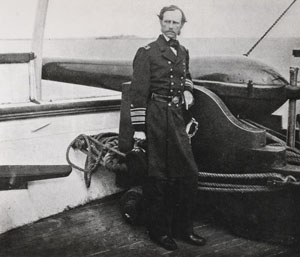 Rear Admiral John A. Dahlgren (1809-1870) was a naval ordnance innovator and commander of the South Atlantic Blockading Squadron during the Civil War.  Dahlgren became a midshipman in 1826.  Service on the U.S. Coast Survey (1834-37) distinguished his early career.  In 1847, Lieutenant Dahlgren was assigned to ordnance duty at the Washington Navy Yard.  Over the next fifteen years, he invented and developed bronze boat guns, heavy smoothbore shell guns, and rifled ordnance.  He also created the first sustained weapons R&D program and organization in U.S. naval history.  For these achievements, Dahlgren became known as the "father of American naval ordnance."  His heavy smoothbores, characterized by their unusual bottle shape, were derived from scientific research in ballistics and metallurgy, manufactured and tested under the most comprehensive program of quality control in the Navy to that time, and were the Navy's standard shipboard armament during the Civil War.  Promoted to commander in 1855, captain in 1862, and rear admiral in 1863, he became commandant of the Washington Navy Yard in 1861 and chief of the Bureau of Ordnance in 1862.

With help from his friend Abraham Lincoln, Dahlgren took command of the South Atlantic Blockading Squadron in July 1863, and for the next two years led naval forces besieging Charleston in the Union navy's most frustrating campaign.  Dahlgren cooperated magnificently with Army forces, but underhanded machinations by the ground force commander hindered the effort.  Dahlgren's courage remained beyond question during naval attacks on enemy fortifications, but he never figured out how to counter the enemy's underwater defenses. As a leader, he took good care of his enlisted men, but failed to inspire his officers.  After the war he commanded respectively the South Pacific Squadron, the Bureau of Ordnance, and the Washington Navy Yard.