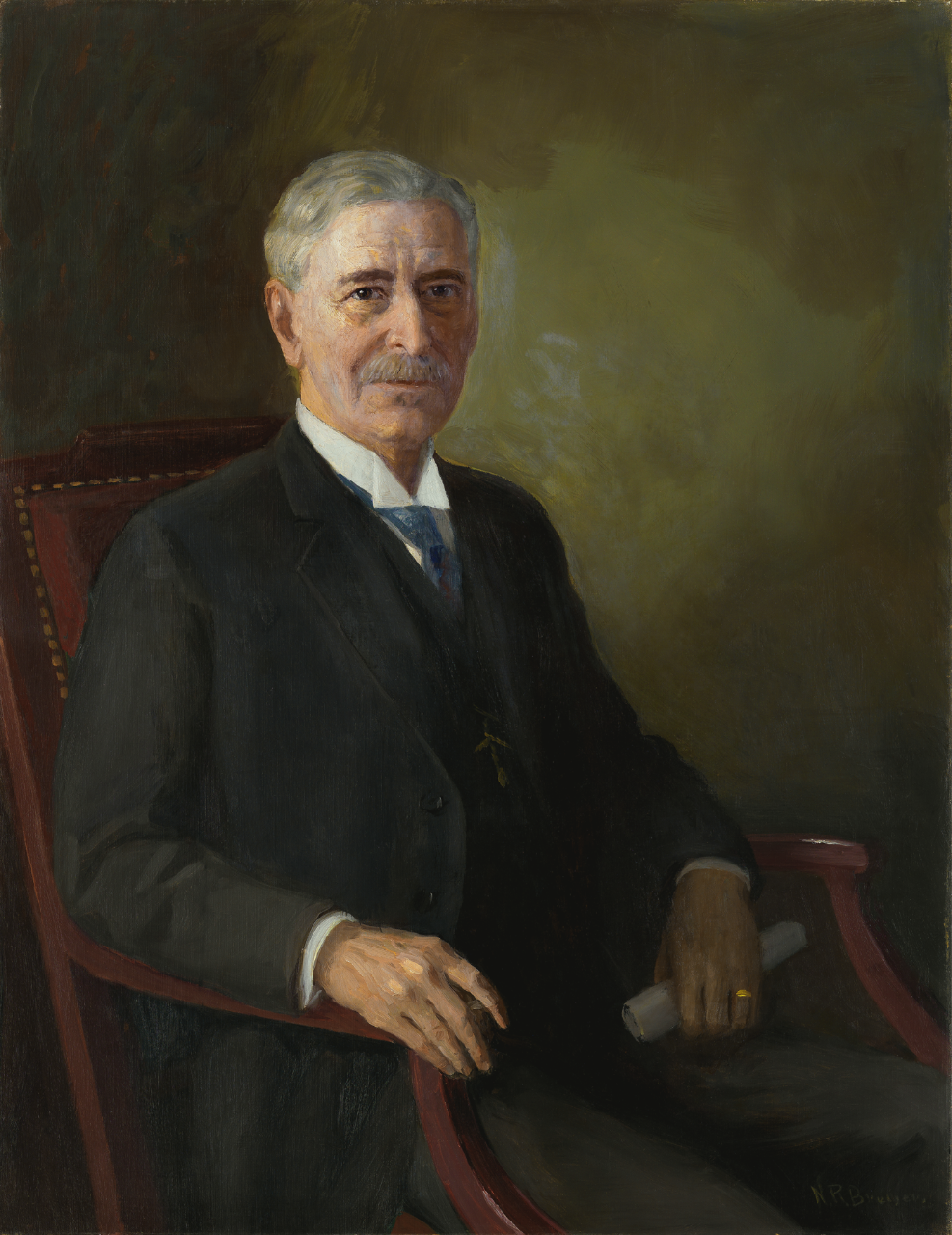 The Honorable Claude A. Swanson, Secretary of the Navy from March 4, 1933, to the date of his death, July 7, 1939, had been associated with the Navy since 1910, when he joined the Naval  Affairs Committee of the Senate. From that date he advocated a United States Navy second to none.

Born at Swansonville, Pittsylvania County, Virginia, on March 31 1862, he attended public schools until he was sixteen. After teaching in a public school for a year he enrolled at Virginia  Polytechnic Institute. Not able to continue his college course after one year, due to lack of funds, he accepted a position as a clerk in Danville, Virginia, where he remained until able  to matriculate two years later at Randolph Macon College, from which institution he was graduated with a Bachelor of Arts degree in 1885. He then studied law at the University of Virginia,  and was awarded the degree of Bachelor of Law in 1886.

From his law practice at Chatham, Virginia, he was nominated and elected to the Fifty-third Congress in 1893. Reelected, his career continued in Congress until his resignation, after election to the Governorship of Virginia in 1905. Inaugurated on February 1, 1906, he served as Governor until February 1, 1910. On August 1, 1910 he was appointed to fill the vacancy of John W. Daniel, Deceased, in the US Senate, which seat he held until his appointment as Secretary of the Navy, in the Cabinet of President Franklin D. Roosevelt, on March 4, 1933.

In 1918 he became Chairman of the Senate Naval Affairs Committee and as such helped to put through the great Naval building program during World War I. Although he was not a delegate to the London Naval Conference in 1930, he was chosen to present the treaty to the Senate, which he did in a 12,000-word address in advocacy of it. The Treaty was ratified. In 1932 he was  appointed delegate to the Disarmament Conference at Geneva, and was chosen American member of the Naval Commission of that Conference (February 2 to July 23, 1932).

Shortly after taking office as Secretary of the Navy on March 4, 1933, Mr.  Swanson said, "We want to construct up to the London Treaty. I think every effort should be made to keep the ratios of the London treaty. My opinion is that the Fleet should be built up as quickly as possible to the ratios prescribed in the Treaty. Whether we shall get the ratios by increases or decreases is a question for the State Department."

Secretary of the Navy Swanson was in his seventh year in that capacity in President Roosevelt's Cabinet when he died at Rapidan, Virginia, on July 7, 1939.

Interment was in Hollywood Cemetery Richmond, Virginia, on July 10, after services held in the United States Senate Chamber at the Capital,  Washington, DC.

Messages of condolence at the time of his death contained the following statements:

"His passing is a great loss to the armed forces of our Nation."

"Under his leadership, the sea defense of the nation has benefited by its greatest peacetime expansion and has made great progress toward reaching an adequate strength for the defense of this country. Throughout his long career in the public service, he has been a statesman of the highest character and attainments, of unquestioned integrity, and he has devoted himself  unremittingly and without reserve to the best interests of his country. We of the Navy feel deeply the passing of our distinguished and beloved Secretary."

"With the passing of Claude A. Swanson, a long and brilliant career of usefulness has come to an end. His loyalty to the people he served and his rugged honesty make him live on in our hearts as a friend and an example of a public servant of the highest possible type. He lived in truth the adage he was so fond of quoting “When in doubt do right."