Cameron McRae Winslow was born in Washington, DC, on 29 July 1854, son of Commander Francis Winslow, USN (1818-1862) and Mrs. Winslow. He was appointed Cadet Midshipman (at Large) by the President, and entered the US Naval Academy, Annapolis, Maryland, on 28 September 1870. Graduated in June 1874, he served the two years at sea then required by law, and was commissioned Ensign on 18 July 1876. He subsequently progressed in grade to Rear Admiral, to date from 14 September 1911, and served in the rank of Admiral, as Commander in Chief, Pacific Fleet, from 13 September 1915, until 29 July 1916, when he was transferred to the Retired List of the US Navy. He was recalled to active duty during the early World War I period, and remained in service from 18 September 1917, until 11 November 1919.

After graduation from the Naval Academy in 1874, he reported to the USS Tennessee, and later served in the USS Constitution, again in the Tennessee, the USS Despatch, USS Pensacola, USS Kearsarge and the USS Galena. Instruction at the Naval Torpedo Station and the Naval War College, Newport, Rhode Island, in 1887-1889, was followed by special duty in connection with Torpedo Boat N-1 from 23 December 1889 to 31 March 1890, then three years in command of the Torpedo Boat Cushing. On 29 March 1893, he joined the USS Alliance, and when detached in January 1895, reported for Equipment duty at the New York Navy Yard, Brooklyn, New York.

On 6 October 1896, he was detached from the New York Navy Yard with orders to the USS Terror, and in August 1897 was transferred to the USS Nashville. In the rank of Lieutenant, he commanded a boat expedition from the USS Nashville and USS Marblehead which was sent to cut the cables off Cienfuegos, Cuba, which connected Cuba with Europe. In spite of extremely heavy fire at point blank range from the enemy on shore, a length of nearly 200 feet was cut out of each of two cables, by use of hacksaws. Lieutenant Winslow was wounded in the hand by a bullet, but retained command of the expedition. His superior officer reported:

"The work performed by the people in the boats was both hazardous and difficult, and too much credit cannot be given to Lieutenant Winslow for his excellent judgment and consummate coolness, under most trying conditions of heavy sea and destructive fire of the enemy." He was advanced five numbers for extraordinary heroism during this operation.

On 10 October 1898, he reported to the USS Indiana, and nine months later was transferred to the USS New York. From 16 December 1899, until 8 February 1900, he was assigned to the New York Navy Yard, and for fourteen months thereafter was in charge of the Branch Hydrographic Office at New York. He next served as Flag Lieutenant on the Staff of Commander North Atlantic Station, attached to the USS Kearsarge, flagship, and on 1 March 1902, reported to the Navy Department, Washington, DC, for a tour of duty in the Bureau of Navigation. While there he had additional duty as Aide to the President of the United States and with the General Board.

He assisted in fitting out the USS Mayflower, and from her commissioning on 12 July 1905, until 19 December, that year, served on board. When detached he assumed command of the USS Charleston, and on 25 July 1907, returned to the Bureau of Navigation for duty as Assistant to the Chief of the Bureau. In March 1908 he was sent to New York in command of the USS New Hampshire, then continued in command until 8 November 1909, when he became Supervisor of the Harbor of New York. He remained there two years.

Brief duty at the Naval War College, Newport, Rhode Island, in November and December 1911, was followed by command (in the rank of Rear Admiral) of the Second Division, Atlantic Fleet, his flag in the USS Louisiana. He later commanded the Third Division, then the First Division (USS New Jersey and USS Florida respective flagships), and when detached from the later command on 1 January 1913, he returned to the Naval War College. There he remained until 23 April 1914, when he assumed command of Special Service Squadron, hoisting his flag in the USS New York. That squadron, under his command, participated in operations at Vera Cruz in the Mexican Campaign during the period 4 May to 17 September 1914.

On 21 August 1915, he was designated Commander in Chief, Pacific Fleet, and in the rank of Admiral hoisted his flag in the USS San Diego on 17 September 1915. He was so serving when relieved of all active duty and transferred to the Retired List of the US Navy, upon attaining the statutory retirement age on 29 July 1916. He was recalled to active duty during the early World War I period, and served from 18 September 1917, until 8 November 1919, as Inspector of Naval Districts on the Atlantic Coast, with the USS Aloha as Flagship. He returned home on 11 November 1919.

Miss Natalie E. Winslow sponsored the second vessel named USS Winslow in honor of her father's second cousin, Rear Admiral John Ancrum Winslow, USN, (DD-53) at the launching of that vessel on 11 February 1915. The first vessel of that name had been sponsored by Miss. E.H. Hazel, daughter of former Senator Hazel of Pennsylvania. A third vessel to bear the name USS Winslow (DD-359) honored both Rear Admirals John A. Winslow and Cameron McR. Winslow, USN (with consent of the President) and was sponsored by Miss Mary Blythe Winslow of Raleigh, Tennessee, great-granddaughter of Rear Admiral John A. Winslow. 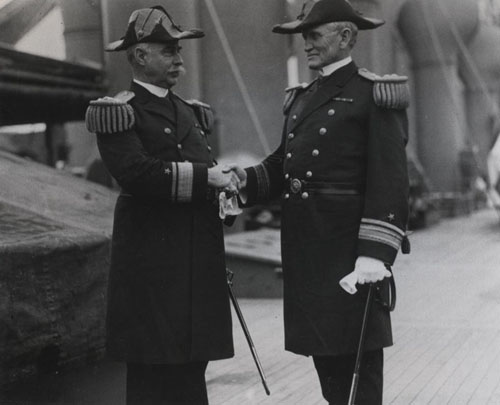