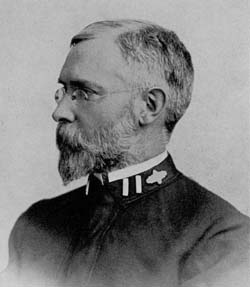 George Hammeken Kearny was born in Saugerties, New York, on 31 March 1848. He graduated as a civil engineer from Union College in 1866 and was appointed third assistant engineer in the United States Navy in October of that year. During the next two years he was a member of the first class (1868) of engineers at the United States Naval Academy. He was promoted to second assistant engineer in 1876 and chief engineer in 1893, commander in 1899 and captain in 1903.

Kearny joined Saranac on the Pacific station in 1868 and was attached to the Asiatic station from 1868-1871. He served on the Benicia from May to July 1871 while that ship participated in Rear Admiral John Rodgers's expedition to Korea. Assistant Engineer Kearny was on duty at the United States Naval Academy in 1872-1873 and went from there to Congress, spending three years on the European station. He was stationed at the New York Navy Yard in 1877 and in 1878 returned to the Naval Academy for three years. Kearny served on the Coast and Geodetic Survey steamer Blake between 1881-1885 and returned to New York for another tour of duty there between 1885 and 1887. From New York, he was posted to the South Atlantic station for three years serving on Lancaster and Tallapoosa.

Kearny returned to New York in 1890 for duty in connection with new cruisers on which he was engaged until 1893. He made important contributions to the development of steam engineering during this assignment and was the author of several articles on the motive power of the modern steel warship. During 1894-1897 he was attached to Marblehead and Minneapolis on the European station. In 1896 he was a member of the personnel board that combined the line and engineer corps. From 1897 to 1900 he was head of the Department of Steam Engineering at the United States Naval Academy, where he revised the course in engineering. In 1900 he became the head of the Department of Steam Engineering at the Boston Navy Yard and in 1905 was transferred the New York Navy Yard as head of its Department of Steam Engineering. He was serving in this capacity at the time of his death on 17 February 1907.