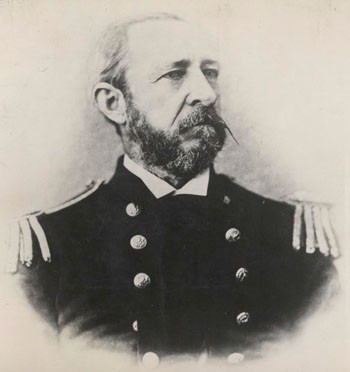 Daniel Ammen was born 15 May 1820 in Ohio; a citizen of and appointed from this state.

He was appointed a Midshipman in the US Navy 7 July 1836 and on 30 September was ordered to the Store Ship Relief attached to the South Seas Surveying and Exploring Expedition; 1 July 1837 transferred to the US Frigate Macedonian, preparing for service with the Exploring Expedition. From March 1838 to November 1839 Mr. Ammen cruised in the West Indies on USS Levant and Vandalia. In March 1840 he was ordered to the US Sloop of War Preble. After a cruise along the coast of Labrador, the Preble sailed for the Mediterranean 12 January 1841 to join the squadron of Commodore C. W. Morgan. In May Midshipman Ammen was transferred to the USS Ohio, in which he returned to Boston in July 1841.

After attending the Naval School at Philadelphia during the winter of 1841-42, Mr. Ammen was promoted to Passed Midshipman 1 July 1842. In the fall of 1842, he preformed survey duty in Delaware Bay, and in 1843 served on the Receiving Ship Experiment at Philadelphia and the USS Savannah preparing for sea at New York. Previous to the Savannah's sailing for the Pacific in October 1843, Mr. Ammen was transferred to the Store Ship Lexington, in which he made several trips to the Mediterranean to deliver supplies. From April 1845 to April 1847 he was attached to the USS Vincennes on a cruise in the East Indies; 1847-49, on coast survey duty.

Mr. Ammen was promoted to the rank of Master 10 May 1849 and to that of Lieutenant 4 November 1849. In October of that year he was granted three months' leave with permission to visit Europe and then join the Mediterranean Squadron. He was assigned to duty on board the USS St. Lawrence by Commodore Morgan in the Mediterranean, and returned to the United States in that vessel in November 1850.

Following another tour of coast survey duty Lt. Ammen was ordered to the Steamer Water Witch which sailed for South America 8 February 1853, under command of Lieutenant Thomas J. Page, on an expedition to explore the La Plata and Parama Rivers. In May 1854 he was detached from the Water Witch and assigned to duty on the USS Bainbridge in the Brazil Squadron. Upon the return of the Bainbridge to the United States in January 1855, Lt. Ammen was detached and granted three months'leave. In April he reported for duty at the Naval Observatory, Washington DC; detached in August 1857 and ordered to the US Steamer Saranac, which subsequently sailed for the Pacific. Lt. Ammen was transferred to the USS Merrimack, Flagship of the Pacific Squadron, in June 1858 and remained on that vessel until her return to the United States in February 1860. On 20 March he was ordered to the Naval Rendezvous at Baltimore, Maryland, where he was on duty at the outbreak of the Civil War.

In May 1861, Lt. Ammen was ordered to the USS Roanoke, on which he served in the North Atlantic Squadron until September when he was ordered to command the Gunboat Seneca, South Atlantic Blockading Squadron. While under command of Lt. Ammen Seneca took part in the battle of Port Royal 7 November, the expedition up Warsaw Sound 5 December, the attack on Port Royal Ferry 1-2 January 1862, the expedition up the Wilmington River 26-29 January, and shared in the capture of several Confederate vessels and the town of Fernandina, Florida.

Mr. Ammen was promoted to the grade of Commander 16 July 1862. In August he was transferred from the Seneca to the Gunboat Sebago, which he commanded only a short time then returned North, reporting his arrival at Washington, DC 4 October 1862. On 11 October he was ordered to command the ironclad steamer Patapsco building at Wilmington, Delaware. This vessel was placed in commission 2 January 1863 and on 2 February Commander Ammen reported with her at Beaufort, North Carolina, for duty with the South Atlantic Blockading Squadron. The Patapsco took part in the attack on Fort McAllister on 3 March and in the operations against the forts in Charleston Harbor 7 April. Commander Ammen was detached from the Patapsco because of ill health in June 1863 and ordered North. He remained on sick leave until September when he returned to duty in the South Atlantic Blockading Squadron as an aide on the staff of Rear Admiral John A. Dahlgren, US Steamer Philadelphia Flagship, and took part in the operations against Charleston, SC that fall. However, in January 1864 he was again found "unfit for service" by a medical survey and authorized to return North.

During March and April 1864 Commander Ammen served as temporary commander of the USS Shenandoah, North Atlantic Blockading Squadron. From October 1864 to 17 January 1865 he commanded the USS Mohican on blockade duty off Wilmington, North Carolina, participating in the attacks on Fort Fisher 24-25 December 1864 and 13-15 January 1865. From 17 January to 7 March 1865 he was attached to the South Atlantic Blockading Squadron, operating around Charleston, SC. Upon arrival of the Mohican at the Boston Navy Yard in April Commander Ammen was detached from command and the vessel placed out of commission.

In July and August 1865 Commander Ammen was employed in the recovery of naval machinery at Charlotte and other points in North Carolina. From September to March 1866 he was in command of the US Monitor Miantonomoh, North Atlantic Squadron. He was promoted to the grade of Captain 25 July 1866; on special duty at Hartfort Connecticut, from November 1866 to August 1867; commanding US Steamer Piscataqua from August 1867 to February 1869. The Piscataqua sailed for the Asiatic Station 16 December 1867, where she served as Flagship of Admiral S.C. Rowan. Captain Ammen was detached from this vessel in February 1869 and upon his return to the United States was appointed Chief of the Bureau of Yards and Docks. He served in this capacity from May 1869 to October 1871 and as Chief of the Bureau of Navigation from 1871 to 1878. He was commissioned a Commodore 1 April 1872, a Rear Admiral 11 December 1877, and placed on the Retired List 4 June 1878.