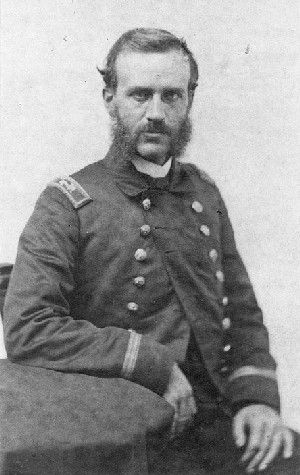 Caption: "Carte de Visite" photograph, probably taken circa 1861-1862. He was serving on USS San Jacinto during the November 1861 Trent incident. Breese held the rank of Lieutenant between 1855 and 1862.

Born in Philadelphia, 14 April 1831. Appointed Midshipman, 6 November 1846, from Rhode Island, and, on the 25th of November, passed the required mental and physical examination at Annapolis; March 1847, was ordered to USS Saratoga, Commander Farragut, and served on her on the Mexican coast during the war. In the spring of 1848, Saratoga, going out of commission, was ordered to St. Mary's, and, on her arrival at Rio de Janeiro, was detached and ordered to the frigate Brandywine; served on Brandywine until the expiration of her cruise, December 1850; February 1851, joined the frigate St. Lawrence, then loading at New York with articles for the World’s Fair at London, and made that cruise in her, returning in August 1851; from October 1851 to June 1852 at the Naval Academy studying for examination.

Warranted 8 June 1852, and ordered to Mississippi, flagship of Commodore M.C. Perry during his Expedition to Japan; temporarily attached to Macedonian, in search of coal on the north end of the island of Formosa, and in investigation of the captivity of Americans by the savages of that island; on return of Mississippi to the United States in April 1855, was detached and granted leave; in July was ordered on Coast Survey duty, and was engaged in that work until August 1858; was then ordered to Preble, Paraguay Expedition, serving in that expedition and afterward on the Mosquito coast off Greytown, South Africa until September 1859, when he was invalided home with Isthmus Fever; November 1859, was ordered to Portsmouth off the coast of Africa, and took passage in Mohican to join her; served on board Portsmouth until August 1860, when he joined San Jacinto; remained on San Jacinto until the expiration of her cruise in December 1861.

In December 1861, was ordered to the command of the Third Division of Porter’s Mortar Flotilla, and participated in the attack on New Orleans and Vicksburg in 1862; was recommended for promotion by Captain Porter for services at this time. Was appointed Lieutenant-Commander to date from 16 July 1862. His services throughout the Civil War were honorably mentioned by Porter in his “commendatory despatch” of 28 January 1865, and follows: “Lieutenant-Commander K.R. Breese, my Fleet-Captain, has been with me nearly all the time since the Rebellion broke out. In command of a division of the Mortar Flotilla, which opened the way to New Orleans, he made his first record there. In the Mississippi with me for two years, engaged in harassing and dangerous duties, he always acquitted himself to me satisfaction. In charge of the mortars at the siege of Vicksburg, he helped to hasten the surrender of that stronghold. At Fort Fisher he led the boarders in the assault, and, though we were not successful in getting into the fort in the face of equal numbers, yet that assault gained the day, as is generally admitted on every side. Our troops obtained a footing without much resistance, then nobly maintained what they had won. Lieutenant-Commander Breese did all he could to rally his men, and made two or three unsuccessful attempts to regain the parapet; but the marines having failed in their duty to support the gallant officers and sailors, who took the lead, he had to retire to a place of safety. He did not, however, lose the ground, but remained under the parapet in a rifle pit, using a musket until night favored his escape. He is a clever, gallant officer, and I strongly recommend his immediate promotion to a commander.” August 1865, was ordered to the Naval Academy and served there until September 1866 as assistant to the Superintendent, Admiral Porter; November 1866, was ordered as a member of a Board to examine volunteer officers for entry into the Navy; June 1867, to the Washington Navy Yard as Inspector of Ordnance; July 1869, was detached from the Navy Yard and ordered as a member of a permanent Ordnance Board, 1 December.

After duty with various Boards he was ordered 29 June 1870 to the command of USS Plymouth, European Squadron; detached from Plymouth in October 1872; December 1872, ordered to duty in the Bureau of Ordnance, Navy Department, and in June 1873 to the Naval Academy as Commandant of Midshipmen.

Commissioned as Captain, 9 August 1874, and in October was, at his own request, detached from the Naval Academy; Hydrographic Inspector, 1875, to command of Torpedo Station, 1875; detached from Torpedo Station, September 1878, and ordered to special ordnance duty. In command of USS Pensacola, Flagship of Pacific Station, January 1879 to June 1880. Died at Newport, Rhode Island, 13 September 1881.

3 December 1846 - Acting appointment as Midshipman, to rank from 6 November.

9 June 1852 - Detached from the Academy and to Mississippi.

13 September 1858 - Be ready for duty in Paraguay Expedition. 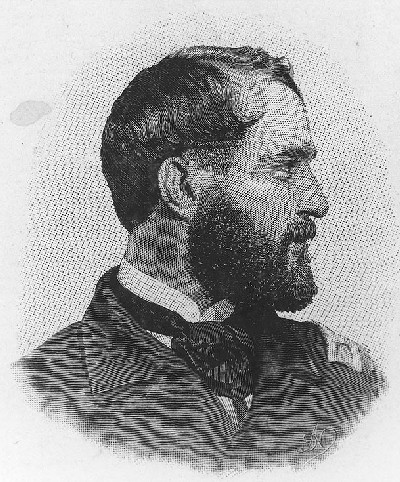 5 August 1862 - Promoted to a Lieutenant Commander.

4 October 1862 - Detached, return North and to the Mississippi Squadron.

16 December 1872 - To special duty as Inspector of Ordnance.

17 January 1879 - Detached and to command Pensacola per steamer, 30th instant.

23 July 1880 - Previous order modified and to be considered on sick leave from 10 June, for three months.

Callahan, Edward W. ed. List of Officers of the Navy of the United States and of the Marine Corps from 1775-1900, Comprising a Complete Register of All Present and Former Commissioned, Warranted, and Appointed Officers of the United States Navy, and of the Marine Corps, Regular and Volunteer. New York, L.R. Hamersly & Co., 1901. [See page 75 for a list of Breese’s dates of promotion and death.].