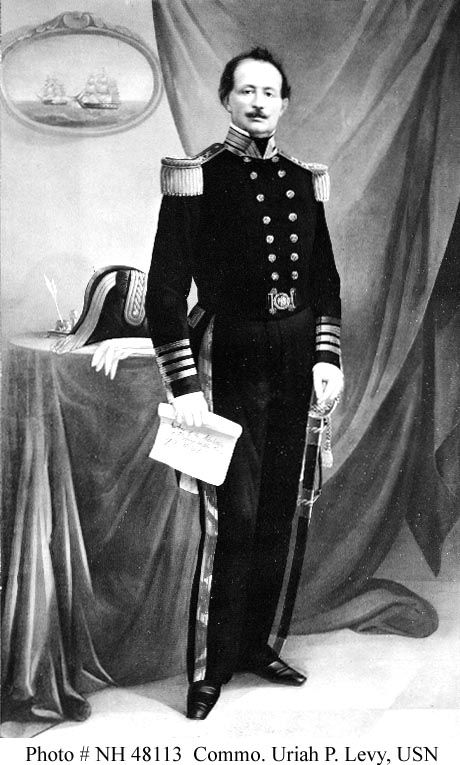 Uriah Phillips Levy was born in Philadelphia, Pennsylvania, on 22 April 1792. While best known as the US Navy’s first Jewish flag officer, he was also of Hispanic origin, being descended from Sephardic Jews who had left Spain to avoid the Inquisition. His maternal great-great-grandfather, Dr. Samuel Nunes Riberio, was one of the original settlers of Savannah, Georgia, in 1733. Levy entered the merchant service at ten years of age and after varied interesting and dangerous experiences, rose to the position of master and owner of vessels previous to his appointment to the Navy.

Levy was appointed and warranted a Sailing Master in the US Navy by President Madison on 21 October 1812, and ordered to New York, where he served for a short time on USS Alert in New York Harbor, later joining the USS Argus , Commander William H. Allen, which carried US Minister Crawford to France. The Argus arrived at L'Orient 12 June 1813, and then cruised off the British coast, making many captures, but was herself captured by the HBMS Pelican on 14 August 1813. Previous to this Levy had been appointed Acting Lieutenant and placed in charge of the Betty, a valuable prize of the Argus, in which he was captured on 12 August, while en route with her to France. He was taken to England, where he remained a prisoner for sixteen months. In December 1814, he was returned to the United States in a cartel, but owing to the long voyage did not reach Norfolk until after the treaty of peace was signed.

On 5 March 1817, Levy was commissioned Lieutenant. In 1817-1819 he cruised in the Mediterranean on board USS Franklin and United States. In 1822 he was attached to the Naval Station at Charleston, SC and for a brief period in 1822-1823 cruised in the West Indies in command of US Gunboat No. 158 for the suppression of the slave trade and punishment of piracy. In 1824-1825 he had another short term of service in the Mediterranean on the USS Cyane.

He was promoted to Master Commandant (Commander) 9 February 1837. In 1838-1839 he commanded the USS Vandalia in the West Indies. He was promoted to Captain 29 March 1844. From 1841 to 1855 Captain Levy was either on leave or waiting orders. On 13 September 1855, he was dropped from the Navy List under Act of February 1855 but was restored to active duty as Captain on 29 January 1858, his appointment as Captain dating from 22 March 1844. In April 1858, he was ordered to take command of USS Macedonian, fitting out for the Mediterranean and in October 1859 the command of the Mediterranean Squadron was turned over to him. This was his last active duty. He died at his residence, 107 St. Mark's Place, New York, 22 March 1862.

Captain or Commodore Levy, as he was called because of his command of a squadron, was a strong advocate for the suppression of corporal punishment in the Navy, and his untiring efforts toward this end had great influence in securing its abolition by Congress in 1850.

In 1834 Levy bought Monticello from a creditor of Thomas Jefferson, and he and his descendants held the property until 1923, with the exception of the years 1861-65, when it was sequestrated by the Confederate government.

The USS Levy (DE-162) was named for Commodore Uriah P. Levy and was launched on 28 March 1943, when a niece of the late officer was the ship's official sponsor. The vessel was placed in commission on 13 May 1943 at Brooklyn, NY and had active service in the Pacific Area during the latter period of World War II. She was placed in Reserve in the Sixth Naval District after the war. The Jewish Chapel at the United States Naval Station, Norfolk, Virginia, and the Commodore Uriah P. Levy Center and Jewish Chapel at the United States Naval Academy in Annapolis, Maryland, were also named in his honor.