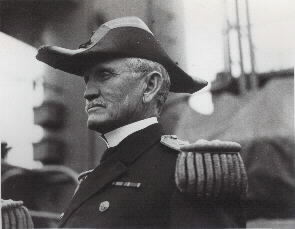 Caperton's account of the 1915 landings and occupation of Haiti

Admiral Capterton, born 30 June 1855 at Spring Hill, Maury County, Tennessee, attended Spring Hill Academy before entering the United States Naval Academy from the Sixth District of Tennessee upon appointment of the Honorable W.C. Whitthorne in 1871. He graduated from the Naval Academy in September 1875 and served the two years at sea, then required by law, before being commissioned Ensign on 3 August 1877. He subsequently progressed through the various grades to the rank of Rear Admiral on 13 February 1913. On 19 July 1916 he was designated Commander in Chief, Pacific Fleet with the rank of Admiral in the Navy from the date of assuming command, 28 July 1916. Transferred to the Retired List of the Navy on 30 June 1919 he continued on active duty until 12 November 1921. He was commissioned Admiral on the Retired List to rank from 21 June 1930 (Act of 21 June 1930) and died 21 December 1941.

Following graduation from the Naval Academy in September 1875, Admiral Caperton served at sea for five years, with duty aboard USS Powhatan, USS Constellation, and USS Tennessee. He had three years' service with the Coast and Geodetic Survey, after which he joined Ossipee for service on the Asiatic Station. In April 1887, he assumed duty as Inspector of Steel at Pittsburgh, Pennsylvania, and in November of the following year transferred to Washington, DC for duty as Secretary of the Steel Inspection Board. He next had brief duty in the summer of 1891 as Recorder of the Examining Board at Norfolk, Virginia.

Admiral Caperton had three years' consecutive sea duty aboard USS Miantonomoh, USS Vesuvius, and USS Essex. On 21 February 1895, he reported to the Office of Naval Intelligence, Navy Department, Washington, DC, and following three months' duty in that office, he had instruction at the Naval War College, Newport, RI, completing the course there on 15 October 1896. Next followed consecutive service aboard USS Brooklyn and during the Spanish-American war period aboard USS Marietta, with service as executive officer of that vessel after the peace protocol was signed on 12 August 1898, and until 16 October 1899.

Returning to the United States, Admiral Caperton reported for duty as Inspector of Ordinance at the Navy Yard, Washington, DC, to serve from December 1899 until July 1901, when he was ordered to duty in connection with the fitting out of USS Prairie. He served as her executive officer from her commissioning, 8 August 1901, until May 1904, when he was again ordered to the Naval War College, Newport, RI. Completing the course of instruction in October of that year, he became Inspector of the 15th Light House District at St. Louis, Missouri, and served in that capacity until 15 April 1907.

He assumed command of USS Denver on 20 April 1907 and transferred his command to USS Maine on 31 July 1908. Detached from that command when the Maine was decommissioned on 31 August 1909, he proceeded to Washington, DC. He thereafter became Secretary of the Light House Board, Department of Commerce and Labor, on 11 October 1909, and served in that assignment until 30 June 1910 when he was ordered to duty in attendance upon the summer conference of officers at the Naval War College, Newport, RI. Upon completion of the conference he returned to Washington, DC, where he was assigned duty as member of the Naval Examining and Naval Retiring Boards.

Following duty as Commandant of the Naval Station, Narragansett Bay, Rhode Island, from May 1912 until October 1913, during which period he was promoted to the rank of Rear Admiral, Admiral Caperton became Commander in Chief, Atlantic Reserve Fleet, USS Alabama, flagship, and after a year's service in that command, he assumed command in November 1914 of Cruiser Squadron, Atlantic Fleet, USS Washington, flagship. During the period of this assignment, and transferring his flag to Tennessee and later to Dolphin, he commanded the Naval Forces that intervened at Haiti in 1915-1916; was Commander Naval Forces, Vera Cruz, in 1915; and commanded Naval Forces intervening and suppressing the Santo Domingo Revolution in 1916. 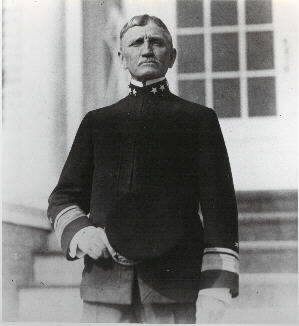 Relieved of command of Cruiser Force, Atlantic Fleet, he returned to the United States, reporting to Key West, Florida. Upon designation as Commander in Chief, Pacific Fleet, by the President of the United States on 22 July 1916, he proceeded to San Diego, California to assume his new duties in the rank of Admiral, and hoisted his flag in USS Pittsburgh. He was in charge of the patrol of the East Coast of South America which cleared southern waters of German raiders during World War I and he greatly aided in the development of good will between the US and her Allies. For his services as Commander in Chief of the Pacific Fleet during World War I, he was awarded the Distinguished Service Medal with citation as follows:

Distinguished Service Medal "For exceptionally meritorious service in a duty of great responsibility as Commander-in-Chief of the Pacific Fleet on the East Coast of South America in establishing friendly diplomatic relations with the countries of South America."

On November 1, 1918, ten days before the signing of the Armistice which officially closed hostilities between Germany and the United States, Admiral Caperton was designated by the President of the United States as Special Representative with the rank of Ambassador Extraordinary and Plenipotentiary to attend the ceremonies at Rio de Janeiro on 15 November 1918, incident to the inauguration of His Excellency, Dr. Francisco de Paulo Rodriquez Alves, as President of the Republic of Brazil. He was also Special Naval Delegate at the inauguration of Dr. Brun as President of Uruguay in 1919. Detached from command of the Pacific Fleet in April 1919, he reported for duty in the Office of Naval Operations, Navy Department, Washington, DC.

On 12 April 1919, President Franklin D. Roosevelt (then Acting SecNav [Secretary of the Navy] ) authorized the following:

"In view of the splendid work accomplished by Admiral Caperton, he will be released from present duty on April 30th, and, pending his retirement June 30th, he will be detailed to prepare a complete and detailed memorandum of his duty since being ordered to sea duty in 1915 with special reference to what he has been connected with since war was declared. This memorandum will be turned over to the historical section of the Navy. Admiral Caperton's duty since war was declared, above referred to, has been the commanding officer of the Pacific Fleet which, in conjunction with British and French fleets, cleared the Southern Atlantic of German raiders and patrolled the east coast of South America. On his flagship, USS Pittsburgh, Admiral Caperton made courtesy visits to South American republics during the war and since the Armistice was signed. His visits were of inestimable value, as they strengthened the bonds of friendship between South American republics and the United States and promoted solidarity of relations between these countries and the Allies. Admiral Caperton was put in command of the cruiser force of the Atlantic Fleet on November 21, 1914. He has been in command of the Pacific Fleet since May 22, 1917, on which date original orders of June 7th, 1916, were amended."

Admiral Caperton was transferred to the Retired List in the rank of Rear Admiral on 30 June 1919, but continued on active duty in connection with the official reception of the President Elect of Brazil, and as Naval Aide to Dr. Pessoa during his visit to the United States, and return. Upon completion of this temporary duty, he was ordered for further temporary duty in the Office of the Chief of Naval Operations, and later as witness before Senate Committee on Occupation and Administration of Territories of Haitian Republic by American Forces. Relieved of all active duty, he proceeded home in November 1921. He was commissioned Admiral on the Retired List of the Navy from 21 June 1930 (Act of June 21, 1930).

In addition to the Distinguished Service Medal, Admiral Caperton had the Spanish Campaign Medal (1898); the Cuba Pacification Medal; the Mexican Service Medal (USS Washington, 1915); the Dominican Campaign Medal (USS Dolphin, 1916); and the Victory Medal, Patrol Clasp, (USS Pittsburgh), for World War I Service. He also had the following foreign decorations: Order of the Bust of Bolivar, Third Class, by the Government of Venezuela; and the Grand Official da Ordem do Cruizeiro do Sul, by the Brazilian Government.