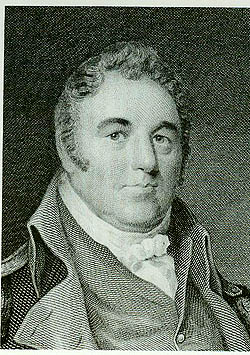 Richard Dale, naval officer, was born near Norfolk, Virginia, on 6 November 1756; died in Philadelphia, Pennsylvania, 26 February 1826. He entered the merchant service at the age of twelve, and at nineteen commanded a ship. In 1776 he became a lieutenant in the Virginia navy, and was soon afterward captured and confined in a [British] prison ship at Norfolk, where some royalist school-mates persuaded him to embark on an English [naval] cruiser against the vessels of his state. He was wounded in an engagement with an American flotilla, and while confined to his bed in Norfolk, resolved "never again to put himself in the way of the bullets of his own countrymen."

After the Declaration of Independence [4 July 1776] he became a midshipman [the most junior naval commissioned officer rank - literally an officer trainee] on the American brig Lexington, which was captured on the coast of France by the English cutter [HMS] Alert in 1777. Dale was thrown into Mill prison, at Plymouth, with the rest of the officers and crew of the Lexington, on a charge of high treason, but escaped, with many of his fellow prisoners, in February 1778, was recaptured, escaped again, disguised as a British naval officer, and reached France, where he joined John Paul Jones's squadron as master's mate. Jones soon made him the first lieutenant of the Bonhomme Richard, and in that capacity he fought with distinction in the famous battle with the [HMS] Serapis, on 23 September 1779, and received a severe splinter wound [caused by large flying splinters of wood blasted out of the hull by enemy cannon shot]. After the sinking of the Bonhomme Richard in that engagement [with John Paul Jones and his crew capturing the Serapis], Dale served with Jones in the Alliance, and afterwards in the Ariel.

He returned to Philadelphia on 28 February 1781, and was placed on the list of lieutenants in the [Continental] navy, and joined the Trumbull, which was captured in August of that year by the [HMS] Iris and the [HMS] Monk. Dale received his third wound in the engagement. Dale was exchanged in November, obtained a leave of abscence, and served on letters of marque [this was a private ship authorized by its government in a "letter of marque" to act as a privateer and attack and capture enemy ships - this was often done by a government to augment its navy] and in the merchant service until the end of the war.

He was appointed captain in 1794, but with the exception of a short cruise in the Ganges, during the troubles with France, was not in active service until 1801, when he was given command of a squadron and ordered to the Mediterranean during the hostilities with Tripoli [due to Tripolitan pirates capturing American ships, enslaving American seamen, and demanding tribute of the United States]. Although he was greatly hampered by his instructions, so that no serious enterprise could be attempted, he prevented the Tripolitans from making any captures [of American vessels] during his command.

He returned to the United States in April, 1802, and was again ordered to the Mediterranean, but, becoming dissatisfied, he resigned his commission on 17 December, and having gained a competency, spent the rest of his life in retirement.

Dale enjoyed the distinction of having been praised by [Admiral] Lord Nelson [British Royal Navy], who, after critically watching the seamanship of the commodore's squadron, said that there was in the handling of those trans-Atlantic ships a nucleus of trouble for the navy of Great Britain. The prediction was soon verified [in the War of 1812]. Two of Commodore Dale's soon held commissions in the [U.S.] Navy.

Sherburne, John Henry. Life and Character of the Chevalier John Paul Jones, a Captain in the Navy of the United States, During Their Revolutionary War. Washington and New York: Wilder & Campbell, 1825.

20 December 1801 - ALS to Honorable Robert Livingston, American Minister at Paris. Reports Dale has entered the inner port at Toulon where he intends to heave down ship.