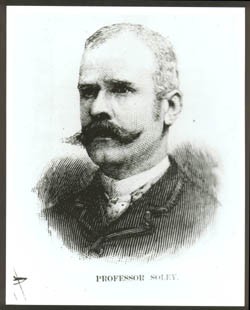 Related documents at the US Naval Academy

James Russell Soley, Assistant Secretary of the Navy from 1890 to 1893.

James Russell Soley, teacher, naval writer, and lawyer, was born at Roxbury, Massachusetts, on 1 October 1850, son of John James and Elvira Codman (Degan) Soley. He was a descendant of John Sole, an English settler at Charlestown, Massachusetts, in the seventeenth century, and (through both parents) of Judge James Russell of Charlestown. After preparation in the Roxbury Latin School, he entered Harvard College and graduated in 1870. A year's instructorship in St. Mark's School, Southborough, Massachusetts, was followed by his appointment 1 October 1871, as professor of ethics and English at the United States Naval Academy.

From 1873 to 1882 he was head of the Department of English Studies, History and Law at the Naval Academy, and from 1882 to 1890 he served as the librarian of the Navy Department in Washington. During the larger part of the latter period he was also Superintendent of the Naval War Records Office, which he organized. From 1886 to 1890 he was Professor in the Navy, Corps of Professors of Mathematics, rising to the relative rank of Commander. Soley wrote several books treating of naval history, and lectured on international law at the Naval War College, 1885-1889. He was Lowell Institute lecturer in 1885 on American naval history and in 1888 on European neutrality in the Civil War. He had studied law in Annapolis and continued this work at Columbia (later George Washington) University, receiving his law degree in 1890.

On 18 July 1890, he resigned his naval commission to become Assistant Secretary of the Navy, and occupied this position until March, 1893, with special administration of labor in naval shore establishments. Thereafter he practiced law in New York City with his former naval chief, Benjamin Franklin Tracy (Secretary of the Navy, 6 March 1889 to 6 March 1893); in the firm of Tracy, Boardman, and Platt (later Boardman, Platt and Soley). His special field was international law, and his most notable legal service was as counsel for Venezuela in the boundary dispute with Great Britain, arbitrated at Paris in 1899.

Until otherwise occupied after 1890, he was a prolific and able writer, chiefly on naval subjects.

He was married 1 December 1875, to Mary Woolsey Howland, daughter of the Reverend Robert Shaw Howland, of New York. They had a son who died in infancy and two daughters. His burial was in the Church of the Heavenly Rest, New York City, after his death 11 September 1911.

A destroyer, the USS Soley (DD-707), was named in his honor. His daughters Mrs. Howard C. Dickinson and Mrs. Charles Connfelt, christened the vessel when she was launched at the Federal Shipbuilding and Dry Dock Company, Kearney, New Jersey on 8 September 1944.

30 Sept 1871 - Appointment to US Naval Academy as Assistant Professor.

21 May 1873 - Appointment to Professor of Ethics and English Studies.

21 May 1873 - Soley's acknowledgement as Professor of Ethics and English Studies.

14 Dec 1886 - Notice of designation as Examiner on Naval Science and Affairs.

20 Sep 1871 - Letter recommending the appointment of Soley as Assist. Professor of Ethics and English Studies.

23 Sep 1871 - Letter from Acting Secretary of the Navy, James Alden, to Commodore John L. Worden agreeing to the recommendation.

23 Sep 1871 Letter from James Alden appointing Soley to the position.

20 May 1873 - Letter from Secretary of the Navy, George M. Robeson appointing Soley as Professor of Ethics and English Studies.