Bibliography of Writings of Commodore Knox

Dudley Wright Knox was born in Fort Walla Walla, Washington, on 21 Jun 1877, the son of Colonel Thomas Taylor Knox, USA, and Mrs. (Cornelia Manigault Grayson) Knox. After attending high school in Washington, DC, he entered the US Naval Academy on appointment from the Ninth District of Tennessee on 6 Sep 1892. He was graduated on 5 Jun 1896, and following the two years at sea then required before commissioning, he was commissioned Ensign on 6 May 1898. Subsequently, he attained the rank of Captain to date from 1 Feb 1918. He was transferred to the Retired List of the Navy in that rank on 24 Oct 1921, but continued on active duty until relieved on 26 Jun 1946. He was advanced to the rank of Commodore on the Retired List, to date from 2 Nov 1945.

Following graduation from the Naval Academy, he had duty as a Passed Midshipman on USS Massachusetts and upon outbreak of the Spanish-American War was commissioned as Ensign and transferred to USS Maple, serving in Cuban waters until the defeat of Spanish forces. He was then transferred to the receiving ship, Independence, at Mare Island, California, serving from 25 Aug to 1 Nov 1898, and then to USS Yorktown which proceeded to Manila and engaged in operations against the Philippine Insurrection. During this insurrection he later commanded USS Albay and USS Iris, which also participated in the Boxer Rebellion Campaign.

Relieved of command of Iris in June 1901, he reported for a tour of duty as an Inspector of Ordnance at Brooklyn, New York. Then followed four years in the First Torpedo Flotilla comprising the first destroyers of our Navy. In this he successively commanded Shubrick, Wilkes, Decatur and the Flotilla itself, which crossed the Atlantic and went to the Philippines and the coasts of China. Subsequently he was Ordnance Officer of USS Nebraska during the Atlantic Fleet’s cruise around the world, and then served as Aide to the Commandant of the Mare Island Navy Yard.

Thereafter he had duty as Fleet Ordnance Officer of the Atlantic, and later the Pacific Fleet; attended the Summer Conference of Officers and upon graduation remained for duty at the Naval War College in 1912-1913; and served as Aide on the staff of Commander, Atlantic Torpedo Flotilla, 1913-1914. On 25 Nov 1914 he reported for duty in the Office of Naval Intelligence, Navy Department, Washington, DC, where he served until 20 Apr 1916.

Assigned duty as Commandant, Naval Station, Guantanamo Bay, Cuba, he served in that capacity through the early period of World War I until August 1917 when he returned to the Navy Department for brief duty in the Office of the Chief of Naval Operations. He was detached on 22 Nov 1917 and proceeded to London, England, to join the staff of Commander, US Naval Forces Operating in European Waters. There he served first as Aide in the Planning Section, and later in the Historical Section, attached successively to Melville and Corsair.

He was awarded the Navy Cross for “distinguished service in the line of his profession while serving on the Staff of Commander, US Naval Forces Operating in European Waters.” Also, for meritorious service in that capacity he was awarded the Companion of the Order of St. Michael and St. George by the Government of Great Britain, and the Cross of St. Maurice and St. Lazarus by the Government of Italy. 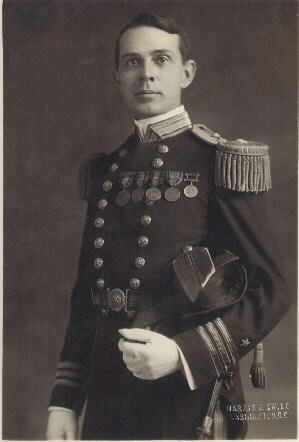 A 1934 photograph taken while Captain Knox served as officer in charge of the Office of Naval Records and of the Library of the Navy Department.

In March 1919 he returned to the United States, and from April of that year until March 1920, served as a member of the faculty of the Naval War College. During the next year he successively commanded USS Brooklyn and USS Charleston. Relieved of command of the latter vessel on 14 Jul 1921, he again returned to the Office of the Chief of Naval Operations, Navy Department.

Transferred to the Retired List of the Navy on 20 Oct 1921, he continued active duty as Officer in Charge, Office of Naval Records and Library, Navy Department, and also served as Curator for the Navy Department. During World War II he was assigned additional duty as Deputy Director of Naval History, and on 2 Nov 1945, he was advanced to the rank of Commodore, to continue while serving in that capacity. He was relieved of all active duty on 26 Jun 1946.

He was awarded the Legion of Merit for “exceptionally meritorious conduct…..as Officer-in-Charge of the Office of Naval Records and Library and as Deputy Director of Naval History from the beginning of the National Emergency on September 8, 1939, to the cessation of hostilities on September 2, 1945. Serving with distinction throughout this critical period, (he) carried out his important assignment with diligence and efficiency to insure that accurate records of the United States Navy’s participation in World War II were maintained for prosperity. Reviewing action reports, war diaries of ships and other historical data, he directed the correlation and preservation of this vital information and, in addition, was responsible for the servicing of numerous publications for accuracy of facts pertaining to Naval History….”

Commodore Knox died at the Naval Hospital, Bethesda, Maryland, on 11 Jun 1960, and was buried in Arlington National Cemetery, Arlington, Virginia. 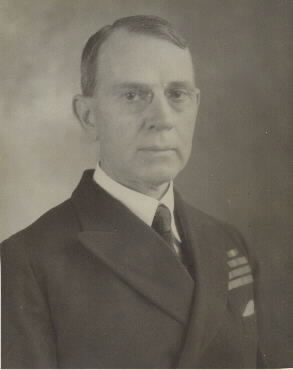 Commodore Knox was the guiding spirit in organizing the Naval Historical Foundation, and was its Secretary from 1926 to 1946. He was a Vice President and Chairman of the Executive Committee from 1946 to 1959, when he succeeded Fleet Admiral William D. Leahy as President. He was a member of the Advisory Council of Living Age, the American Neptune, the Americana Institute, the Massachusetts Historical Society, and the American Antiquarian Society, and had been Vice President of the Navy Mutual Aid Association.

He was a gold medal essayist, US Naval Institute, in 1914 and 1915; Naval editor of the Army and Navy Journal in 1920-23; was Naval correspondent for the Baltimore Sun in 1924-1929 and for the New York Tribune in 1929; and had contributed articles on naval subjects to various other publications. He was the author of The Eclipse of American Sea Power, published in 1922; The Naval Genius of George Washington, published in 1932; and Naval Sketches of the War in California, published in 1939.

He was survived by his wife, the former Lily Hazard McCalla of Santa Barbara, California.

Certificate of identification with photograph and finger print, dated 30 November 1907.

Printed invitation from the Duke of Connaught, dated 23 July 1918.