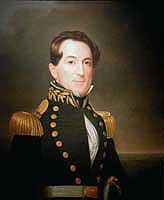 David Glasgow Farragut was born at Campbell's Station, near Knoxville, Tennessee, on 5 July 1801, and died at Portsmouth, New Hampshire, on 14 August 1870, after fifty-nine years of Naval Service.

Appointed midshipman on 17 December 1810, he saw his first sea service off the coast of the United States in the frigate Essex in 1811, and the next year was made the prize master of the Alexander Barclay, one of the prizes taken by the Essex. Farragut, then twelve, took her safely to Valparaíso. He took part in the battle between the Essex and the British ships Phoebe and Cherub off Valparaiso, Chile, in 1814. In March of the next year, he was ordered to Independence , to cruise in the Mediterranean, and remained with the Mediterranean Squadron until 1820, after which he served with the "Mosquito Fleet" in the West Indies until 1823.

Failing a preliminary examination for a lieutenancy in 1821, he tried again and passed, receiving the rank of lieutenant in August 1825. He attained the rank of commander on 7 September 1841; captain in 1855; and was commissioned rear admiral on 16 July 1862. The rank of vice admiral was created for him by President Abraham Lincoln on 31 December 1864, and on 25 July 1866, by Congressional Act, he was commissioned admiral, the first officer of the U.S. Navy to hold that rank.

Admiral Farragut's first command was the schooner Ferret in 1823-24, at the age of 22. In 1825 he was attached to Brandywine, assigned the duty of convoying the Marquis de Lafayette home to France after his visit to the United States. He served on the Brazil Station until late 1837, first as executive officer of Delaware, and later in command of Boxer and Decatur. While in command of the sloop Erie at Vera Cruz he witnessed the bombardment, by French Naval forces, of the castle of San Juan de Uloa in 1838. At that time he called special attention to the importance of horizontal shell fire.

Variously employed on ordnance, court-martial and Navy Yard duties at home from 1848 until 1854, during which period he worked for eighteen months on a book of Ordnance Regulations, he was sent to the Pacific Coast to establish the navy yard at Mare Island, California. He served as its Commandant from 1854 to 1859, and the next year commanded Brooklyn in the Gulf of Mexico. At the outbreak of the Civil War, he was called upon to choose between his native state and the federal government, and upon declaring his allegiance to the Union was given command of the Western Gulf Blockading Squadron in January 1862.

Ordered to "proceed up the Mississippi River and reduce the defenses which guard the approaches to New Orleans.... and take possession of it under the guns of (his) squadron," his passage of Forts Jackson and St. Philip, the defenses of New Orleans, in his fleet of wooden ships on 24 April 1862, was a grand achievement in naval warfare at the time when superiority of forts over ships was asserted everywhere. His most brilliant victory was the Battle of Mobile Bay, 5 August 1864, when he forced the passage of Forts Morgan and Gaines at the entrance to Mobile Bay and captured the Confederate ram Tennessee and the gunboat Selma.

He was thanked by Congress for his great victories and the rank of vice admiral was created for him by President Lincoln.

In 1867, in command of the European Squadron, he made an extended good will tour in his flagship Franklin, and after his return to New York the next year his health failed. He performed his last official service, that of taking charge of the naval ceremonies in Honor of Mr. George Peabody, whose body had been brought to the United States on the British ship Monarch. Farragut died the next year while on a visit to Portsmouth, New Hampshire.

It has been said of his naval career: "The history of Farragut's life is of importance less as a study of naval tactics, strategy and history than a study of the character of one whom many believe to have been the ideal of what a naval commander should be. He proved that kindliness, honor, love of friends and family, and a tolerant disposition are not incompatible with inflexibility in discipline and greatness as a warrior. But the secret of this success in war was in straight thinking and determined action..... in his famous words 'Damn the torpedoes; go ahead - full speed,' he was expressing no mere bragadoccio, but the guiding rule of his whole life: "First be sure you are right; then go ahead."

On board Hartford, Farragut entered Mobile Bay, Alabama, 5 August 1864, in two columns, with monitors leading and a fleet of wooden ships following. When the lead monitor Tecumseh was demolished by a mine, the wooden ship Brooklyn stopped, and the line drifted in confusion toward Fort Morgan. As disaster seemed imminent, Farragut gave the orders embodied by these famous words. He swung his own ship clear and headed across the mines, which failed to explode. The fleet followed and anchored above the forts, which, now isolated, surrendered one by one. The torpedoes to which Farragut and his contemporaries referred would today be described as moored mines. [Hearn, Chester G. Admiral David Glasgow Farragut: The Civil War Years. (Annapolis, MD: Naval Institute Press, 1988): 263-265. According to the book by Admiral Farragut's son, The Life of David Glasgow Farragut, First Admiral of the United States Navy, (New York: D. Appleton and Company, 1879), pages 416-417, Admiral Farragut said "Damn the torpedoes! Four bells! Captain Drayton, go ahead! Jouett, full speed!"]

Admiral Farragut was married in 1823 to Miss Susan C. Merchant of Norfolk, Virginia, who died on 27 December 1840. His second wife was the former Miss Virginia Loyall, also of Norfolk, to whom he was married on 26 December 1843. Their son, Loyall Farragut, was graduated from the US Military Academy, West Point, New York, and resigned in 1869.