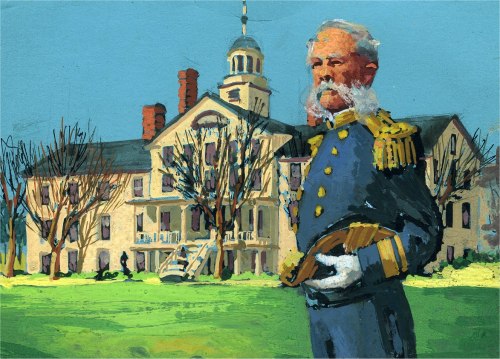 Stephen Bleecker Luce was born in Albany, New York, 25 March 1827. He was appointed Midshipman from New York 19 October 1841, and ordered to the North Carolina, 74 guns, New York. From April 1842 to March 1845 he was attached to frigate Congress, Captain P. F. Voorhees on the Mediterranean and Brazil Stations. May 1845 to March 1848 Luce was attached to the Columbus, another 74 gun ship, Commodore James Biddle, circumnavigating the globe, visiting Japan and serving on the coast of California during the Mexican War.

He was promoted to Master 14 September 1855 and then commissioned as a Lieutenant 15 September 1855. From 16 November 1857 to 11 February 1860 he was attached to sloop-of-war Jamestown, Captain C. H. A. H. Kennedy, during her cruise in the West Indies and on the Spanish Main. On 2 March 1860, he was assigned to the Naval Academy as Assistant Instructor. 2 May 1861 he was ordered to frigate Wabash, Captain Samuel Mercer, attached to the Blockading Squadron off the coast of South Carolina and participated in the battles of Hatteras Inlet and Port Royal where he commanded a howitzer launch of the Wabash during a reconnaissance in force and engagement with rebels at Port Royal Ferry, South Carolina, by combined military and naval forces. On 10 January 1862, Luce was ordered to the Naval Academy, Newport, Rhode Island.

On 5 January 1865 he reported to General W. T. Sherman at Savannah, Georgia for duty in connection with the army. With much difficulty he got the Pontiac up the Savannah River to Sister's Ferry, about forty miles above the city and guarded the pontoon bridge from molestation by the rebels while General Slocum's wing crossed into South Carolina.

On 26 September 1865 to Naval Academy in Annapolis, Maryland. He relieved Commander Fairfax as Commandant of Midshipmen (Naval Academy) on 6 October 1865. On 8 June 1866 he was ordered to command the Practice Squadron consisting of Macedonian and Savannah , Winnipec a double-ender; Saco and Marblehead steam third-rates; and yacht America (cruising on the coast).

Commissioned as Captain 28 December 1872, he was ordered on 12 December 1873 to command the frigate Minnesota during the Virginius excitement and then detached on the 22nd and resumed duties at Boston. On 15 October 1875, he was detached from Boston Navy Yard (as Captain of the Yard) and on 1 November 1875 was ordered to command the Hartford at New York, relieving the Worcester as flagship of the North Atlantic Squadron. On 21 August 1877 he was detached from the Hartford and 25 August 1877 ordered as Inspector of Training-ships. From 1 January 1878 to 1 February 1881 Luce was in command of the US training ship Minnesota cruising on the coast and from 25 April 1881 to 30 June 1884, was in command of US Naval Training Squadron cruising.

He was promoted to Commodore 25 November 1881 and on 9 October 1882 ordered as President of Commission on the Sale of Navy Yards. On 26 July 1884 was ordered to command the North Atlantic Squadron as Acting Rear-Admiral and 20 September 1884 ordered as President of the US Naval War College, Coaster's Harbor Island, Rhode Island. Promoted to Rear-Admiral 5 October 1885. From 18 June 1868 to 13 February 1889 in command of naval forces, North Atlantic Station. On 25 March 1889 he was transferred to the retired list.

Luce's total sea service was thirty-three years; his other duty twelve years three months and unemployed one year eleven months. On 23 May 1892 he was commissioned by President Harrison as Commissioner-General to represent the United States of America at the Columbian Historical Exposition, held in Madrid in 1892 in commemoration of the Four Hundredth Anniversary of the Discovery of America. On 1 March 1893 the Queen Regent of Spain conferred upon Rear-Admiral Luce the "Grand Cross of Naval Merit" with the "White Distinctive Mark" for his services as delegate of his Government to the Columbian Exposition. Then on 1 February 1901, he was ordered a member of the Board of Awards. By 1 June 1901 he was President of Board of Visitors to the Naval Academy and 5 August ordered to duty in connection with the Naval War College.

Rear-Admiral Luce was the first president (6 October 1884 - 22 June 1886) and driving force behind the Naval War College, he defined it as the highest level of professional naval education and "a place of original research on all questions relating to war and to statesmanship connected with war, or the prevention of war." After retirement, he returned as a member of the College's faculty from 1900 to 1910.