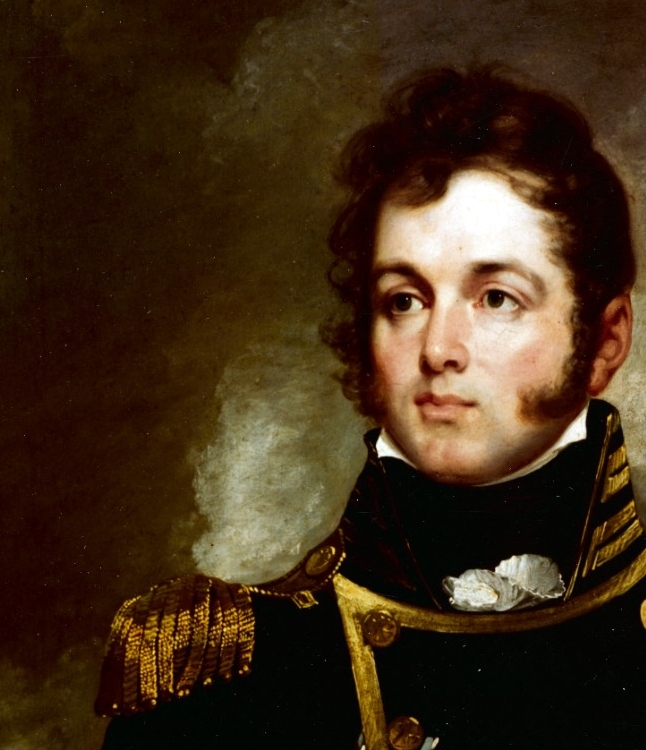 The man who was to lead the Lake Erie fleet to victory during the War of 1812 was born on August 23, 1785 at South Kingstown, near the village of Wakefield, Rhode Island. The eldest of five sons and three daughters born to Christopher Raymond and Sarah Alexander Perry, the first son was named after his paternal grandmother's father, Oliver Hazard, and also for his uncle, Oliver Hazard Perry, who had recently been lost at sea.

At age 13 the strong-willed and quick-tempered youth decided on a naval career. In the days before the naval academy a young officer aspirant was required to obtain a midshipman's warrant from the Secretary of the Navy, and such an appointment was rendered much easier if the candidate possessed influence. During the early months of 1799 the U.S. Frigate General Greene was in the process of fitting out for service against France following the "X,Y,Z affair," and her captain, Christopher Perry, recommended his son for one of the coveted midshipman appointments.

Oliver Hazard Perry was warranted a midshipman in the U.S. Navy on April 7, 1799. Over the next six years he participated in the Quasi-War with France and the Tripolitan War against the Barbary pirates. During that period Perry served on such famous ships as the Adams, Constellation, Nautilus, Essex, and Constitution, but he was not involved in any of the memorable engagements of those little known wars. After an extended leave in 1806-07, Perry superintended construction of a flotilla of small gunboats in Rhode Island and Connecticut, a duty he considered tedious, until in April, 1809 he received his first seagoing command, the 14-gun schooner Revenge.

Perry's vaunted good luck deserted him when he assumed command of the Revenge. Initially everything progressed well. During the summer and winter of 1809 the Revenge patrolled northern waters as part of a squadron under Commodore John Rodgers. Then in the spring of 1810 Perry's ship was ordered to the Washington Navy Yard for repairs preparatory to an assignment in southern waters. But in June, 1810, while enroute to Charleston, South Carolina, the Revenge lost several spars and suffered considerable damage after battling a severe storm. To make matters worse, Perry was plagued by illness. His fragile constitution was unable to tolerate the extreme heat and humidity of a southern summer, forcing him to request a transfer on July 21, 1810. Perry's unhappy tenure on the Revenge abruptly ended on January 8, 1811. In the process of conducting a survey of several harbors along the southern New England coast, the Revenge was sailing through the western reaches of Block Island Sound in heavy fog when the unlucky schooner struck a reef near Watch Hill Point and went down. The obligatory court-martial exonerated Perry, blaming the vessel's loss on the hapless pilot, who had assured Perry he would have no trouble navigating the sound.

After the court-martial Perry enjoyed an extended leave of absence. On May 5, 1811 he married twenty year old Elizabeth Champlin Mason at Newport, Rhode Island. The dashing young naval officer first encountered his future bride at a dance four years earlier. The newlyweds enjoyed an extended honeymoon, leisurely touring the New England states. Eventually the union, always described as a happy one, would produce five children, one of whom died in infancy.

Perry remained an unemployed officer until May of 1812 when the threat of war spurred the eager lieutenant to seek employment. When war with Great Britain was declared on June 18, 1812, Perry was assigned to command a squadron on tiny gunboats at Newport. Dissatisfied with what he considered an insignificant appointment, Perry petitioned the Navy Department for a posting at sea. Over the next few months, while his friends gained glory on sleek vessels like the Constitution, United States, and Hornet, Perry felt that he was unfairly being left to rot in a backwater of the war, even though he received a promotion to master commandant on October 6, 1812. Several unsuccessful pleas to the naval hierarchy finally prompted the disheartened Perry to initiate last resort measures to gain an important command. Not particularly desirous of serving on the Great Lakes, much preferring a sloop-of-war on the high seas, Perry nevertheless petitioned his old friend Isaac Chauncey, who then commanded naval operations on the lakes. Perry's timing was fortuitous since Chauncey was much in need of an experienced officer for the flotilla then under construction on Lake Erie.

On February 8, 1813 Perry received Navy Department orders to report to Isaac Chauncey on the lakes. His subsequent success, both with constructing the fleet and winning the battle, have immortalized Oliver Hazard Perry in American naval history as the hero of Lake Erie. Shortly after the battle and the subsequent victory of William Henry Harrison's army at the Thames River, where Perry served as a volunteer aid to Harrison, the commodore requested a transfer back to Rhode Island. In November, 1813 Perry resumed duties with the gunboat flotilla at Newport; however, his promotion to captain, dated September 10, 1813, and his elevated status with the Navy Department and the country, assured that it would be a temporary assignment. In July, 1814 Perry was offered a posting commensurate with his new rank, command of the Java, a new 44-gun frigate under construction in Baltimore. While engaged in fitting out the Java, Perry participated in the defense of both Washington and Baltimore during the late summer British invasion of the Chesapeake Bay region. Ironically these land engagements would be Perry's swan song, peace was declared before the new captain could get his ship to sea.

For Perry the post war years were marred by controversy. The Java cruised to the Mediterranean in 1815 to help quell continuing problems with the Barbary pirates. While anchored in Naples, an unseemly incident induced Perry to slap the Java's Marine officer, John Heath. Perry and Heath were both court-martialed and found guilty, but they received only mild reprimands. After the Java returned to home waters matters were further complicated when Heath challenged Perry to a duel. The duel was fought on October 19, 1817 on the same field where Aaron Burr killed Alexander Hamilton. The Marine fired first from four paces and missed; honor was satisfied when Perry refused to pull the trigger.

It was during this same period that Perry found himself entangled once again with his old nemesis from Lake Erie - Jesse Duncan Elliott. Perry's return from the Mediterranean prompted an exchange of acrimonious letters, after which Elliott challenged Perry to a duel. Perry declined, honor notwithstanding, and instead he decided to once and for all lay this repugnant business to rest by filing formal court-martial charges against Elliott. Specifications filed by Perry against Elliott included, "Conduct unbecoming an officer," "manifesting disregard for the honor of the American flag," and failure to "do his utmost to take or destroy the vessel of the enemy which it was his duty to encounter.

The Secretary of the Navy was dismayed by Perry's charges. Both officers had well-placed connections, and the secretary was all too aware of the scandal that would ensue, not to mention the divisiveness in the officer ranks engendered by a lengthy, sordid court-martial. Rather than make a decision the secretary abdicated responsibility and passed on the charges and relevant material directly to President James Monroe. Monroe, desiring to defuse the quarrel and unwilling to expose the Navy or the country to what he envisioned would be a deleterious encounter for all concerned, opted to suppress the whole matter. Thus ended the final opportunity to unearth the circumstances surrounding the Perry-Elliott controversy.

To placate and distract his impetuous young hero, Monroe selected Perry to preside over an important diplomatic mission to South America. Perry sailed on board the U.S. Frigate John Adams in June, 1819, arriving off the mouth of the Orinoco River on July 15. From there he transferred his flag to USS Nonsuch. The Nonsuch would carry Perry up the Orinoco to Angostura, the capital of Venezuela, where yellow fever was said to be a problem.

The Nonsuch arrived at Angostura on July 27. Perry maintained quarters ashore during the next two-and-a-half weeks, and while the commodore managed to maintain his own health, twenty Nonsuch crewmen attracted yellow fever, five of whom died. With his mission success-fully completed Perry rejoined Nonsuch, confident that he had escaped the fever and anxious for a quick passage back to the fresh breezes at Port of Spain, Trinidad. On the evening of Sunday, August 15 the schooner catted its anchor and rapidly floated downstream on the Orinoco's current. However, Perry was not to escape. Two days later he woke abruptly at 4:00 a.m. with chills and a fever. Always susceptible to illness, Perry's condition rapidly deteriorated. The crew of Nonsuch frantically pushed themselves and their vessel in an effort to reach Port of Spain, but their efforts fell short by only a few miles. At 3:00 p.m. on Monday, August 23, 1819 - on his 34th birthday - Oliver Hazard Perry died from yellow fever.