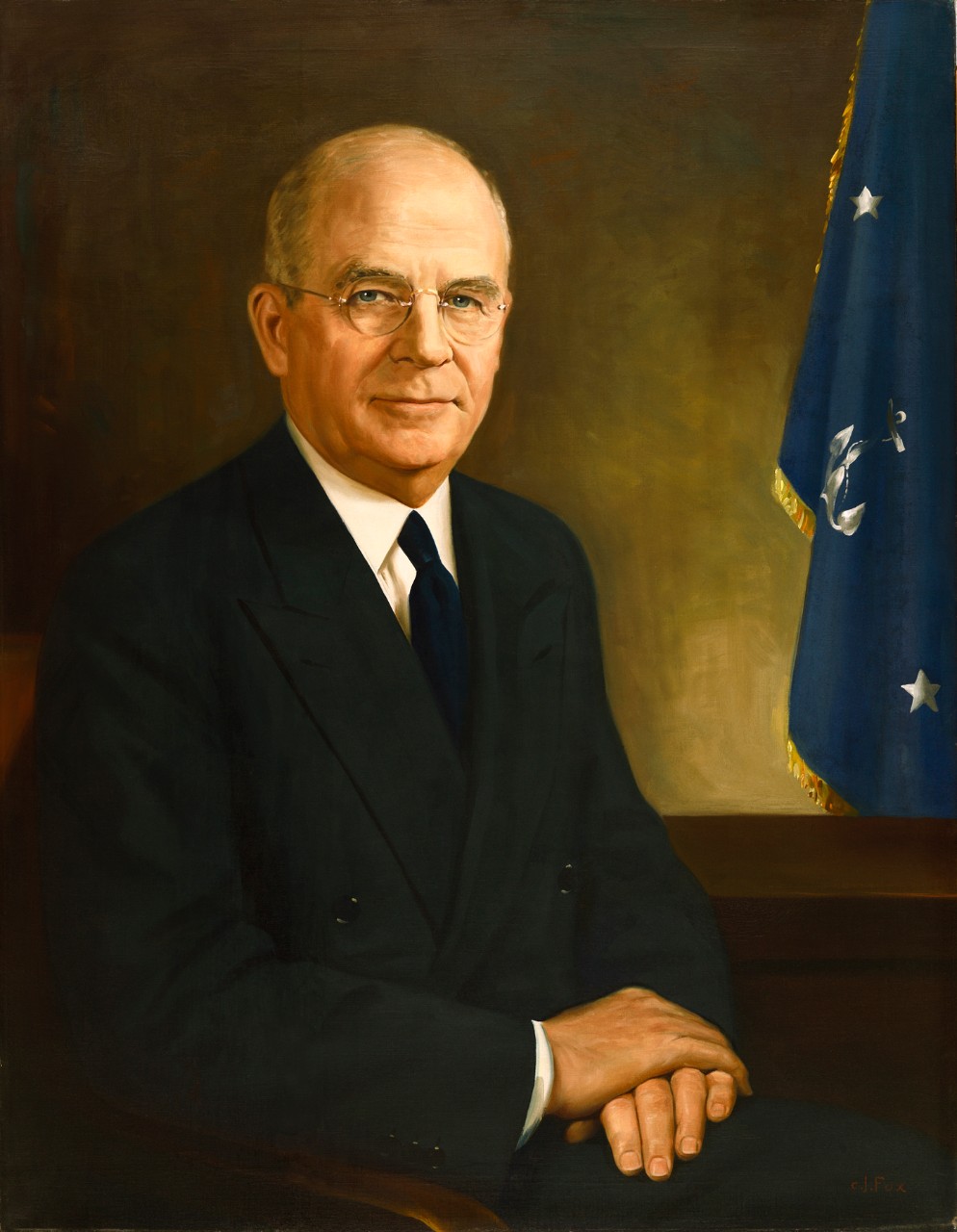 Francis Patrick Matthews of Omaha, Nebraska, became Secretary of the Navy on May 25, 1949, following unanimous confirmation by the United States Senate of his appointment by President Truman.

Mr. Matthews brought to the Navy Department a background of many years of activity in law and banking, in welfare work and in such civic projects as the Chairmanship of the United States Chamber of Commerce's Committee on Socialism and Communism and as a member of President Truman's Committee on Civil Rights.

Mr. Matthews is the first Nebraskan to serve as Secretary of the Navy. Although he is not a veteran, he was very active during World War II in welfare work for the United States Armed Forces and subsequently in relief work for the peoples of the liberated areas of Europe. He was one of the founders of the USO.

Mr. Matthews was born at Albion, Nebraska, March 15, 1887, the son of Patrick Henry Matthews and Mary Ann (Sullivan) Matthews. He lived for a short time at Okalona, Mississippi, and later at Spalding, Nebraska, where he helped his widowed mother support the family of seven children. After he was graduated from Albion High School, the family moved to Omaha, where he worked his way through Creighton University by doing odd jobs and tutoring in Latin and Greek. He received his Bachelor of Arts Degree from Creighton in 1910, his Master of Arts Degree from the same university in 1911 and his Bachelor of Laws Degree in 1913. He was admitted to the Nebraska Bar in 1913.

He received honorary degrees of Doctor of Laws from Marquette University, Milwaukee, Wisconsin, in 1940 and from John Marshall College, Jersey City, New Jersey, in 1943, and from Villanova College, Philadelphia and Loyola University, Chicago, in 1950.

From 1933 until his appointment as Secretary of the Navy he served as Counsel for the Reconstruction Finance Corporation of Nebraska and Wyoming. He is President of the First Federal Savings and Loan Association of Omaha; Director, Pre8ident and General Counsel of Radio Station WOW, Omaha; Director and Memb0r of the Executive Committee, Northwestern Bell Telephone Company; and a member of the law firm of Matthews, Kelley, Matthews and Delehant, in which his son Francis P. Matthews, Jr., is associated.

He visited England, Ireland and Scotland, 1943, and various countries in Europe and Middle East, 1944, in connection with welfare services for US Armed Forces and relief for people in liberated areas. He is a member of the Irish-American Historical Society of New York and the Nebraska State Historical Society.