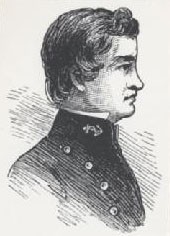 Philip Spencer, son of Secretary of War John C. Spencer, was appointed an Acting Midshipman in the US Navy on 20 November 1841. On 29 November, he was ordered to duty on board the Receiving Ship North Carolina at New York, where he remained until 5 February 1842, when ordered to proceed to Boston and report for duty on board the USS John Adams. He was attached to that vessel in the Brazil Squadron until June 1842 when he returned home in the USS Potomac, arriving at Boston on 31 July.

On 13 August 1842, Midshipman Spencer was ordered to the US Brig Somers at New York. The Somers, Commander Alexander Slidell MacKenzie commanding, sailed for the coast of Africa about 12 September, cruised briefly along that coast, and on 11 November sailed for the United States, by way of St. Thomas.

On the night of 25 November 1842, at sea, Purser's Steward James W. Wales of the Somers was contacted by Midshipman Spencer, after being sworn to secrecy, was informed that Spencer was conspiring with some twenty members of the crew to seize the vessel, murder her officers and engage in piracy - Spencer going into considerable detail concerning the plan. Wales made an attempt to notify Commander MacKenzie that night but was so closely watched by the conspirators that he was unable to do so. The next morning he succeeded in conveying word of the plot to the Commander through Purser Heiskell and Lieutenant Gansevoort.

Midshipman Spencer's general reputation was not particularly good and he was known to have been extremely familiar with the crew, and to have done a number of things harmful to the discipline of the ship. On the night of 26 November he was arrested and placed in irons, although he denied any knowledge of a plot to take the vessel. Search of his cabin revealed a paper written partially in Greek characters, which, when translated by another officer, appeared to be the plans of the mutiny giving names of the crew and their probable temper as regards the mutiny and the station to be assumed by various ones.

On 27 November, the falling of the maintopmast of the ship and its accompanying rigging, believed to have been caused by some of the suspected members of the crew with the intention of creating confusion favorable to an outbreak, resulted in no action. During the day suspicious gatherings of the crew were noted and that evening it was believed expedient for the safety of the ship to arrest Boatswain Samuel Cromwell and seaman Elisha Small and place them in irons.

During the following days the crew committed several minor offenses which were punished and exhibited a growing sullenness and tendency to disobey orders. Other arrests were made on 30th November.

On 30 November, Commander MacKenzie requested his officers to give him their opinion as to the line of conduct necessary for the safe continuance of the voyage. The whole day was spent by the officers in consultation and in questioning the crew and on 1 December they gave their answer as follows:

"In answer to your letter requiring our counsel as to the best course to be pursued with regard to the prisoners Spencer, Cromwell, and Small, we have the honor to state, that the evidence which has come to our knowledge after the most careful, deliberate and dispassionate consideration which the exigency would allow, is of such a nature as to call for the most decided action. We are convinced that in the existing state of things it will be impossible to carry the prisoners to the United States. We think the safety, our lives and honor to the flag entrusted to our charge, requires that the prisoners be put to death, as the course best calculated to make a salutary impression upon the rest of the crew. In this decision we trust we have been guided by our duty to God, to our Country, and to the Service."

This opinion concurred with Commander MacKenzie's, and it was determined to put the three conspirators - Spencer, Cromwell, and Small - to death, it being thought possible to confine the other prisoners safely, if the ringleaders were removed.

When Spencer was advised of his fate he made no confession, but his remarks that he "deserved to die," "that he had attempted the same thing on board the John Adams and Potomac, but unsuccessfully" etc., seemed to indicate guilt.

The three men were hanged on 1 December 1842, and their bodies buried at sea after funeral services had been held. The Somers arrived at St. Thomas on 5 December and proceeded from there to New York.

On 28 December 1842, a Naval Court of Inquiry was convened on board the USS North Carolina at the New York Navy Yard, to inquire into the intended mutiny on board the Brig Somers. The Court gave as its opinion that a mutiny had been organized on board the vessel involving the three men, Spencer, Cromwell, and Small; that there was grave danger of their being rescued by the crew after their arrest; and that the safety of the vessel demanded the immediate execution of the prisoners; that the conduct of Commander MacKenzie and his officers had been prudent, calm, and firm, and that they had honorably performed their duty to their service and country.

On 1 February 1843, a Naval General Court Martial was convened on board the USS North Carolina for the trial of Commander MacKenzie on charges of (1) murder on board a US vessel at sea, (2) oppression, (3) illegal punishment, (4) conduct unbecoming an officer, and (5) cruelty and oppression. The trial lasted from 1 February to 1 April, the charges against Commander MacKenzie were found "not proven" and he was acquitted.

Case of the Somer's Mutiny: Defence of Alexander Slidell MacKenzie, Commander of the U.S. Brig Somers... [1843]