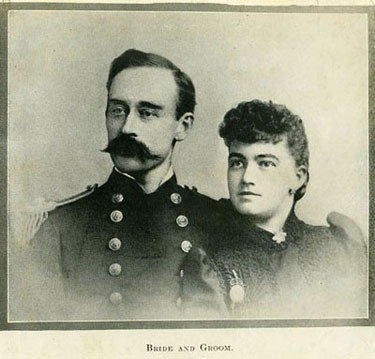 Robert Edwin Peary was born in Cresson, Pennsylvania, on 6 May 1856, son of Charles N. and Mary P. Peary. Three years later his father died, and his mother took him to Portland, Maine, where he spent his boyhood. He was graduated from Bowdoin College in 1877 with the degree of Civil Engineer, standing second highest in his class. The next few years he was employed as a draftsman in the Coast and Geodetic Survey offices in Washington, DC, and he enetered the Naval service as a Civil Engineer, USN, with rank of Lieutenant, on 26 October 1881. He was promoted to Lieutenant Commander on 5 January 1901 and to Commander 6 April 1902.

His first notable Naval Assignment consisted, oddly enough, of tropical duty. He later returned to the tropics when he led a party which surveyed a route for the proposed Nicaraguan Canal. It was not until after this that he became interested in the far north, and in April 1886 he was granted six months' leave of absence to lead an expedition to Greenland, where he recorded important ethnological and meteorological observations.

During the next twenty-three years he led various expeditions into the north. On some of these journeys he was accompanied by his wife, formerly Josephine Diebietsch, whom he married in 1888, and their children.The first attempt to reach the North Pole was carried out over a period of four years, from 1898 to 1902, when a point 343 miles from the pole was reached. Four years later, in 1906, he steamed northward in the Roosevelt, a sturdy ship built to his own design, which crushed its way to the shores of the Polar Sea, from which he marched to a point only 174 miles from the pole.

His third polar attempt, and his eighth and last expedition into the north (sponsored by the Peary Arctic Club, and later investigated and approved by the National Geographic Society), was crowned with success on 6 April 1909. Exactly 23 years from the day Peary left the Navy Department for his first exploration journey, he rerached the north geographical pole of the earth, not in the supposed Polar Continent, but a point in the ice-covered Arctic Sea. This was the expedition that achieved what no previous human had ever accomplished.

On that historic date, Peary wrote this note, which was placed in a small glass bottle and dropped into a crevice in the ice: 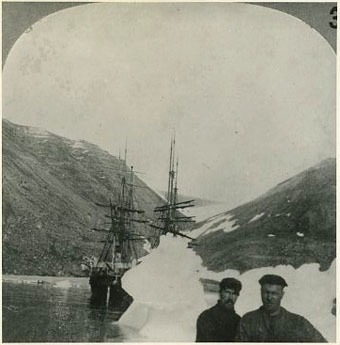 During his Naval career, between expeditions to the tropics and to the Polar regions, he performed various assignments in the Civil Engineer Corps. He attained the rank of Captain on 20 October 1910, and by a special action of Congress dated 3 March 1911, he was placed on the Retired List of the Navy as a Rear Admiral, effective 6 April 1909, the date he discovered the North Pole. He died at Washington, DC, on 20 February 1920, and is tombed in Arlington National Cemetery.

Admiral Peary's career remains for all time a noble example of courage, integrity, and adherence to ideals. He exemplified throughout an inflexible determination to attain a certain objective, and his warm-hearted consideration of welfare of his fellows endeared him as a big brother to members of his party. When in 1891, on the second expedition to the north, he suffered an accident which resulted in both bones of his leg being broken, the party urged him to return to the United States for the winter and resume his expedition the following year, but he insisted on being landed at McCormick, as originally planned, stating that the money of his friends had been invested in the project and he must make good to them. When he reached the Pole on 6 April 1909, he fulfilled the parting words of President Roosevelt at Oyster Bay prior to this last trip, 'Peary, I believe in you and if it is possible for men to get there, I know you'll do it.'

Admiral Peary's daughter, Marie Ahnighito Peary Stafford of Brunswick, Maine, and his son, Robert E. Peary, Jr., have shared their father's fascination for the North Pole. Mrs. Stafford, who was born only 13 degrees from the North Pole, had made four trips to the Arctic regions before she was 10. In 1932 she headed the Memorial Expedition to Greenland. Her brother, a civilian engineer, has worked on construction projects in the far north.

The Peary flag, a faded and stained United States flag, which hangs in Explorers Hall of the National Geographic Society Headquarters in Washington, was presented by Mrs. Stafford in 1955. Stitched by her mother in 1898, it had been carried as a talisman by Peary who had left snippets of it to mark his explorations in the Arctic. Several fragments have been recovered and restitched into the flag. 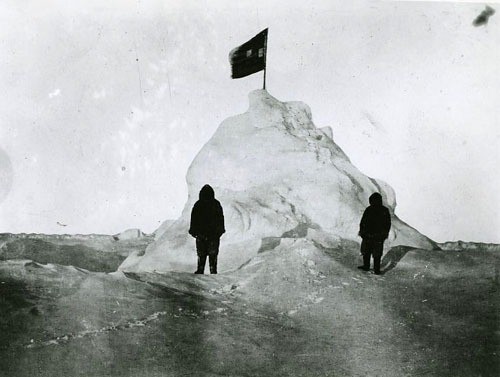