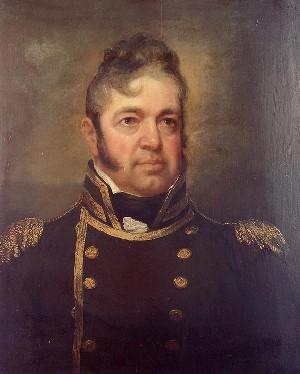 At the age of 15 he entered the merchant service where he made an unusual and distinguished record.

Upon his appointment as lieutenant in the Navy he was ordered to command the schooner or galley Retaliation, cruising in the West Indies. November 1798 - after a brave resistance, she was captured by the French frigates Volontier and Insurgente and carried into Guadeloupe. While here Bainbridge secured the release of a number of American prisoners and the Retaliation was restored to him by order of the Governor, that he might take them to the United States. Upon his return he was given command of Norfolk and during the years 1799-1800 made a number of captures of French privateers. May 1800 - he was ordered to the frigate George Washington to carry “tribute” from the United States to the Dey of Algiers. He was employed by the Dey of Algiers to carry his ambassador and gifts to the Sultan of Turkey and was instrumental in securing an order from the Sultan to the Dey obliging him to release 400 prisoners.

He returned to the United States and on 2 May 1801 was ordered to Essex, one of the vessels of the squadron of Commodore Richard Dale fitted out to cruise against the Barbary Powers.

March 1803 he was superintending the building of vessels for the US Navy at Philadelphia and Baltimore.

21 May 1803 ordered to command the Philadelphia, 44-gun frigate, of Commodore Edward Preble’s Squadron, to cruise against Tripolitan cruisers in the Mediterranean. 13 July 1803 ordered by the Department to sail in advance of the squadron. 26 August 1803 off Cape de Gatt, captured the Moorish ship Meshboha and recaptured from the Moors the American brig Cecelia.

31 October 1803 while in chase of a Tripolitan cruiser, the Philadelphia struck on a rock in the harbor of Tripoli, struck fast in the sands, was surrounded by Tripolitan gunboats and captured. Captain Bainbridge, his officers and men were taken on shore and imprisoned in the castle overlooking the harbor for 19 months. Upon the establishment of a treaty of peace with Tripoli, 3 June 1805, Captain Bainbridge returned to the United States in the frigate President. He was granted furlough during the years 1806-1807 and made a voyage in a merchant vessel. 1809-1810 again on duty in the Navy commanding the President. 1810-1811 on furlough and made voyages in merchant vessels to India and Russia, where hearing rumors of trouble with England he gave up his ship and returned home.

28 July 1812 he was ordered to command the Constitution and sailed on a cruise 28 October 1812. 9 November 1812 captured the brig South Carolina. 29 Dec 1812 after an engagement of 1 hour and 45 minutes captured the British frigate, Java, of 49 guns and 400 men. During this fight Bainbridge was twice wounded. 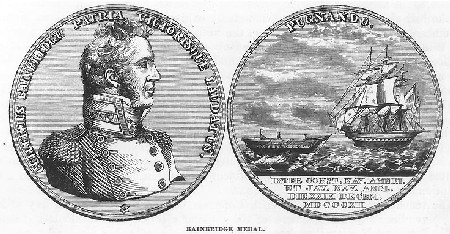 Caption: Engraving of the medal authorized by the United States Congress in honor of Captain Bainbridge's 29 December 1812 victory in the battle between USS Constitution and HMS Java.

His next duty was in command of the Navy Yard, Charlestown, Massachusetts. July-December 1815 commanded the Independence, Mediterranean Squadron. 1816-1819 on shore duty at various stations. 1819-1821 commanding the Columbus, flagship Mediterranean Squadron. 1821-1823 commanding first the Philadelphia, then the Boston Stations. December 24, 1824 - June 1827 Naval Commissioner. 1829-1831 commanding Philadelphia Station. He was again in command of the Charlestown Navy Yard until 19 November 1832, when he was granted leave. His health failed and his death occurred at Philadelphia in 1833. He was buried in the churchyard of Christ Church that city. 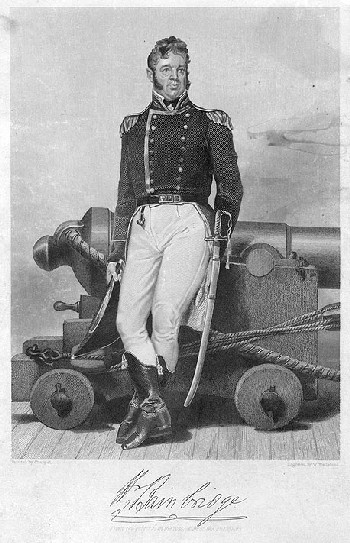 Record of the service of Captain William Bainbridge, US Navy