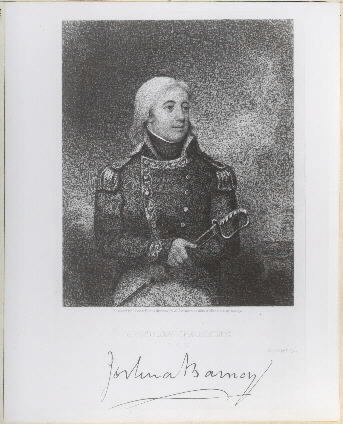 Joshua Barney was born in Baltimore, Maryland, on 6 July 1759, and died in Pittsburgh, Pennsylvania, 1 December 1818, having served with distinction in the Navy during both the Revolution and the War of 1812.

In February 1776, as master’s mate of Hornet, he took part in Commodore Hopkins’s descent upon New Providence. Later he served on Wasp and was made a lieutenant for gallantry in the action between that vessel and the British brig Tender. While serving on Andrew Doria he took a prominent part in the defense of the Delaware. Lieutenant Barney was taken prisoner several times and several times exchanged. In 1779 he was again taken prisoner and was imprisoned in Hill Prison in England until his escape in 1781. In 1782 he was put in command of the Pennsylvania ship, Hyder Ally, in which he captured the British ship, General Monk, a vessel of far heavier guns than his own. He was given command of this prize and sailed for France with dispatches for Benjamin Franklin, returning with the information that peace had been declared. After the Revolution he entered the French Navy, where he was made commander of a squadron. After a successful stint as the captain of the privateer Rossie early in the War of 1812, Barney devised a plan to defend the Chesapeake Bay that the Navy Department accepted. As a captain in the US Navy, he assembled, outfitted, and manned a flotilla of barges that served to delay but not deter the British forces from attacking Washington. After scuttling his vessels to prevent their capture, Barney and his flotillamen made a valiant but doomed attempt to repulse the British at Bladensburg, Maryland, on 24 August 1814. For his gallant conduct in the defense of the capital, he received a sword from the city of Philadelphia and the thanks of the legislature of Georgia. The wounds received in the battle of Bladensburg may have contributed to his death in Pittsburgh in 1818, which occurred while on his way to Kentucky where he planned to retire. His body is buried in Pittsburg's Allegheny Cemetery.