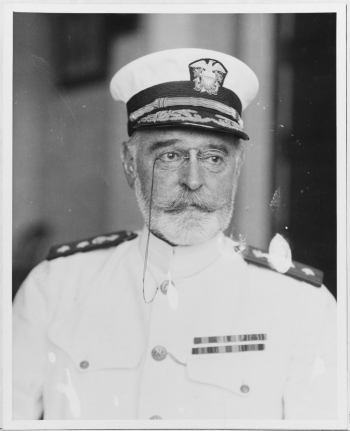 As Chief of Naval Operations, Admiral Eberle defeated efforts to separate air power from the Navy and worked to maintain a powerful cruiser force and to strengthen naval training.

Born in Denton, Texas, Admiral Eberle graduated from the U.S. Naval Academy in 1885. During a variety of assignments, including service in the Spanish American War and the world cruise of the Great White Fleet, he showed an aptitude for naval gunnery, wrote a manual for gun and torpedo drills, helped set up the first wireless telegraphs on naval vessels, developed tactical doctrine for destroyers, and experimented with deploying aircraft to locate submarines. During World War I he was Superintendent of the Naval Academy. He left the academy in 1919 to command the battleships divisions of the Atlantic Fleet and took command of the Pacific Fleet in 1921. As Chief of Naval Operations, he strongly advocated the integration of air power into the fleet, countering efforts to form an aviation corps separate from the Navy. He argued before Congress in favor of a shipbuilding program to remedy shortages in cruisers left after World War I. He sponsored strengthening the Naval Reserve structure and the establishment of the Naval Reserve Officer’s Training Corps (NROTC) in 1925. USS Admiral E. W. Eberle (AP-123) and USS Eberle (DD-430) were commissioned in his honor.