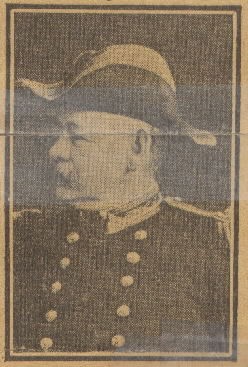 Alexander B. Bates was born in Brooklyn, New York, on 25 November 1842. He entered the United States Navy on 16 January 1863 as a third assistant engineer and served on the ironclad steamer Sagamore.

During the Spanish-American War Bates served on the battleship Texas as chief engineer. His ship was engaged several times with forts at Santiago and Guantanamo, Cuba. He was in the engagement with Admiral Cherver's fleet at the Battle of Santiago, for which he was advanced three numbers. It will be recalled that the Texas outdid herself in speed in the pursuit of the Spanish ships which, of course, was due to the energy and spirit of the engineering department of which Bates was the chief, and thus she was able to place herself to such advantage that she scored a high percentage of hits as compared with the other ships of the fleet.

Later he served as fleet engineer of a Pacific station and was engaged in the affairs of Samoa. He was appointed commander on 3 March 1899, and was ordered to steel inspection service. Afterward he was on duty at League Island. He received three stars for conspicuous service at the Battle of Santiago, Cuba. He was promoted to captain, and retired under the law as a rear admiral on 13 July 1903 after forty years of service.