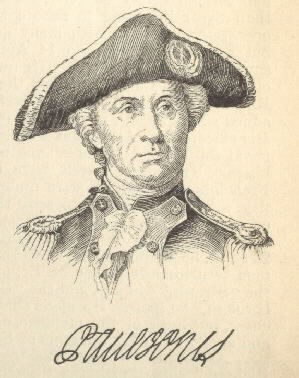 He was the son of John Paul, gardener at Arbigland. The name Jones was assumed about 1778.

At the age of twelve he went to sea, sailing from Whitehaven and visiting a brother, in Fredericksburg, Va. on his first voyage. While under twenty he served as mate in two vessels that were engaged in the slave-trade, but leaving this traffic in disgust, he sailed for England as a passenger. The death of two of the officers of the brig left him the only navigator on board, and he took charge and brought her into port. Her Scotch owners then employed him as master, and he made two voyages to the West Indies. In 1770 a charge of cruelty to one of his crew was made against him at Tobago, and, although it was dismissed as frivolous, the man's death a few weeks later caused it to be revived. Jones was not arrested, but the affair caused him much annoyance, and made him anxious to prove his innocence at home, for which purpose he sent affidavits to his family. The brother in Virginia died in 1773, and Jones took charge of his estate, proposing to settle at Fredericksburg. He now added the name of Jones to his signature for reasons which are unknown. He continued to correspond with his family, and to give his original name too much prominence for concealment.

When congress decided in 1775 to equip a navy "for the defence of American liberty," Jones was named as the senior 1st Lieutenant. He sailed from Delaware river in the Alfred in February, 1776, to attack New Providence. The expedition returned in April, and Jones was placed in command of the sloop Providence. He cruised for six weeks, capturing sixteen prizes, and doing some damage on the coast of Nova Scotia. Much address was required to escape from vessels of superior force, as his sloop was armed only with four-pounders. He was then given the Alfred, and made another successful cruise to the northward. Jones felt that he was not treated justly when congress undertook to establish the rank of naval officers, and his strenuous remonstrance to the marine board was somewhat arrogant in tone.

In March, 1777, he was appointed to the command of the Ranger, and sailed in her for France in November. The American commissioners at the French court gave him authority to "distress the enemies of the United States by sea or land," and, accordingly, he sailed from Brest, 10 April, 1779, took prizes in St. George's channel, and landed at Whitehaven, where he tried to burn the shipping with a view to cutting off the supply of coal for Ireland. He also attempted to capture the Earl of Selkirk. Off Carrickfergus he fell in with the Drake, a British man-of-war of 20 guns, which he captured after a close action lasting more than an hour. The Drake lost 42 men, including her captain and lieutenant, and was badly cut up, while the Ranger's loss was small.

Jones returned to Brest with his prizes, after a cruise of 28 days, which his boldness, nautical skill, and local knowledge had rendered very effective.

Jones spent more than a year in trying to raise a force for further operations, and met with many disappointments, but got to sea again on 14 Aug., 1779, with a squadron of four vessels. His own ship was an old Indiaman which he named the Bon Homme Richard. To her battery of twelve-pounders he added six eighteens, in ports cut in the gun-room. His officers were Americans without experience in naval duties, and his crew was a motley assemblage. The other vessels were commanded by Frenchmen, though all were under the American flag. A daring scheme to seize the shipping and exact a ransom at Leith was frustrated by a gale, which drove him out of the Forth. At last, on 23 Sept. he sighted a fleet of 40 British merchantmen returning from the Baltic, under convoy of the Serapis, 44 guns, and the Countess of Scarborough, 28 guns. He made signal for a general chase, but most of the merchantmen ran in shore and anchored under the guns of Scarborough castle. At seven in the evening the Bon Homme Richard closed with the Serapis, and began one of the most desperate conflicts on record. After a few broadsides they fouled and lay side by side until the fight was over. The Serapis let go an anchor to swing clear, but Jones lashed the two ships together to deprive the enemy of the advantage of his superior battery and sail power, and to prevent his retreat. Two of the Richard's eighteens had burst at the first fire, blowing up the deck and many of their crews. The fire of the Serapis silenced her opponent's main-deck battery, and crashed through her sides. Jones kept on fighting with a few light guns on the spar-deck, and musketry in the tops. A hand-grenade that was dropped from the main-yard of the Richard down a hatchway in the Serapis caused a terrible explosion on the lower deck. Jones drove back a boarding party, and the Scarborough struck her flag at half past ten at night. Each ship had nearly half her men killed or wounded.

Capt. Pearson, of the Serapis, reported that on going on board the Bon Homme Richard he "found her in the greatest distress, her counters and quarter driven in, all her lower-deck guns dismounted, on fire in two places, and six or seven feet of water in the hold." She had to be abandoned, and sank the next morning. The Alliance, commanded by Landais, fired indiscriminate broadsides of grape at both the contending ships, killing several of the Richard's crew. The Countess of Scarborough was taken by the Pallas, the only other ship engaged. Franklin commended "the sturdy, cool, and determined bravery" which Jones displayed in this action, and the victor was received with enthusiasm in France.

The king gave Jones a gold sword and the order of merit. He also received the thanks of congress and was designated by a unanimous vote to command the ship of the line that was then building. It was proposed to create the grade of rear-admiral for him, and he was considered "the principal hope of our future efforts on the ocean," as Jefferson styled him in 1788. But he had no further opportunity for active service under the American flag.

After visiting Denmark on public business, he entered the Russian service in 1788 with the rank of rear-admiral, reserving the right to return to the orders of congress when he should be called upon to do so. During a campaign against the Turks in the Liman he displayed his customary skill and energy. Disappointed in his hope of attaining an independent command, and baffled by intrigue, he returned to St. Petersburg, was granted an indefinite leave of absence, and returned to Paris in broken health.

In 1792 an appointment as commissioner and consul of the United States at Algiers was sent out, but he died before receiving it. The National convention sent a deputation to attend his funeral. Numerous apocryphal narratives of his life appeared in England and France, and these legends, and a variety of prejudices, have obscured the facts of his career. English writers denounced him as a pirate for a generation after his death, and still call him an adventurer. He would have resented either of these epithets. In 1779 John Adams thought him "ambitious and intriguing," and in 1813 referred to him as a "foreigner of the south, arrogating to himself merit that belongs to New England sailors." On the other hand, he seems to have retained the respect of Franklin, Jefferson, and Robert Morris, after a long acquaintance. His devotion to the flag of the United States is as unquestionable as his daring. He declared that America had been "the country of his fond election since the age of thirteen." His zeal for glory may have been allayed by a strain of restless vanity like that of other great seamen, but his conceptions of naval strategy and his appreciation of the value of intellectual culture for naval officers, are far in advance of his age and profession.

He left letters which are able and interesting in spite of their florid style and passionate assertion of his claims. He was always kind to his relatives in Scotland.

Jones was of medium height, active, but quiet in manner, with a soft voice and a keen eye.

JONES, John Paul, naval officer, was born at Arbigland, in the parish of Kirkbean, Kirkcudbright, Scotland, July 8, 1747. His grandfather and his father were market-gardeners. The latter had seven children, of whom John was the fifth. The family name was Paul, and the subject of this sketch was christened John Paul. He did not add the surname, Jones, until several years after he had become of age. The reason for the addition is not given. The eldest of the children, William Paul, emigrated to America and settled in Fredericksburg, Va. He died before the revolution, leaving a considerable fortune. Of the daughters, the eldest, Elizabeth, died unmarried; the second, Jeannette, married Mr. Taylor, a watchmaker in Dumfries; and the third, Mary Ann, was twice married--first to a Mr. Young, and afterward to a Mr. Louden. The birthplace of Paul Jones, the name by which he is best known, is situated near the shores of the Solway, in one of the most picturesque and beautiful localities of the frith. 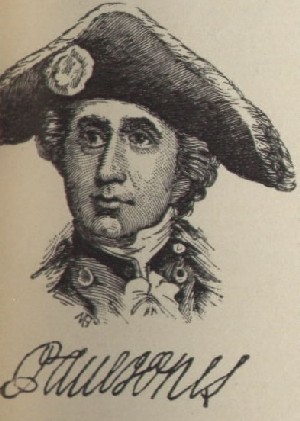