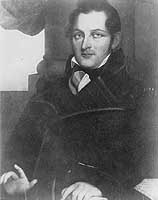 Melancthon Taylor Woolsey was born in 1782 near Plattsburg, New York. After studying law for a time, he entered the Navy as a Midshipman on 9 April 1800. His first assignment was the frigate Adams in which he made a cruise to the West Indies in 1800 and 1801. He served briefly in the Tripolitan War just before its end in 1805. In 1807, newly promoted Lieutenant Woolsey received orders to Washington, DC, where he developed a code of signals for the Navy. From there, he was ordered to the shores of Lake Ontario in 1808 for the purpose of supervising the construction of Oneida. At the same time, he received a concurrent assignment as the commanding officer of the shore facilities located there. When the United States went to war with Great Britain in 1812, he was still in command of Oneida and the shore station at Sackett's Harbor. On 19 July 1812, a British squadron of five ships appeared. Woolsey attempted to escape to open water with Oneida, but the enemy squadron sealed off that avenue. Instead, he returned to Sackett's Harbor, landed half his battery, and repelled the British convincingly after a sharp two-hour exchange.

Early in October, Commodore Isaac Chauncey arrived on the scene and assumed overall command of American naval activities on the Great Lakes. Woolsey stayed on as second in command and remained commanding officer of Oneida. During the fall of 1812, Woolsey concentrated upon the construction, purchase, and outfitting of additional war vessels. Throughout the entire war, a construction race caused naval dominance on Lake Ontario to alternate between the British and Americans. Woolsey enabled America to grab the lead in the fall of 1812 by acquiring eight schooners to augment Oneida and the three-gun Julia. On 8 November, he commanded Oneida when the 19-gun warship and four of the newly acquired schooners encountered HMS Royal George - a large, 24-gun, ship-rigged sloop-of-war off Kingston and chased her into that port. Later, they followed her in and subjected her to bombardment. In May 1813, Woolsey commanded Oneida as her guns supported the capture of York (Toronto) and the assault on Fort George.

Woolsey was promoted to master commandant in July 1813 and by August was in the new schooner Sylph. Late in September 1813, he commanded his ship in a running fight between the American lake flotilla and Commodore Yeo's British force. That series of skirmishes resulted in another period of American dominance of Lake Ontario. On 5 October, his ship participated in the capture of the enemy cutter Drummond and the sloops-of-war Elizabeth, Mary Ann, and Lady Gore off False Ducks. In May 1814, after a winter of feverish preparation for the third summer of campaigning, Woolsey went to the supply depot at Oswego to pick up guns, cables, and other supplies needed at Sackett's Harbor. While he was there, the British squadron appeared off Oswego. By spreading false intelligence about his destination, Woolsey was able to take advantage of a dark night and make good his escape. The British learned of their mistake and sought to overhaul him which they did at Sandy Creek. Woolsey, however, had prepared an ambush in concert with Major Daniel Appling and his 150-man contingent of the United States Rifle Regiment. The British landing force was soundly trounced by Appling's riflemen and 200 Indian allies. Woolsey, in turn, brought his guns to bear on the squadron itself. The Americans defeated the enemy convincingly, killing 10, wounding 52, and capturing the rest. Woolsey then proceeded to Sackett's Harbor with his ordnance and supplies. Soon thereafter, he assumed command of the new brig, Jones, and retained that command until the end of the war in 1815.

After the war, Master Commandant Woolsey remained at Lake Ontario in command of the naval station at Sacketts' Harbor. In 1816, he was promoted to captain. He left Sackett's Harbor in 1824 to assume command of the frigate, Constellation, which he took on a West Indies cruise until June of 1827. He took command of the navy yard at Pensacola, Fla., late in 1827 and held the position until 1831. Between 1832 and 1834, Woolsey served as commodore in command of the Brazilian Station. His last active duty took him to the Chesapeake Bay where he supervised surveys from 1836 until his health began to decline in 1837. Commodore Woolsey died at Utica, N.Y., on 18 May 1838.