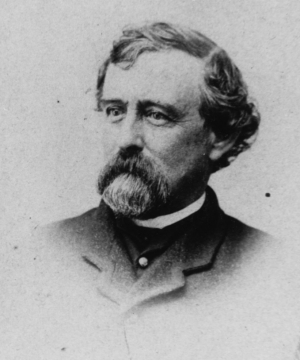 1844-1846
On cruise around the world, cut out several war junks under Fort Zuron Bay, Cochin, China.

1847-1848
Attached to the Home Squadron and participated in the captures of Vera Cruz, Tuspan, and Tobasco.

1849
18 May - Addressed at Boston. Detached from duty as Inspector of Provisions and Clothing at Boston, and to repair to Washington and report to the Secretary of the Treasury for duty on the Coast Survey.
23 June - Addressed on the Coast Survey at Elizabeth City, North Carolina. Appointed Chief of a Hydrographical Party on the Coast Survey, and to report for duty accordingly.
12 July - Addressed on Surveying Schooner John Y. Mason, Norfolk, Virginia. Letter of 2 July acknowledged (not located). Authorized to lay up schooner at Norfolk Navy Yard, and pay off and discharge such of the crew as not needed for the care of the vessel.
21 July - Addressed at Washington. Surveying schooner John Y. Mason having been laid up at Norfolk Navy Yard to consider himself as detached from the command of her, but to remain attached to the Coast Survey "on other duty."
26 September - Wrote from Coast Survey Station, near Portland, requesting additional officers for the party under hi command on the Coast Survey.
2 October - Addressed as commanding John Y. Mason. Letter of 26 September acknowledged. Authorized to enlist 2 quartermasters, 1 officer's steward, 1 officer's cook, and 11 seamen for service on board.
10 October - Wrote from Washington asking if Department had intended to revoke his appointment as Chief of a Hydrographic Party on the Coast Survey when the order was given detaching him from command of the John Y. Mason.
13 October - Addressed at Washington. Ordered to proceed to Norfolk and take command of schooner John Y. Mason, attached to the Coast Survey.
25 October - Wrote from John Y. Mason, Elizabeth City, North Carolina, requesting that the Purser of the Receiving Ship at Norfolk be authorized to furnish him with funds to pay the men of his party and for provisions; $500 sufficient.
29 October - Addressed commanding schooner John Y. Mason, Elizabeth City, North Carolina. Letter of 25 October acknowledged. Informed that the Purser of the Receiving Ship at Norfolk could not be ordered to furnish any officer with money in advance. The crew should be borne on the books of the purser of the Receiving Ship and their accounts would then be settled by the Purser.
18 December - Addressed commanding the steamer Walker. Informed that orders had been given that day to the Commandant at Pensacola to enlist a crew for the surveying steamer Walker; men to be selected by himself, and accounts to be retained on the books of the Purser of the Pensacola Navy Yard.

1850
19 June - Addressed at Washington. Detached from command of US Surveying Schooner Walker, but to remain attached to the Coast Survey "on other duty."
11 October - Wrote from Coast Survey Office, Washington, requesting instructions to the commanding officer at the Rendezvous, Baltimore, to ship a crew for the Coast Survey Steamer Walker for one year. Submitted list; several officers required also.
14 October - Addressed at Baltimore. His undated letter acknowledged. Informed that Commodore Buchanan was authorized to enlist a crew for the Walker; the men to be selected by himself, transferred to USS Ontario at Baltimore, and accounts kept on board.
19 October - Wrote from Walker, Baltimore, relative to enlistments on Walker
9 November - Addressed commanding Steamer Walker at Baltimore. Letter of 8 November acknowledged. The Commandant at New York to be instructed to make up the complement required.
10 December - Wrote from Walker, Baltimore, requesting that his accounts be transferred from Baltimore to Pensacola.

1851
9 January - Wrote from Walker, Pensacola Navy Yard, forwarding an application from an Acting Master on board, and requesting that it not be complied with, as his services were much needed.
13 January - Wrote from Walker, Pensacola Navy Yard, requesting permission to replace boat lost on way down from those not in use at the Navy Yard.
29 January - Addressed commanding Steamer Walker, Coast Survey. Letter of 14 January acknowledged. Authorized to rate 1 Boatswain's Mate, 1 officer's cook, 1 officer's steward and 2 quartermasters, as recommended. His course in shipping extra men in William A. Graham approved.
19 February - Wrote from Coast Survey Office, Washington. The Hydrography of the western coast having been placed under his charge and an additional vessel having been put on the work, requested the assignment of Lieutenant Stevens to join the Ewing.
6 March - Wrote from Coast Survey Office, Washington, requesting orders for Passed Midshipman Cuyler as Acting Master for the Ewing at San Francisco.
20 March - Wrote from Charlestown, Massachusetts. Having been assigned duty on the western coast and being on the eve of departure, requested permission to draw 4 months' pay in advance from the Navy Agent in Boston.
24 March - Addressed at Charlestown, Massachusetts. Letter of 20 March acknowledged; the Navy Agent at Boston directed to advance him 4 months' pay from 1 April.
22 October - Wrote from Coast Survey Steamer Ewing, San Francisco, relative to the charter of the steamer Quickstep in consequence of the loss of the Jefferson.

1853
4 May - Wrote from Active, Bay of San Francisco, relative to the inconvenient location of the Purser's office.

1855
18 December - Wrote from the Active, Olympia, Washington, reporting his arrival agreeable to instructions from Commodore Mervine of 29 November. Had communicated with the Acting Governor of the Territory, and the senior naval and military officers present, and found operations against the Indians for the most part ceased for the winter, owing to the small force that could be brought into the field and the condition of the country, which was almost impassable from the incessant rains. The presence of the vessel had given great satisfaction to the settlers on the Sound, and he hoped by keeping on the move for a month or two their confidence would be sufficiently restored for him to return to his duties on the survey. He would probably be sent back in the spring when active operations commenced; would be happy to participate if the Department and the Superintendent of the Survey deemed it advisable.

1856
7 January - Wrote from Active, Steilacoom, W.T., in accordance with the instructions of Commodore Mervine to report all matters of importance to the Department concerning cooperation with Commander Gansevoort and the forces under Major General Wool. On his arrival the evening before from coaling at Vancouver's Island was informed that 30 or 40 hostile Indians, including al but 2 or 3 of the principal chiefs had crossed the Sound from the mouth of the Puyalup River, and were there tampering with 400 or 500 friendly Indians on the "reserve," about 7 miles from Steilacoom. Reported his actions.
12 January - Wrote from the Active, Olympia, W.T. relative to Commander Gansevoort's criticism of his actions.
15 January - Wrote from Active, Seattle, to Gansevoort inclosing copies of letters relative to his actions.
20 March - Wrote from the Active, San Francisco, informing the Department he had left Puget Sound in Obedience to orders of Commander Swartwout on 15 March and arrived at San Francisco on the evening of 19 March to resume his duties on the Coast Survey.
11 September - Addressed as commanding officer Coast Guard Survey Steamer Active, San Francisco, relative to detachment of a certain officer; detachment unconditional.
14 October - Wrote from the Active, San Francisco, acknowledging receipt of commission as Commander.
19 November - Wrote from USS Decatur, off San Francisco, with other officers relative to the similarity of the uniforms of Line Officers and civil officers of the survey.
17 December - Addressed with others at San Francisco, relative to uniforms.

1860
29 September - Addressed at San Francisco. Detached from the command of the Active on reporting his successor, and wait orders.
5 November - Wrote from Charlestown, Massachusetts, having been informed by the Superintendent of the Coast Survey that he had forwarded to San Francisco orders from the Navy Department detaching him from the Coast Survey (some time subsequent, however, to his own instructions for his return to the Atlantic States), he embraced the earliest opportunity to report his arrival and to inform the Department of his place of residence, at present No. 137 Main Street, Charlestown, MA.

1861-1865
Civil War service: 1861 commanded the USS South Carolina which reinforced Fort Pickens. Commanded USS Richmond, West Gulf Blockading Squadron, at passage of the forts below New Orleans, April 1862, and was actively engaged in operations on the Mississippi River and at Mobile Bay with Admiral Farragut. December 1864 and January 1865 participated in the attacks on Fort Fisher.

1869- 1871
Chief of Bureau of Navigation. Appointed Rear Admiral 19 June 1871. Made his first cruise in the Mediterranean Squadron.