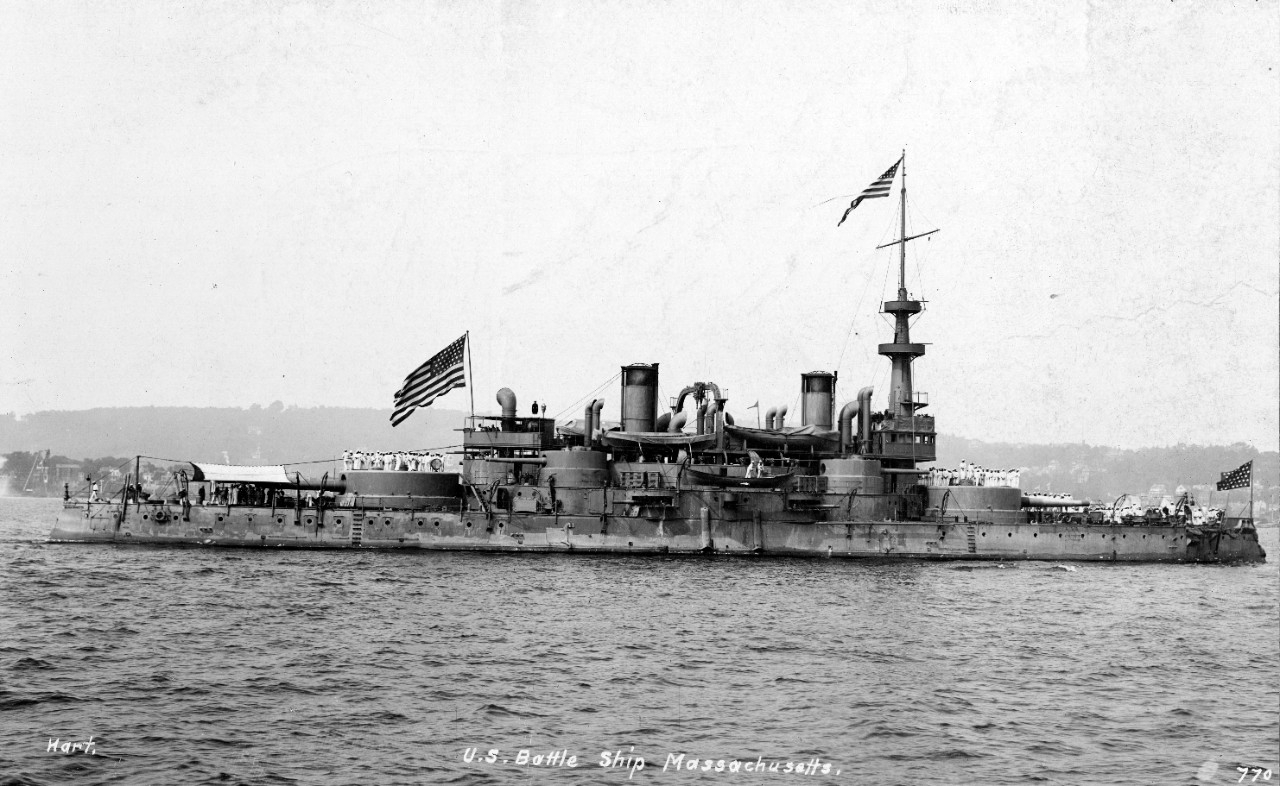 One of the Thirteen Original States of the Union, the Commonwealth of Massachusetts ratified the Constitution 6 February 1788.

Underway for shakedown 4 August 1896, Massachusetts conducted trials and maneuvers off the middle Atlantic coast until 30 November, when she entered New York Navy Yard for overhaul. Following a brief voyage to Charleston, S.C., 12 to 20 February 1897, the battleship departed New York 26 May for Boston, arriving 2 days later for a celebration in her honor, including the presentation of the Massachusetts Coat of Arms 16 June, and a gift of a statue of victory the next day. She departed Boston on the 19th to cruise to St. Johns, Newfoundland, arriving 23 June. Sailing on the 28th the warship operated off the Atlantic coast for the next 10 months, participating in training maneuvers with the North Atlantic Squadron off Florida, and making calls at major east coast ports. On 27 March 1898, she was ordered to Hampton Roads, Va., to join the "Flying Squadron" for the blockade of Cuba.

Massachusetts departed Norfolk 13 May for Cienfuegos, Cuba, where she took up blockade duties on the 22d. On the afternoon of 31 May in company with battleship Iowa (Battleship No. 4) and cruiser New Orleans, she bombarded the forts at the entrance to Santiago de Cuba, and exchanged fire with Spanish cruiser Cristobal Colon, forcing the enemy ship to retire into the inner harbor of Santiago. The battleship remained on patrol off Santiago, intermittently bombarding Spanish fortifications, until 3 July, when she stood out to coal at Guantanamo Bay. Missing the Battle of Santiago, the battleship steamed back to her station on the 4th, arriving in time to help battleship Texas force cruiser Reina Mercedes to beach and surrender at midnight 6 July. Following duty in support of the American occupation of Puerto Rico, 21 July to 1 August, Massachusetts steamed for home, arriving New York 20 August

During the next 7 years, Massachusetts cruised the Atlantic coast and eastern Caribbean as a member of the North Atlantic Squadron. From 27 May to 30 August 1904, the warship served as a training ship for Naval Academy midshipmen off New England and then entered New York Yard for overhaul. Departing New York 13 January 1905, the battlewagon then steamed for the Caribbean on training maneuvers, operating there until she returned north to cruise off New England in May. Putting into New York 12 November 1905, she underwent inactivation overhaul and then decommissioned 8 January 1906.

Massachusetts was placed in reduced commission 2 May 1910 to serve as a summer practice ship for Naval Academy midshipmen. During the next 4 years she made three midshipman cruises, twice to Western Europe, before entering the Atlantic Reserve Fleet in September 1912. Following a brief voyage to New York 5 to 16 October for the Presidential Fleet Review, the warship returned to Philadelphia where she remained until decommissioning 23 May 1914.

Massachusetts recommissioned 9 June 1917 at Philadelphia. Sailing 9 October, she arrived at the Naval Training Station, Newport, R.I., on the 15th, where she embarked Naval Reserve guncrews for gunnery training in Block Island Sound. Continuing on this duty until 27 May 1918, the old battleship then underwent repairs at Philadelphia Navy Yard. Assigned to battle practice, "A" Division, Battleship Force 1, Atlantic Fleet, 9 June 1918, the veteran battlewagon steamed to Yorktown, Va., the same day, and for the remainder of World War I served as a heavy gun target practice ship in Chesapeake Bay and local Atlantic waters. Massachusetts returned to Philadelphia 16 February 1919. Redesignated Coast Battleship No. 2, 29 March, the warship decommissioned for the final time on the 31st. She was struck from the Navy list 22 November 1920 and loaned to the War Department as a target ship. Scuttled off Pensacola Bar, Fla., 6 January 1921, the hulk was bombarded by batteries from Fort Pickens for 4 years and then returned to the Navy 20 February 1925. Though offered for sale for scrap, no acceptable bids were received and finally, on 15 November 1956, the ship was declared the property of the state of Florida.