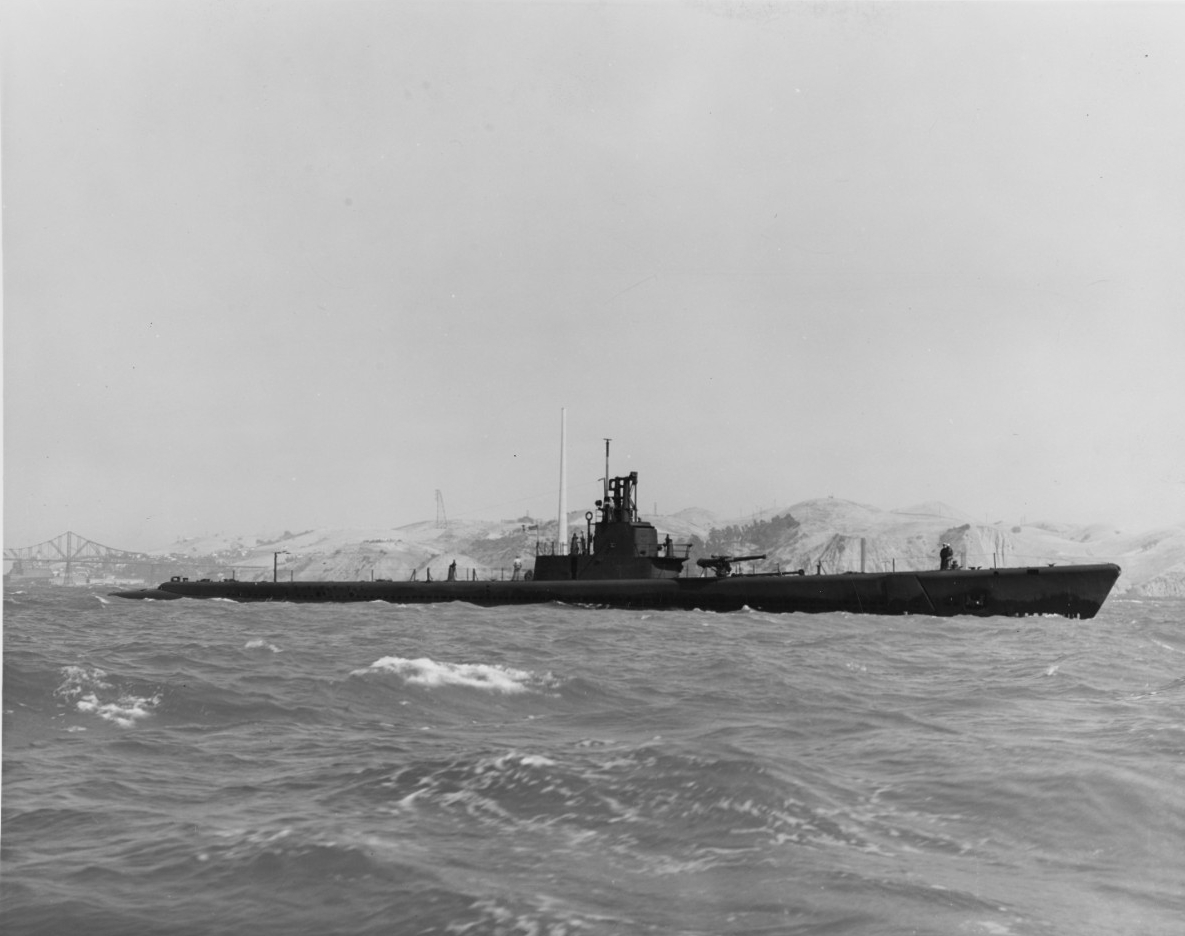 USS Wahoo (SS-238) was commissioned 15 May 1942, and on 12 August was bound for Pearl Harbor, Hawaii, where the submarine conducted intensive training. On 23 August, Wahoo was underway for her first war patrol. Although the submarine made enemy contact, torpedoes missing their target plagued Wahoo’s first patrol. The submarine arrived back at Pearl Harbor on 17 October for refit and overhaul.

On 8 November, Wahoo was underway to her assigned area in the Solomon Islands keeping in sight Bougainville and the Buka Islands for her second war patrol. After patrolling the area for 17 days with little to no action, the submarine’s commander, Lieutenant Commander Marvin G. Kennedy, decided to proceed to the route between Truk and the Shortlands for a few days, but this proved fruitless as well. On 10 December, while making her return trip to her assigned area of operations, Wahoo encountered an enemy convoy escorted by a destroyer. Wahoo fired a spread of four torpedoes at the largest tanker Kamoi Maru scoring three hits, which would eventually sink the ship a few hours later. After the successful attack, the enemy destroyer made way towards Wahoo and dropped approximately 40 depth charges, but it only caused minor damage to the submarine. After the enemy attack, the commander decided to move into a new area away from the convoy.

On 31 December, Lieutenant Commander Dudley W. “Mush” Morton took command of Wahoo. Morton served as executive officer for Wahoo’s first two war patrols. Before departing on the boat’s third war patrol, Morton gave a rousing pep talk to the crew. “Wahoo is expendable. We will take every reasonable precaution, but our mission is to sink enemy shipping. . . . Now, if anyone doesn't want to go along under these conditions, just see the yeoman. I am giving him verbal authority now to transfer anyone who is not a volunteer. . . . Nothing will ever be said about you remaining in Brisbane.” Not one member of the crew asked for a transfer. Morton was considered an innovative leader and one of his initiatives was to have his executive officer, Lt. Dick O’Kane, man the periscope. Few captains had enough faith in a junior officer to operate the periscope, but Morton saw something in O’Kane. Later in the war, O’Kane would receive the Medal of Honor for his leadership as commander of USS Tang (SS-306).

On 16 January 1943, Wahoo was underway on her third war patrol with her escort, USS Patterson (DD-392), headed for a Japanese supply base on the north coast of New Guinea. Their mission was to recon Wewak, but Wahoo had no charts of the harbor. Luckily, a member of the crew had bought a cheap atlas while they were in Australia. It had a map of New Guinea with a small indentation labeled Wewak. With that as a reference, Morton began to make plans for the mission, but to the amazement of the crew, Morton’s interpretation of recon meant destroy any enemy ship they could find. On 24 January, Wahoo spotted a destroyer with submarines around it. Morton fired three torpedoes on the destroyer, but they missed. Wahoo watched as the destroyer headed its way, and at dangerously close range, Wahoo fired another torpedo that broke the enemy ship in half. A few days later, Wahoo encountered another convoy and was credited with sinking Buyo Maru, Fukuei Maru, and an unknown maru. On 7 February, Wahoo arrived at Pearl Harbor to a hero’s welcome. Morton was nicknamed “The One-Boat Wolf Pack.” He received the Navy Cross, and General of the Army Douglas MacArthur presented to him the Army Distinguished Service Cross.

On 23 February, Wahoo was underway for her fourth war patrol to an area never before patrolled by United States submarines—the extreme northern reaches of the Yellow Sea. The trip was unique in that Wahoo did not see a single aircraft thus making the entire trip on the surface. Later in the patrol, combat operations commenced on 19 March when Wahoo sent Japanese freighter Zogen Maru below the waves. Four hours later, the submarine spotted Kowa Maru and fired, but Wahoo’s torpedoes failed to sink the ship due to a defect. While patrolling off the Korean coast on 21 March, Wahoo sent freighter Hozen Maru to the ocean’s floor and four hours later sank Nittsu Maru. Wahoo would go on to sink four more enemy vessels to conclude the war patrol.

Wahoo’s fifth war patrol was again hailed as outstanding in aggressiveness and efficiency. In just 10 days, Wahoo launched 10 torpedo attacks on eight different targets. Wahoo sank a total of 93,281 tons of shipping and damaged 30,880 more in only 25 days of the patrol. The patrol was Morton’s third as commander of the boat establishing a record not only in damage inflicted on the enemy for three successive patrols, but also for accomplishing this feat in the shortest time. Morton received a gold star, in lieu of a second Navy Cross, from Commander in Chief of the Pacific Fleet Admiral Chester W. Nimitz.

After intensive post-repair trials and training, Wahoo departed on her sixth war patrol. The patrol’s beginnings were marked by the worst possible luck with torpedoes. Within four days, 12 Japanese vessels were sighted and nine were hunted down and attacked to no avail. The torpedoes either broached, made erratic runs, or were just duds. Morton reported their poor performance and was ordered to return to base.

Morton was profoundly upset about the last patrol. He requested return to the Sea of Japan, and it was granted. On 9 September, Wahoo was underway from Pearl Harbor to La Perouse Strait. Once the legendary boat reached its destination, the plan was for Wahoo to enter the Sea of Japan first accompanied by USS Sawfish (SS-276). On 21 October, Wahoo was to head for home, but nothing was ever heard from Morton or Wahoo again. According to Japanese military records, Morton sank four ships amounting to about 13,000 tons on their final patrol. Japanese records also reported on 11 October that an antisubmarine aircraft discovered a surfaced submarine where Wahoo was estimated to be located and attacked, dropping three depth charges.

The loss of Morton sent shock waves among the submarine force and triggered a change tactics in the Sea of Japan. It would not be until June 1945 when submarines would return and that was with special mine detecting equipment. In postwar accounting, “Mush” Morton sank 19 ships for approximately 55,000 tons of enemy shipping. In terms of individual ships sunk, he was one of the top three skippers of the war. Morton received another Navy Cross posthumously. Wahoo earned six battle stars for her World War II service. 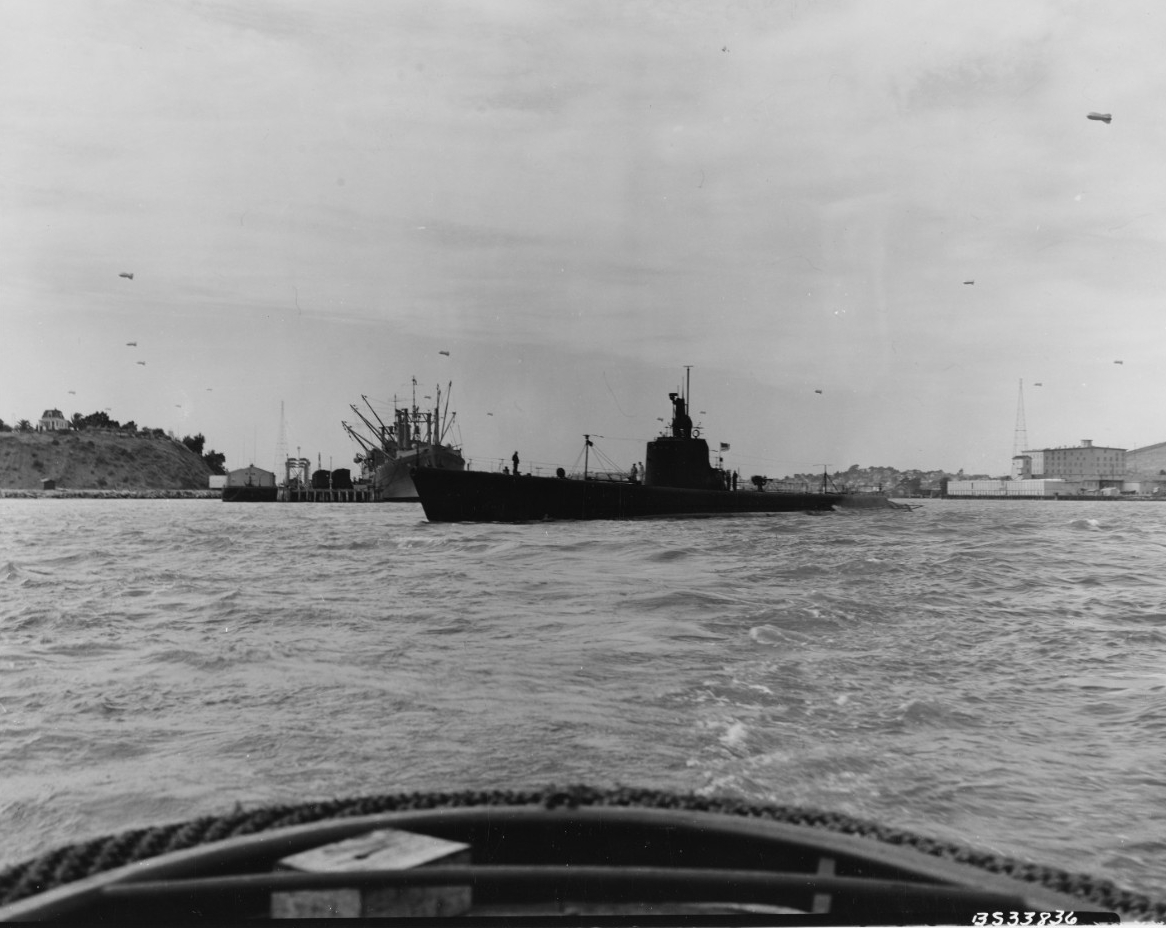 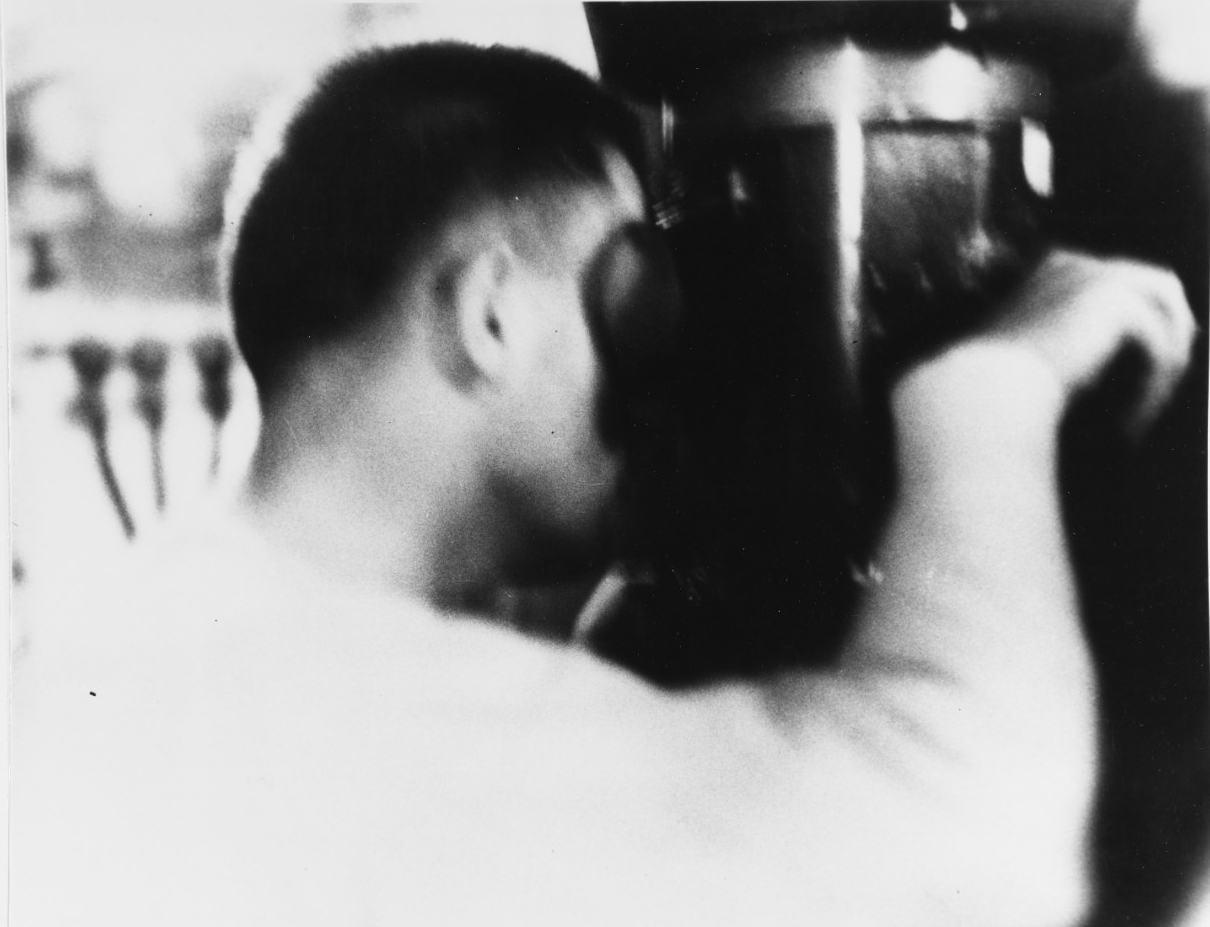 Lieutenant Richard H. O'Kane, executive officer, at the periscope during Wahoo's (SS-238) attack on a Japanese convoy north of New Guinea, 26 January 1943. Several ships, among them the transport Buyo Maru, were sunk in the action. Official U.S. Navy photograph now in the collections of the National Archives, 80-G-37034. 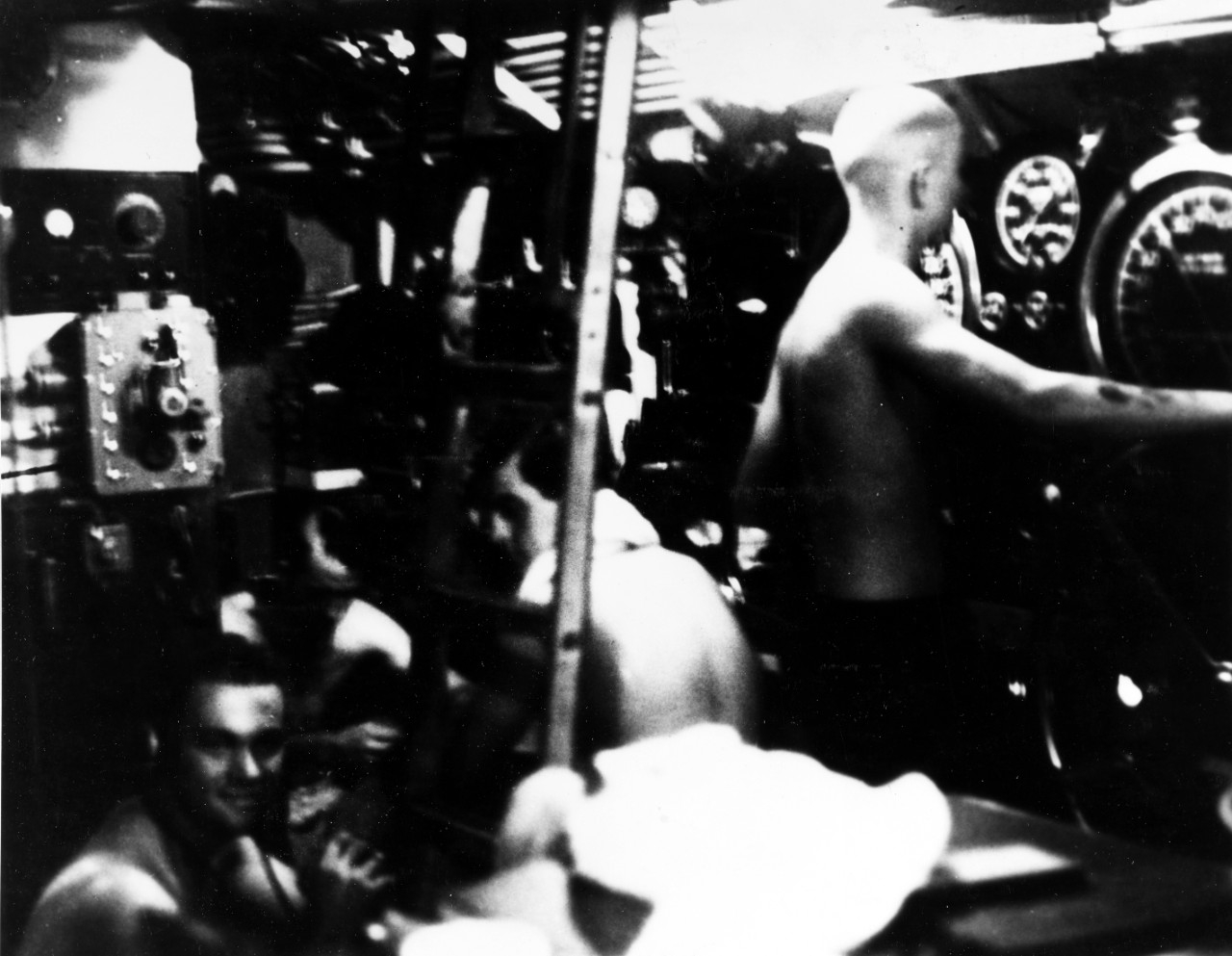 Scene in the control room during Wahoo's (SS-238) 27 January 1943 action with a Japanese destroyer. When the photo was taken the submarine was at 300 feet, rigged for depth charges. Six charges had just gone off and the crew was awaiting more charges. Lieutenant Commander Dudley W. Morton, Wahoo's commanding officer, reported this action as “another running gun fight ... destroyer gunning ... Wahoo running.” Official U.S. Navy photograph now in the collections of the National Archives, 80-G-38602. 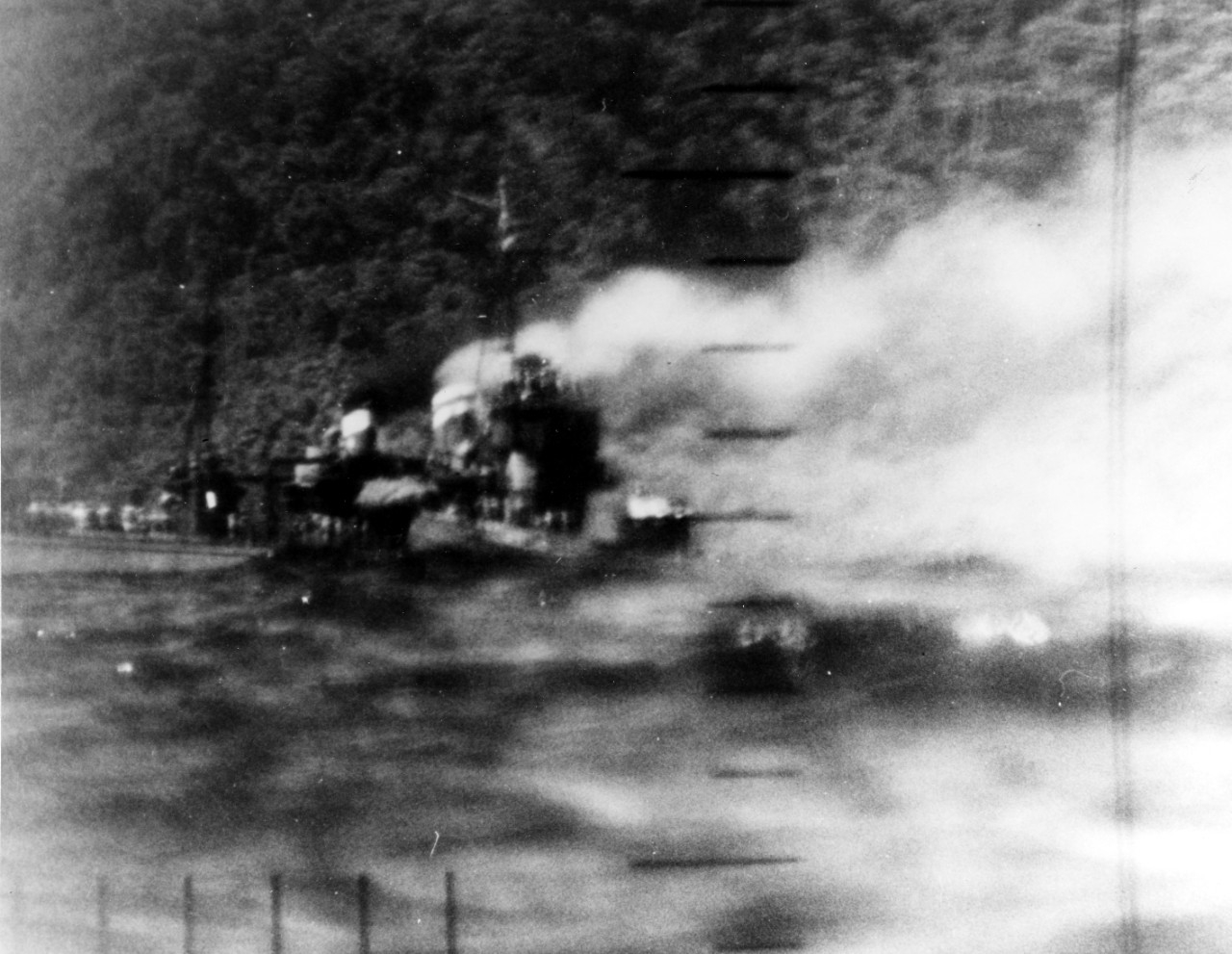 Periscope photograph taken of Japanese destroyer Harusame from USS Wahoo (SS-238) after she had been torpedoed by the submarine near Wewak, New Guinea, on 24 January 1943. Harusame's back is clearly broken, but she was repaired and returned to service despite the heavy damage. Official U.S. Navy photograph now in the collections of the National Archives, 80-G-35738. 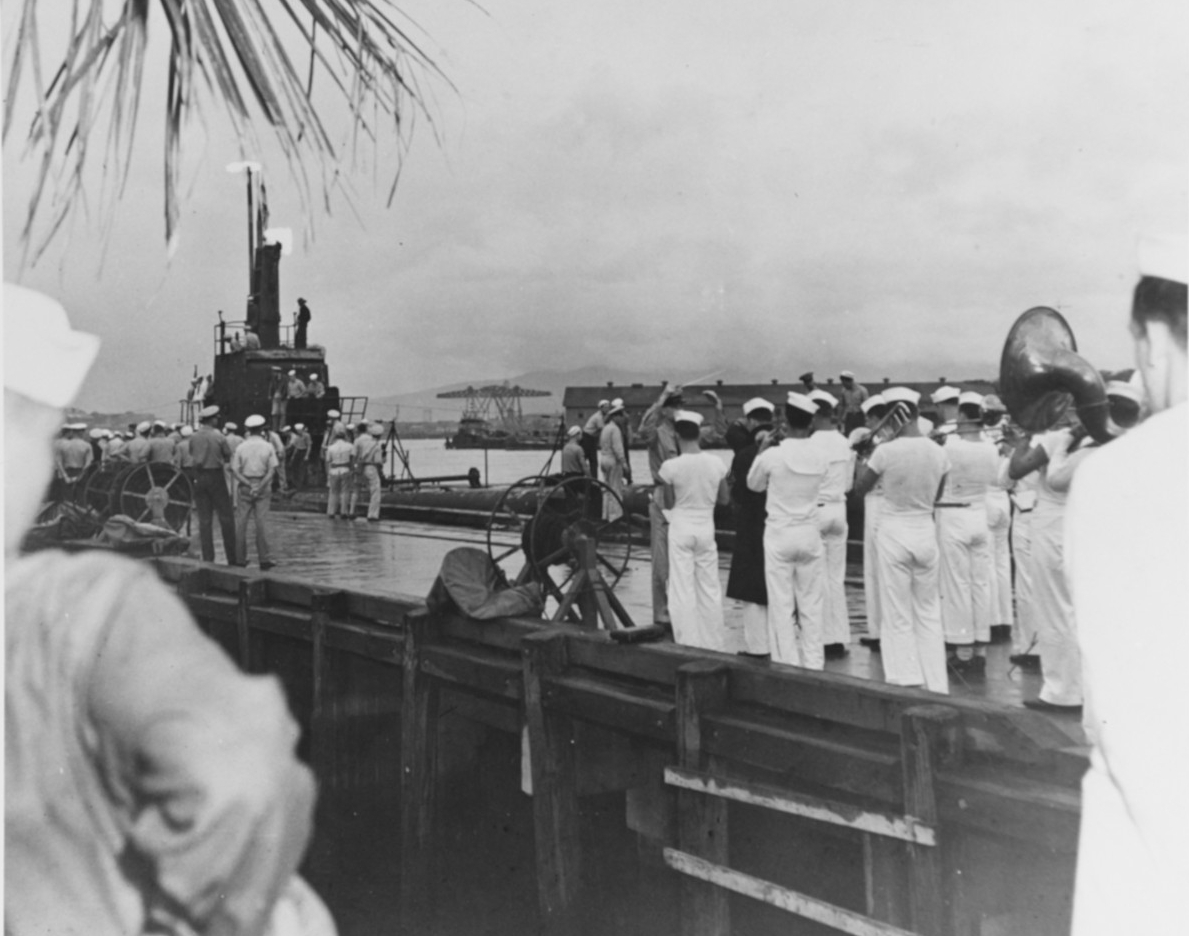 USS Wahoo (SS-238) arrived at Pearl Harbor, Hawaii, at the end of her third war patrol, circa 7 February 1943. The original caption, released with this photograph on 3 March 1943, read, “Hero's Welcome. A Navy band is on hand to greet the submarine Wahoo on her return to Pearl Harbor following a patrol during which she sank a Japanese destroyer and an entire enemy convoy of four ships. The battle with the convoy lasted for a period of 14 hours.” Official U.S. Navy photograph from the collections of the Naval History and Heritage Command, NH 42274. 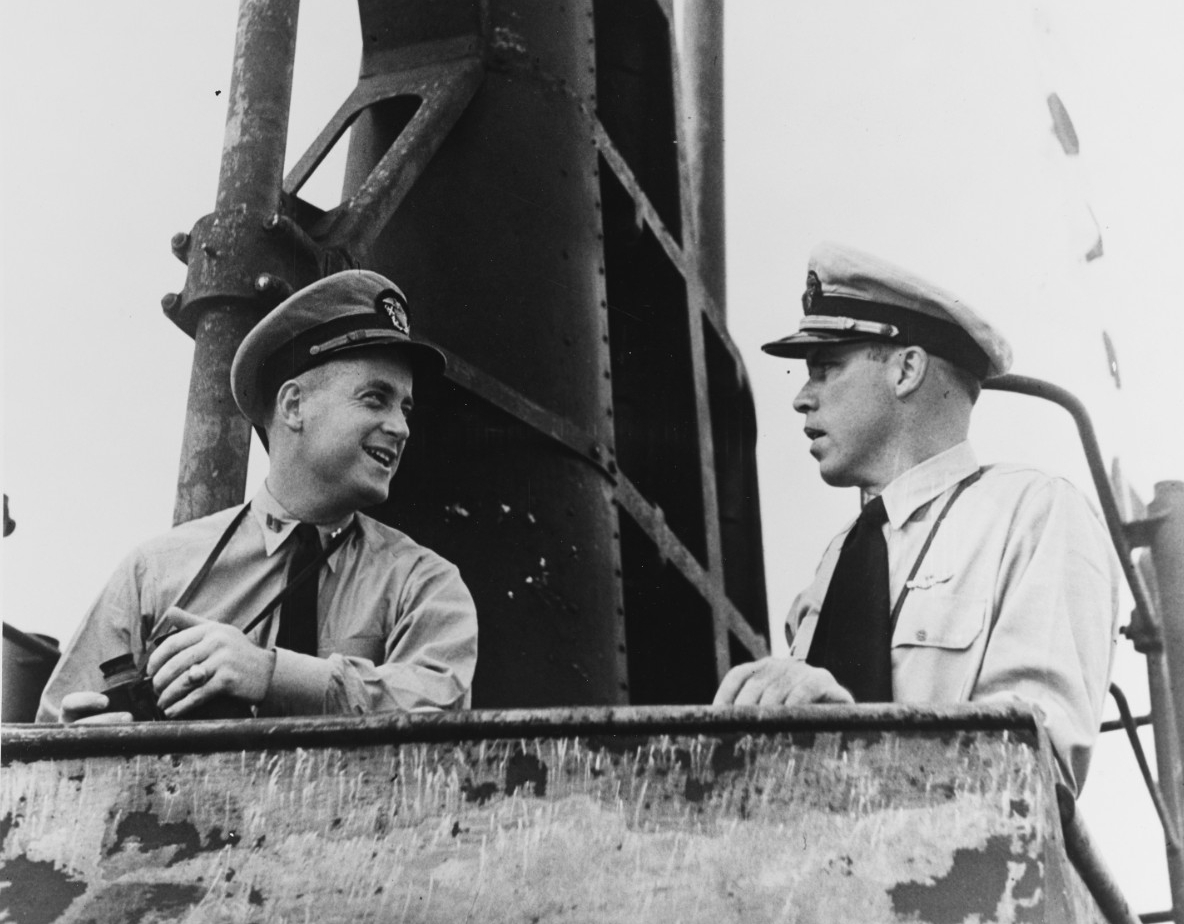 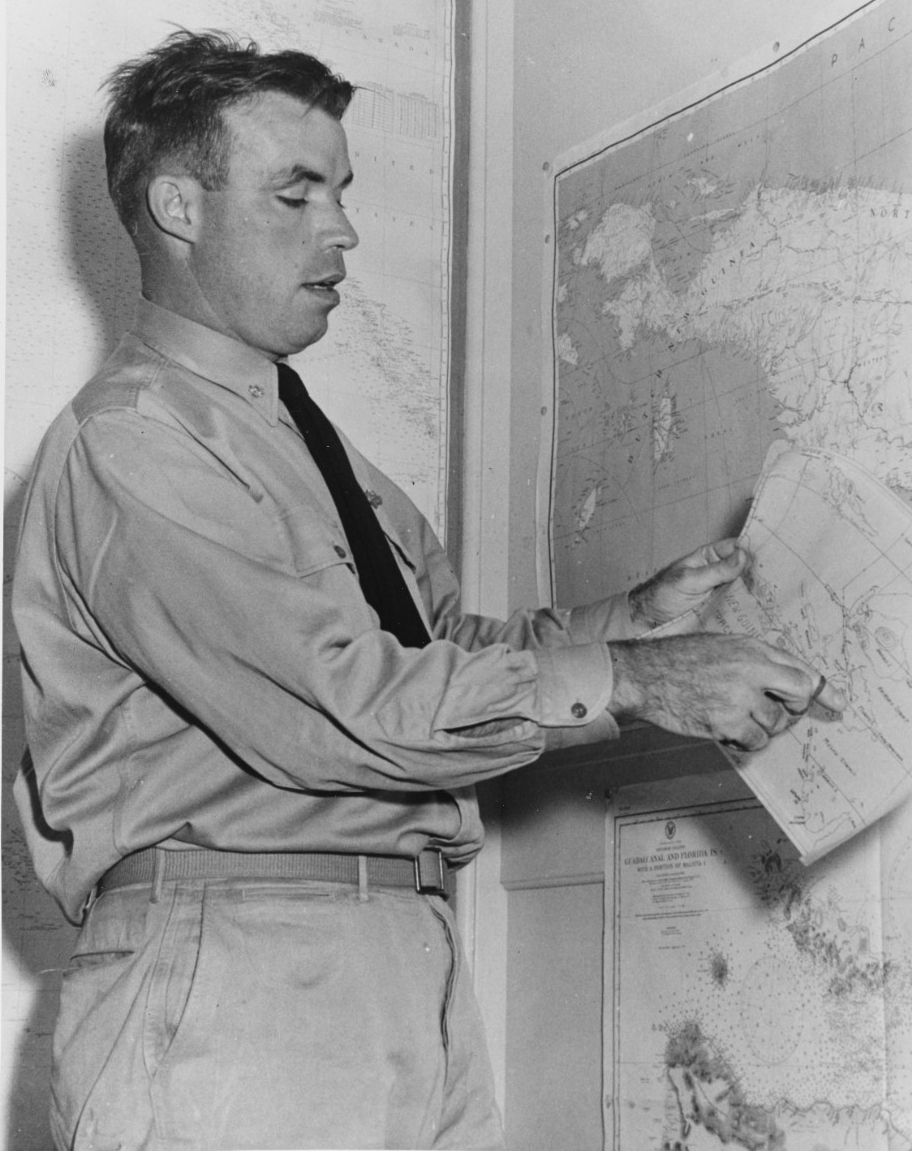 Lieutenant Commander Dudley W. Morton, commanding officer of USS Wahoo (SS-238), described his submarine's successful third war patrol during a press conference at Pearl Harbor, Hawaii, circa mid-February 1943. He was holding a rough chart of what appears to be a small part of the northern New Guinea coast. On the wall at right are charts of western New Guinea and of the Iron Bottom Sound area between Guadalcanal and Tulagi. Official U.S. Navy photograph now in the collections of the National Archives, 80-G-35733. 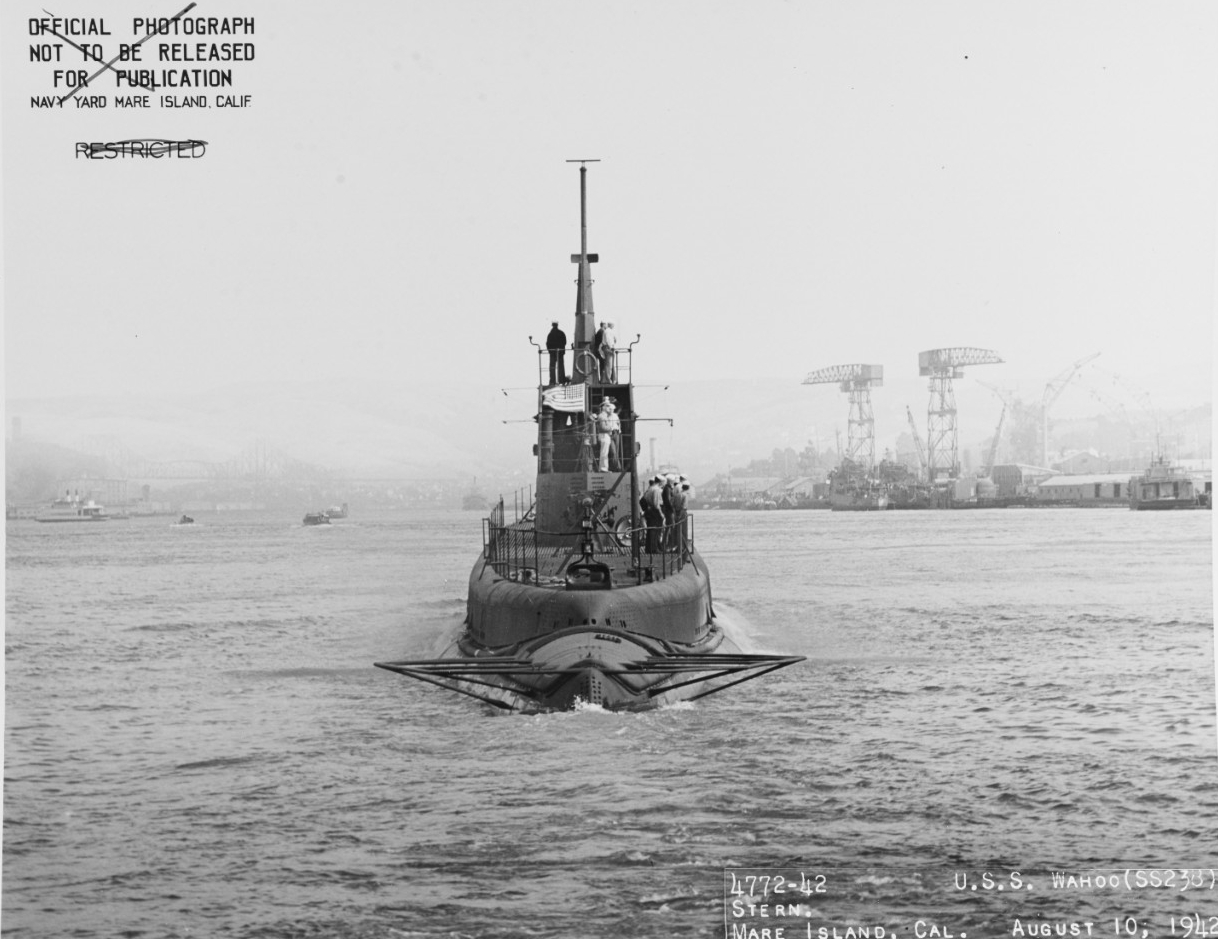 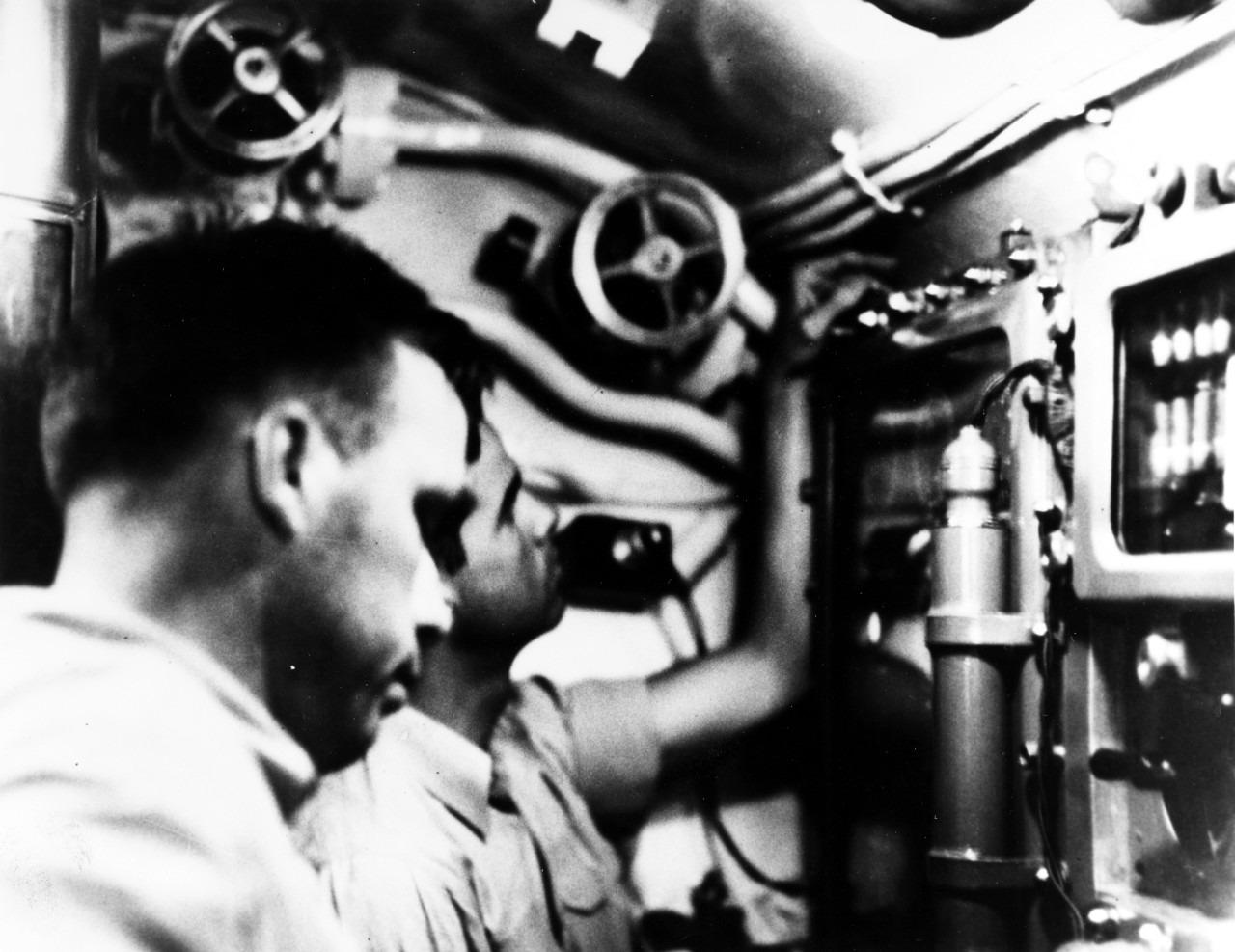 Lieutenant Commander Dudley W. Morton, commanding officer, with another officer (probably Lieutenant Richard H. O'Kane), in Wahoo's (SS-238) conning tower during her attack on a Japanese convoy north of New Guinea, 26 January 1943. Several ships, among them the transport Buyo Maru, were sunk in the action. Official U.S. Navy photograph now in the collections of the National Archives, 80-G-37033. 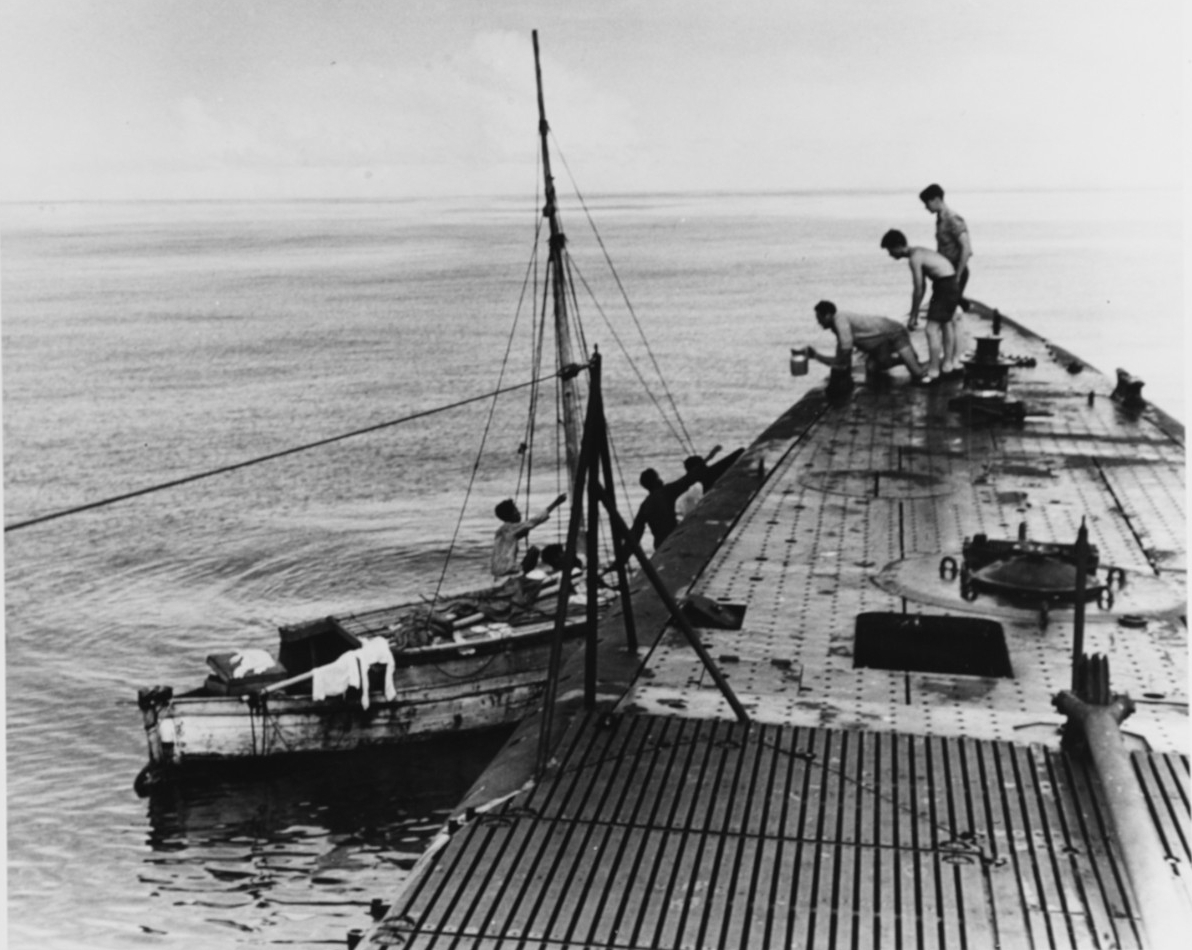 USS Wahoo (SS-238) provided food and water to the crew of a fishing boat, circa January 1943. The original caption, released with this photograph on 3 March 1943, read, “Act of Mercy. While on the war patrol during, which she sank a Japanese destroyer and a convoy of four ships, the submarine Wahoo, commanded by Lt. Cmdr. Dudley W. Morton, USN, of Miami, Florida, came across a small fishing boat, becalmed. Three of the crew of nine aboard the fishing vessel had died when the submarine found her. Three remaining crewmembers were without food and water. This picture shows members of the submarine's crew handing water and food to the men in the fishing vessel. A few days later, Wahoo destroyed a Japanese destroyer and convoy.” Official U.S. Navy photograph from the collections of the Naval History and Heritage Command, NH 42275. 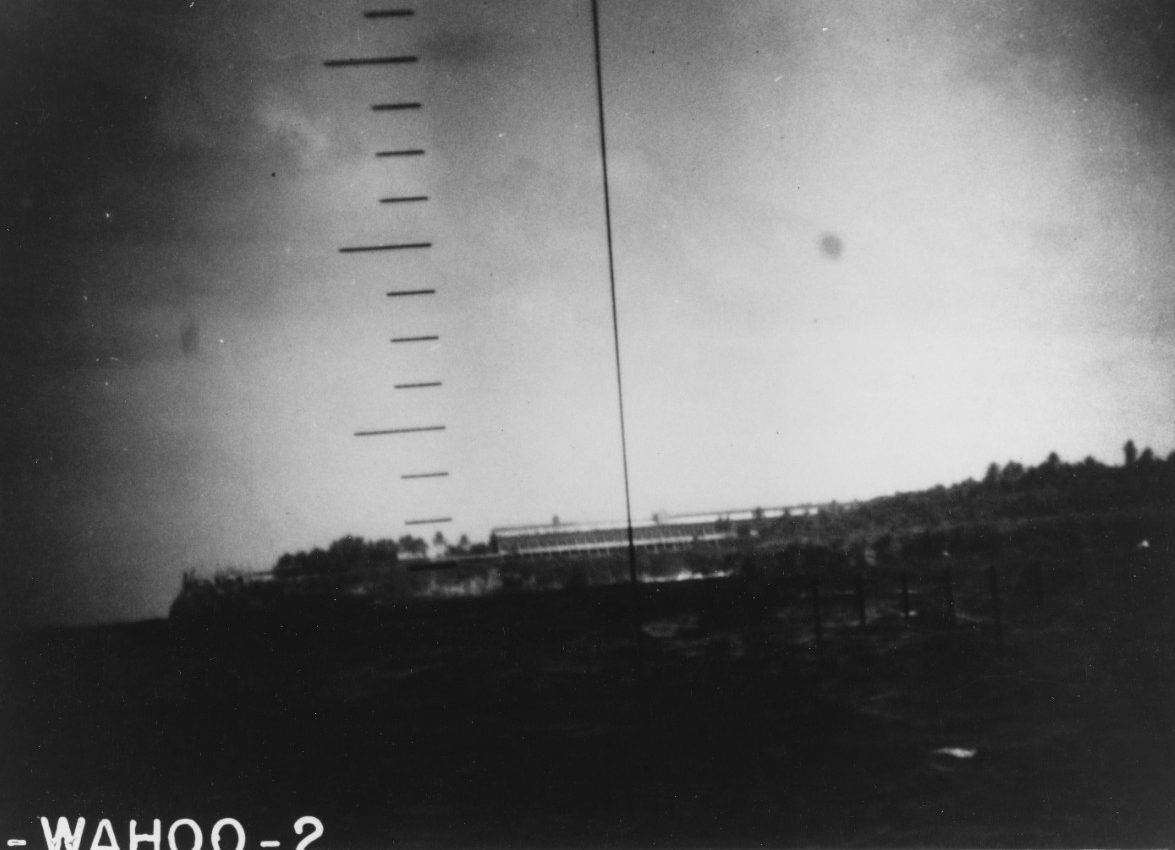 Periscope photograph, taken by USS Wahoo (SS-238) on 27 January 1943. The view shows a refinery and large warehouse adjacent to a phosphate works on Fais Island (near Ulithi Atoll, Caroline Islands). Wahoo had intended to shell the latter, but had to break off when an enemy ship came on the scene. Official U.S. Navy photograph now in the collections of the National Archives, 80-G-39745. 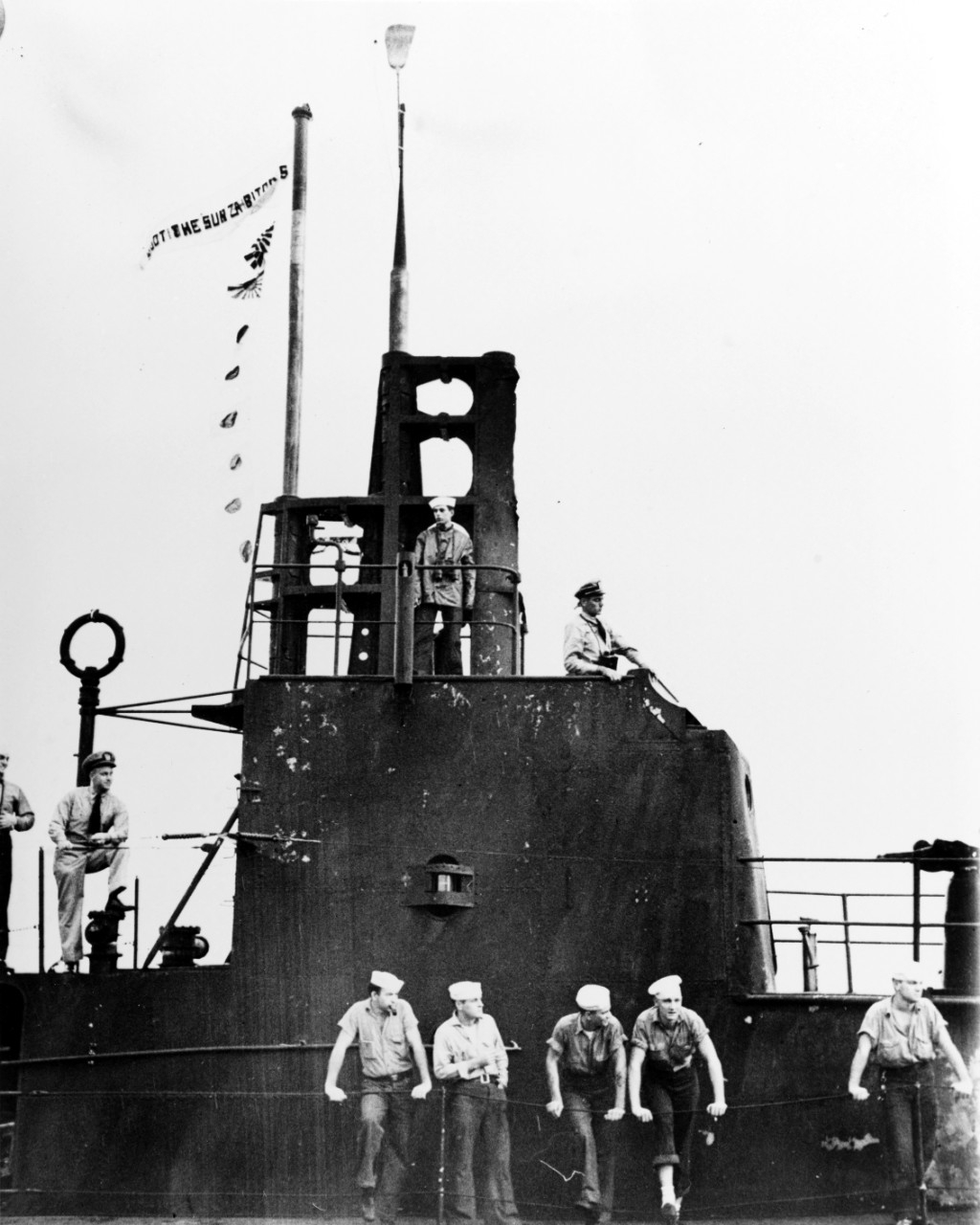 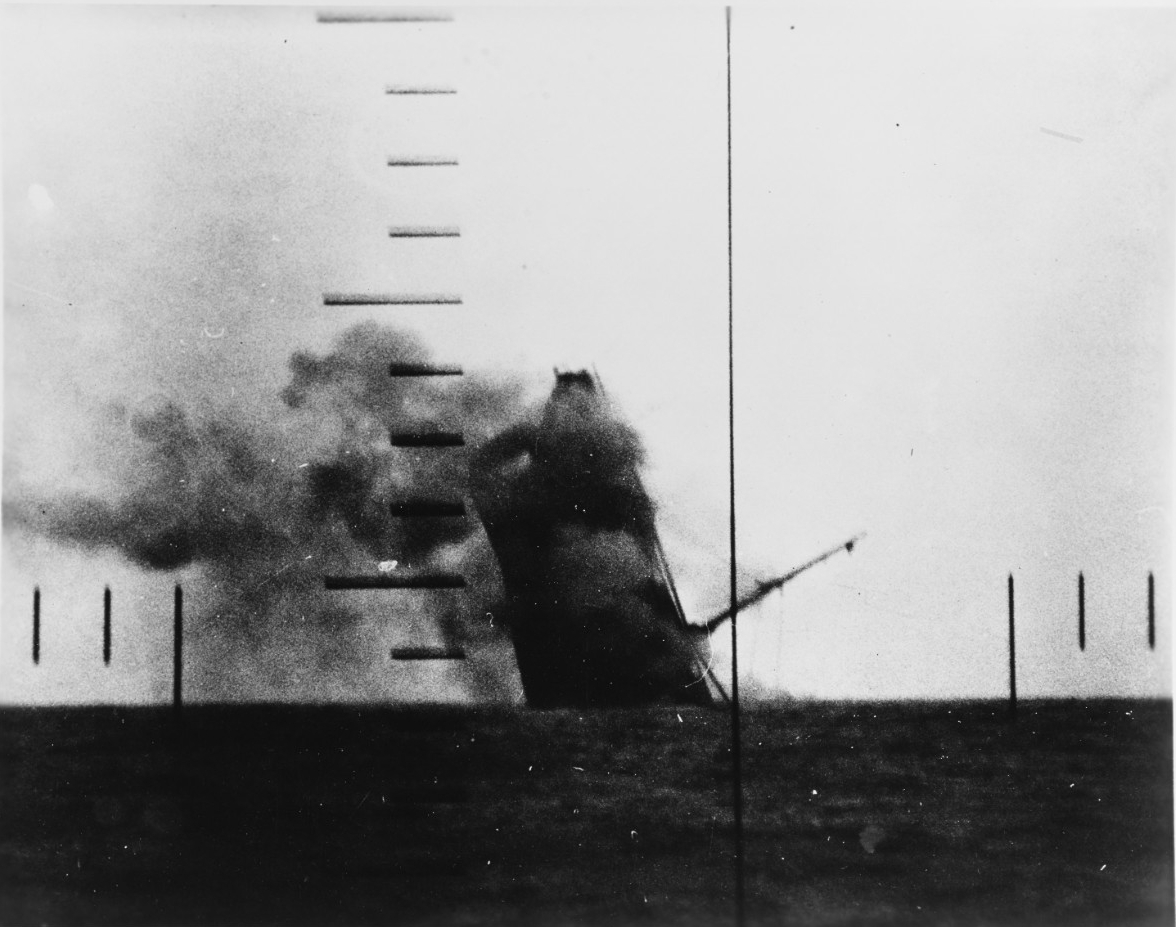 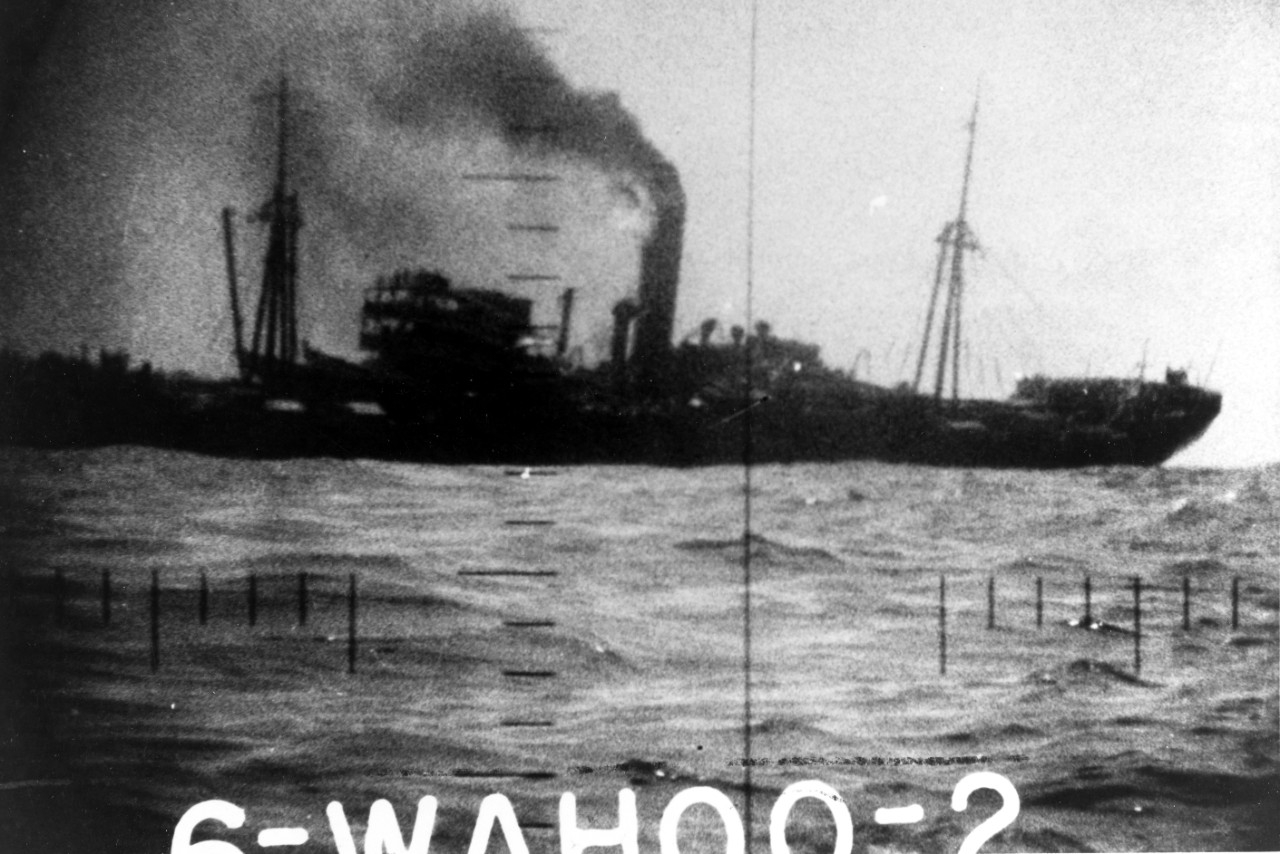