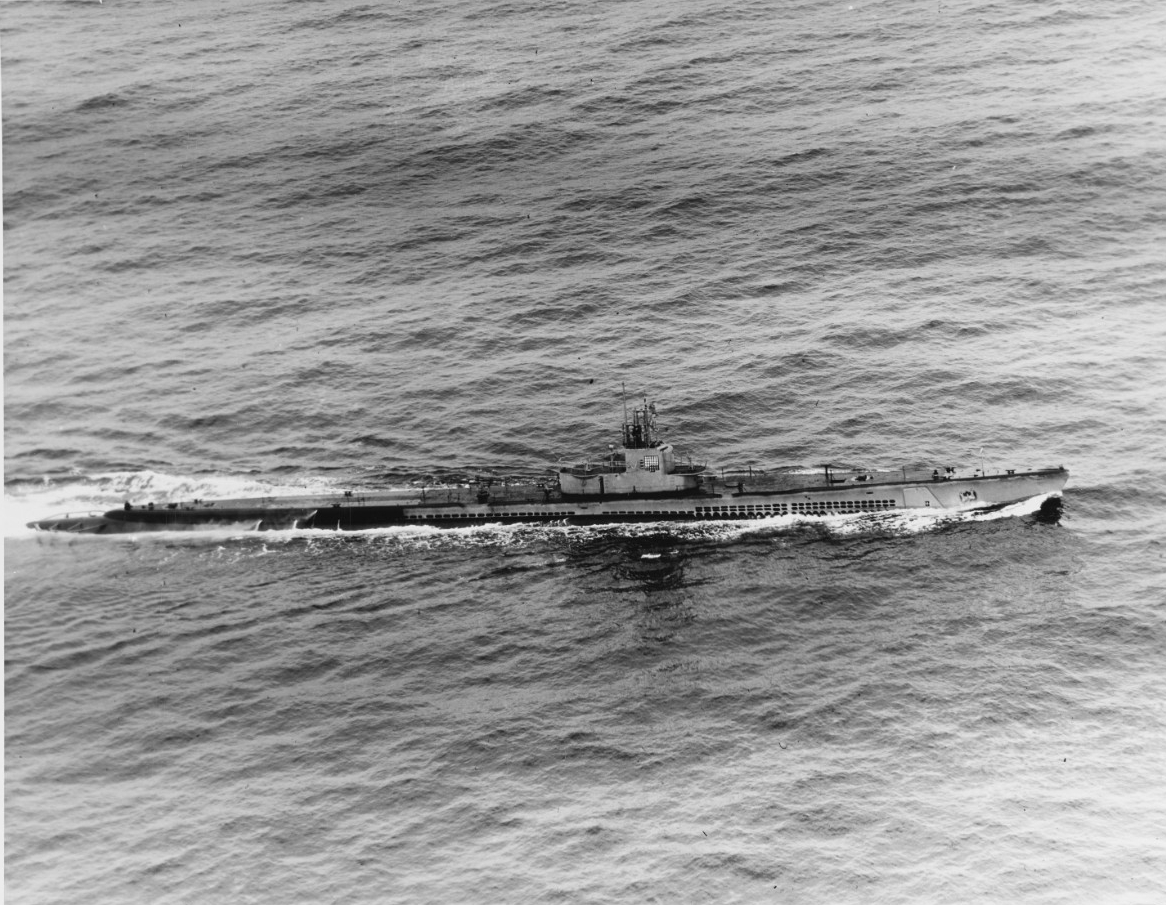 USS Tautog (SS-199) underway, 29 May 1945. Note the scoreboard painted on her conning tower representing Japanese ships sunk by the submarine. Official U.S. Navy photograph now in the collections of the National Archives, 80-G-323879.

USS Tautog (SS-199) was commissioned on 3 July 1940, and after brief training off Long Island, New York, was underway for her shakedown cruise in Caribbean waters. Upon redeployment to New London, Connecticut, in November, Tautog operated off the eastern seaboard until February 1941, and then the submarine was ordered to the Virgin Islands. Late in April of that year, she returned to New London where Tautog loaded supplies and then steamed to Hawaii with two other submarines. After brief stops on the U.S. west coast, the group of submarines arrived at Pearl Harbor on 6 June, where Tautog operated until mid-October. On 21 October, Tautog and USS Thresher (SS-200) secretly launched a simulated war patrol in the area of Midway before returning to Pearl Harbor on 5 December. Two days later on an early Sunday morning, the Japanese attacked Pearl Harbor. Within minutes of the first explosion, Tautog’s gun crew kicked into action splashing a Japanese torpedo plane.

After the United States declared war on the Japanese nation, Tautog steamed on her first war patrol to the Marshall Islands, particularly Kwajalein, where she gathered important information on the enemy. The submarine returned to Pearl Harbor on 4 February 1942, and was subsequently routed to Mare Island, California, for upkeep. On 9 April, Tautog steamed westward for her second war patrol in the Marshall Islands. On 26 April, while enroute to her assigned area of operations, crewmembers spotted an enemy periscope maneuvering to fire on her. Tautog spun around sharply, and then fired a single torpedo that sent Japanese submarine RO-30 to the ocean’s floor.

Shortly after arrival to the Marshall Islands, the submarine was ordered to Truk to intercept enemy ships returning from the Battle of the Coral Sea. On 17 May, Tautog crewmembers spotted Japanese submarine I-28, and then fired two torpedoes that crippled the enemy boat. A third torpedo sent it below the waves. A few days later, Tautog damaged the 5,461-ton cargo ship Sanko Maru, and three days later sank Shoka Maru. Her third war patrol (July–September) was off the coast of Indochina. Although action was limited, Tautog managed to sink Ohio Maru on 6 August. On her next patrol, Tautog opened gunfire on a schooner, turning it into a burning hull and provided another enemy passenger-cargo ship a new home on the floor of the ocean.

Tautog’s fifth war patrol took her to the Java Sea. On Christmas Eve 1942, she spotted a freighter in the Ombai Strait. Early in the morning on Christmas Day, Tautog deployed three torpedoes sending Banshu Maru to a watery grave. After sinking the enemy ship, the submarine intended to head west, but Japanese patrol boats kept her deep for about ten hours before they eventually gave up and withdrew. On 9 January 1943, Tautog sighted a Natori-class cruiser off Ambon at a range of about 3,000 yards. Shortly thereafter, Tautog fired a torpedo, and the crew reported hearing a loud explosion. As Tautog moved in slowly for the kill, the enemy cruiser sent a massive barrage of munitions that made it impossible for her to continue to attack the enemy ship. Tautog spotted an enemy freighter on 22 January in the Banda Sea. She fired three torpedoes sending Hasshu Maru, a former Dutch passenger-cargo ship that had been acquired by the Japanese, under the waves.

Her next patrol was conducted in the Makassar Strait and around Balikpapan. On St. Patrick’s Day 1943, Tautog spotted a grounded tanker that had been damaged topside by an Allied aerial attack. Tautog crept up on the stricken enemy ship and sent a torpedo into the ship’s stern, mortally damaging the ship. For the remainder of the war patrol, Tautog sank destroyer Isonami, the 5,214-ton freighter Penang Maru, a schooner, a sailboat, and a motor sampan. On 11 May, Tautog stood out at Fremantle headed for a new patrol area that encompassed the Flores Sea, the Gulf of Boni, the Molucca Sea, the Celebes Sea, and the Moru Gulf. On 6 June, she scored on a spread of torpedoes fired at a cargo ship later identified as Shinei Maru. A couple of weeks later, Tautog sank the 4,474-ton cargo ship Meiten Maru before heading back to the continental U.S. for overhaul.

After repairs, Tautog departed for patrol duties in waters near the Palau Islands. On 4 November, she sank a submarine chaser and subsequently damaged an enemy tanker and three cargo ships. With all her torpedoes expended, Tautog stalked an enemy convoy for two days while radioing their position back to Pearl Harbor before returning to Midway on 18 November. In mid-December, Tautog steamed to Japanese home waters, southeast of Shikoku Island and along the southern coast of Honshu. On 27 December, the boat fired three torpedoes at a freighter and made a similar attack on a passenger ship, but it was never confirmed she sank the ships due to a barrage of 99 depth charges that were rained down on her. On 3 January 1944, Tautog fired a spread of torpedoes at a cargo ship, but never learned the results of the attack due to explosions obstructing the view of the boat’s periscope and a closing patrol plane. The next day, she fired on Usa Maru breaking the enemy ship in half. About a week later, Tautog fired on two freighters inflicting significant damage.

It was on Tautog’s tenth war patrol when the submarine’s only casualty occurred over the course of the war. On 5 March, while the crew was conducting emergency work on deck, a large wave crashed into the boat knocking all of the crew off their feet and subsequently sweeping one man overboard. After the tragic accident, Tautog was credited with sinking during the patrol freighter Ryua Maru, cargo ship Shojen Maru, destroyer Shirakumo, and passenger-cargo ship Nichiren Maru.

Tautog would conduct another three war patrols over the course of World War II wreaking extreme havoc on the enemy, earning the affectionate nickname, “The Terrible T.” The submarine received 14 battle stars and the Navy Unit Commendation for her war service. According to Joint Army-Navy Assessment Committee figures, Tautog sank 26 Japanese vessels accounting for 72, 606 tons of enemy shipping.

After the war, Tautog served as a reserve training ship for about ten years in Milwaukee, Wisconsin, before her illustrious career ended in 1959. 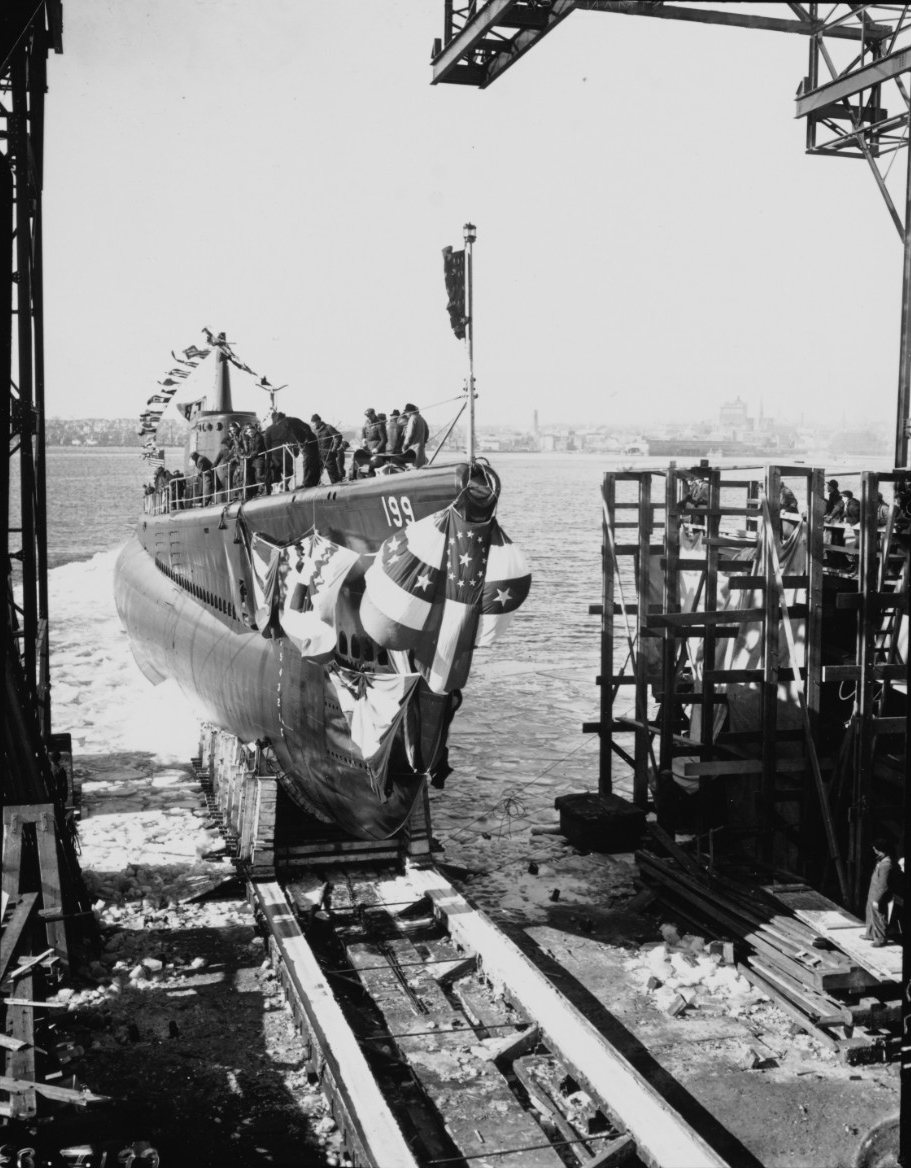 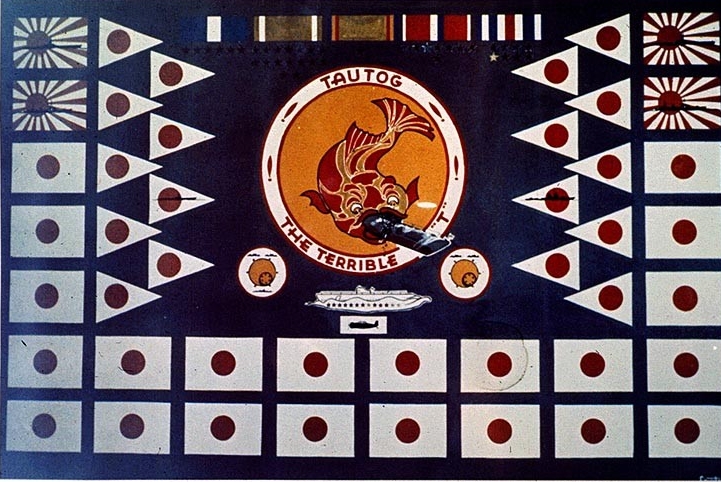 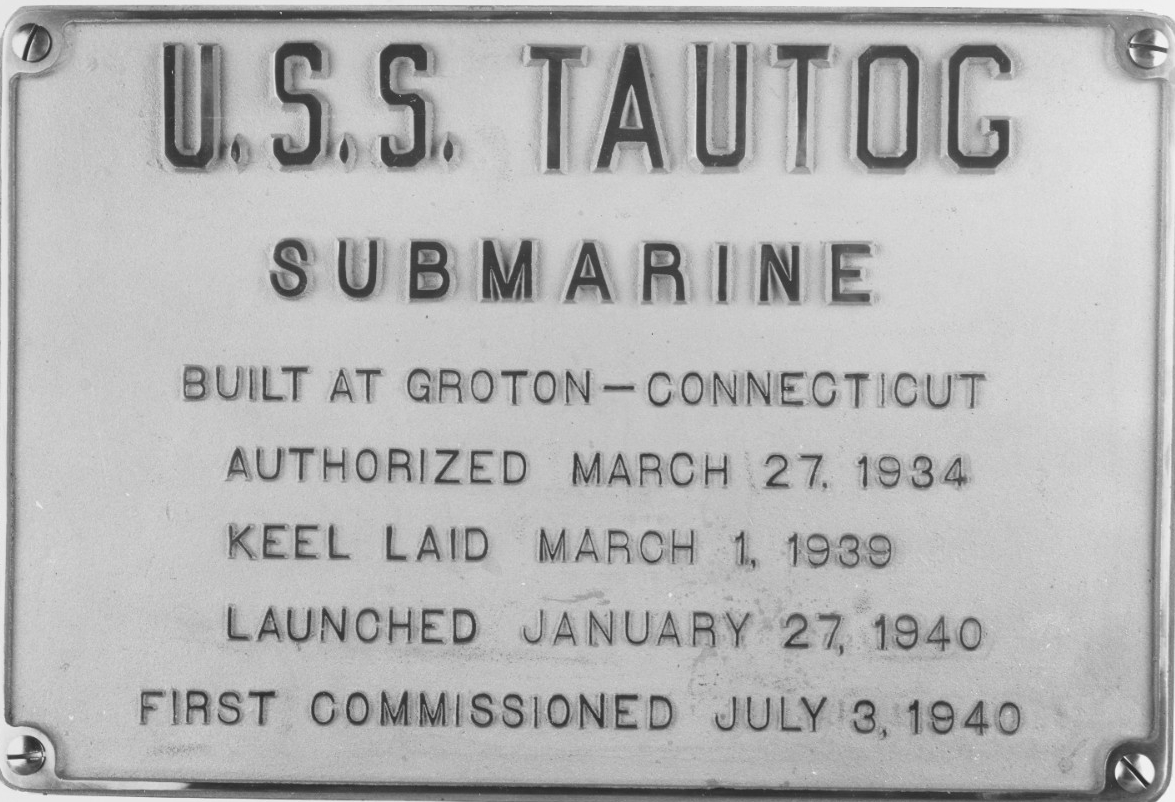 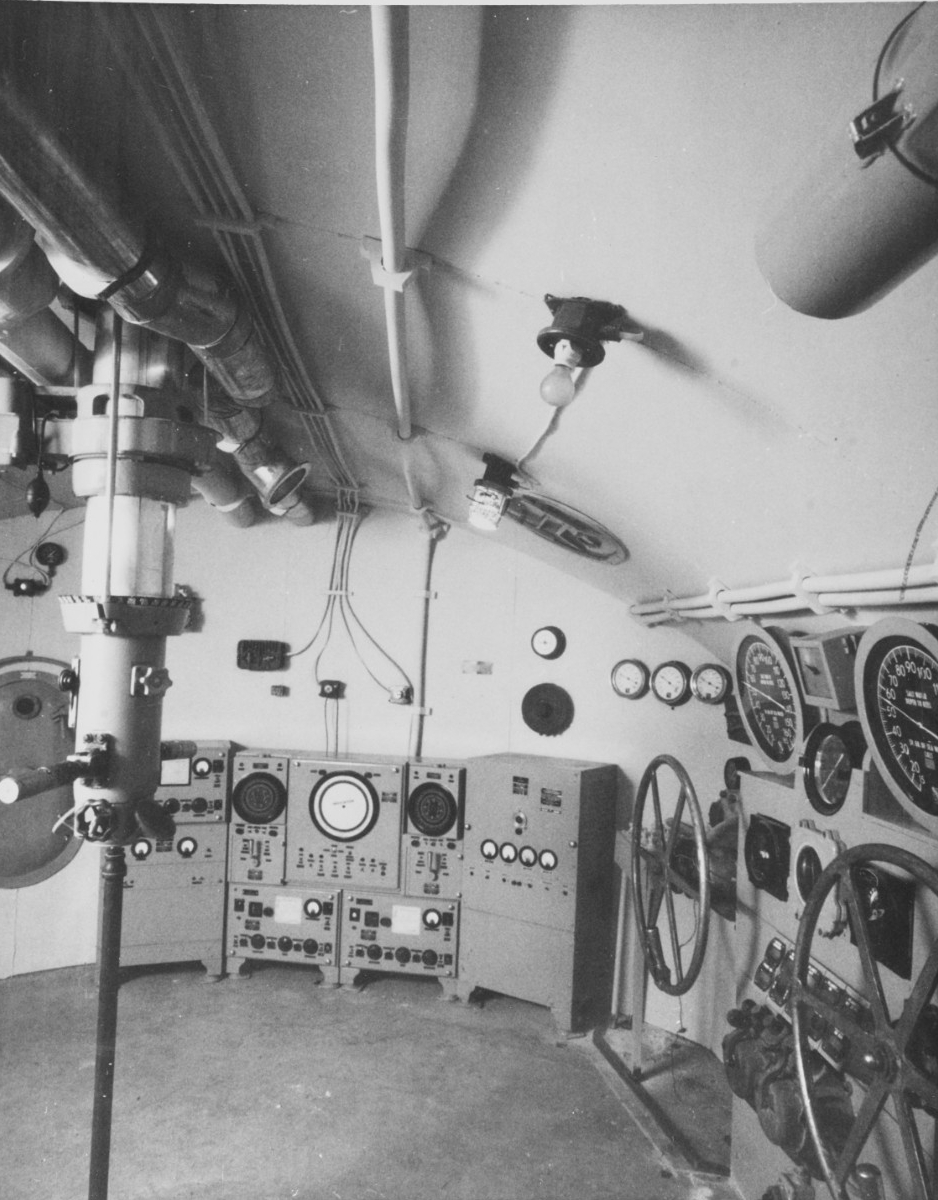