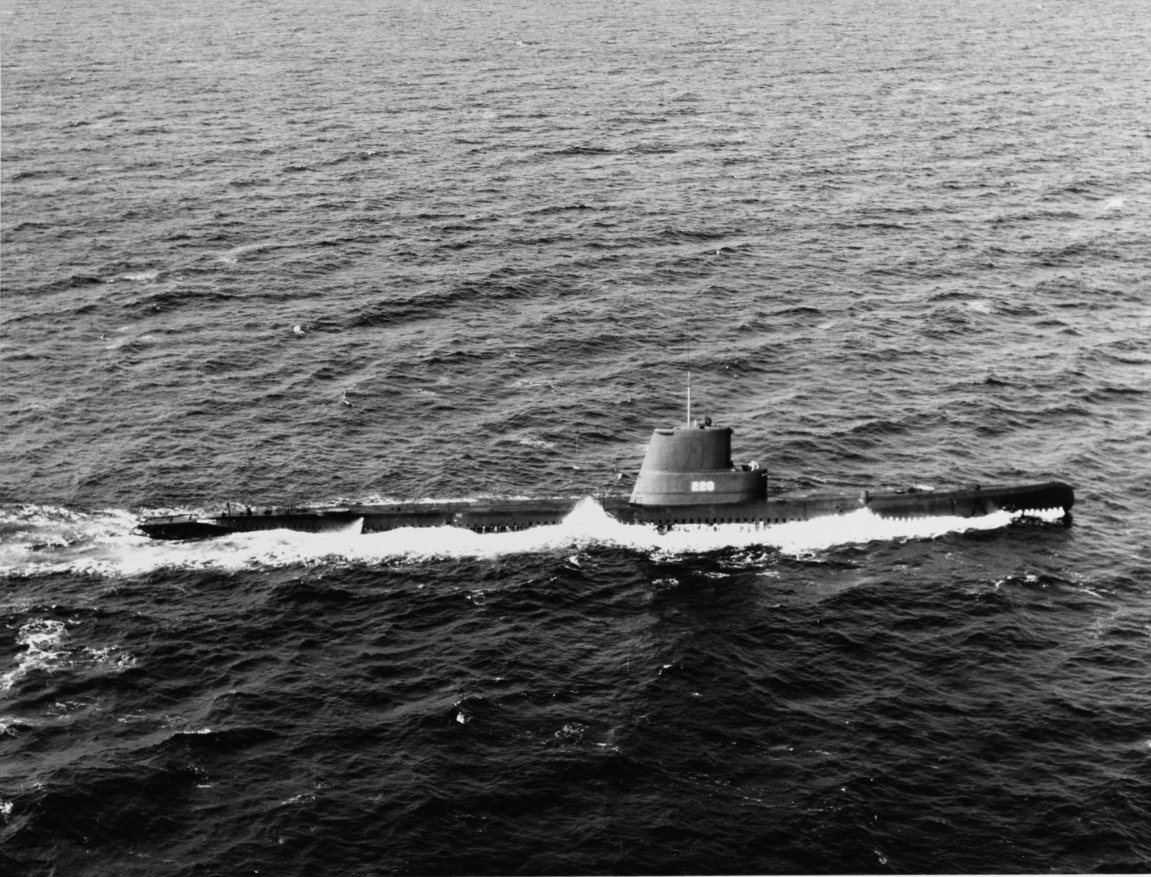 USS Barb (SS-220) underway in November 1954 following modernization and during preparations for transfer to Italy. Official U.S. Navy photograph now in the collections of the National Archives, 80-G-649677.

USS Barb (SS-220) was commissioned on 8 July 1942 at Groton, Connecticut. Following shakedown and participation in Operation Torch—the invasion of North Africa—Barb was ordered in the spring of 1943 to the Pacific Fleet by Chief of Naval Operations Admiral Ernest J. King. After refitting and intensive training, Barb was underway for patrol duty in the fall of 1943 in Pacific waters, but the boat’s first tour of duty in the Pacific was mostly uneventful.

Following overhaul and training, the submarine made way to shipping lanes west of the Marianas and east of Formosa. On 28 March 1944, Barb fired three torpedoes at Fukusei Maru breaking the freighter in half. Later in the patrol, the boat joined USS Steelhead (SS-280) in a successful bombardment of a congested industrial area on Rasa Island in the Philippines. Barb scored a direct hit on the main Japanese installation of a secondary phosphate plant and successfully hit other locations that set off a multitude of munition and chemical explosions.

After refit, Barb was underway, 21 May 1944, with her new skipper, Commander Eugene B. “Lucky” Fluckey. Patrolling the waters along the Kuril Island chain, the north coast of Hokkaido, and in the Sea of Okhotsk, Barb successfully sent five ships and two sampans to the ocean’s floor. On 31 May, the submarine sank Japanese cargo ship Koto Maru and immediately afterwards, fired three more torpedoes at Madras Maru sending that cargo ship below the waves. On 2 June, Barb sent torpedoes at a lone ship, but the aggressive enemy vessel countered with guns and depth charges. Barb escaped, subsequently, into ice fields in the northern Kurils. On 11 June, Barb sank two trawlers with gunfire, then four hours later, sank Japanese ship Toten Maru and freighter Chihaya Maru. Two days later, the boat sank a passenger cargo ship with her last two torpedoes. Barb was credited with sinking an astounding 15,472 tons of enemy shipping during this single war patrol.

In an effort to destroy entire enemy convoys, submarines began to form organized attack groups—known as “wolfpacks” to the German navy. On her ninth patrol, Barb joined USS Queenfish (SS-393) and USS Tunny (SS-282) patrolling in the Manila/Hong Kong sea-lanes. On 31 August, the group joined another group of submarines to converge on a large, heavily escorted convoy. Queenfish led the attack by sinking two enemy ships. Barb fired three torpedoes at other ships scoring hits on a tanker and a freighter. After the initial attack, the submarine continued to stalk the convoy for the next five hours and after dealing with a pesky bird that continued to perch on her periscope, sent three torpedoes into the bowels of Okuni Maru breaking the freighter in two. Barb departed the area to avoid ensuing enemy attacks only to be greeted by non-stop aerial attacks. Barb went deep, but two bombs exploded close enough to the submarine that it ripped off her port antenna and broke several gauges and bulbs. After sinking a sampan with gunfire on 4 September, Barb received an urgent request to join in the search for survivors of a Japanese transport that had been carrying Allied prisoners of war, which had been sunk four days earlier. On the way to the rescue mission, Barb and Queenfish encountered a heavy enemy convoy. Barb’s commander—“Lucky” Fluckey—ordered the deployment of six torpedoes that sank 11,700-ton tanker Azusa and the 20,000-ton escort carrier Unyo. Once Barb reached the area in the open ocean to rescue survivors, the crew saved 14 British and Australian prisoners from several small wooden rafts.

The submarine began her tenth war patrol with an attack group in the East China Sea. On 10 November, Barb fired a spread of torpedoes at a lone transport sending Gokoku Maru to the depths of the ocean. Two days later, Barb fired two torpedoes that sank cargo ship Naruo Maru, and two days after that sank two Japanese schooners.

Her 11th war patrol began on the Formosa Strait and the Chinese coast. On 1 January 1945, Barb sank a small Japanese boat with gunfire, and a week later sent Shinyo Maru, Sanyo Maru and Anyo Maru below the waves. On 23 January, the attack group encountered a convoy of 30 enemy ships. Barb deployed a barrage of torpedoes that scored eight hits sinking three ships and seriously damaging three others. For their actions during the brazen attack, Barb received a Presidential Unit Citation. Fluckey received the Medal of Honor “for conspicuous gallantry and intrepidity at the risk of his life above and beyond the call of duty…”

After a major overhaul, Barb was underway for her 12th war patrol in June 1945. Except for three days of lifeguard duty, this offensive war patrol was conducted north of Hokkaido and east of Karafuto. As soon as Barb reached the area, she immediately sank two luggers at close range with gunfire. After the attacks, Barb turned her attention to the shores of Japan. During the early morning hours of 22 June, Barb positioned herself about three miles from the center of the town of Shari. Barb made history as the first submarine to employ rockets successfully against Japanese shore installations. A few weeks later, Barb launched attacks against two other shore towns.

On 19 July, Fluckey noticed a railroad running close to the Japanese coastline. After three days of observation to establish train schedules, eight crewmembers secretly deployed ashore in the black of night. The men strategically placed a 55-pound demolition charge that was intended to explode when the next train passed. As the crew departed the area in rubber boats, an incoming train hit the charge sending locomotive wreckage 200-feet in the air that crashed in a mass of flames and smoke. Twelve freight cars, two passenger cars, and one mail car derailed and piled up in a mound of twisted metal. For the remainder of the war patrol, Barb continued to wreak havoc on Japanese shores and enemy vessels. Her last war patrol ended when Barb arrived at Midway on 2 August 1945. The war ended when the Japanese surrendered about two weeks later. 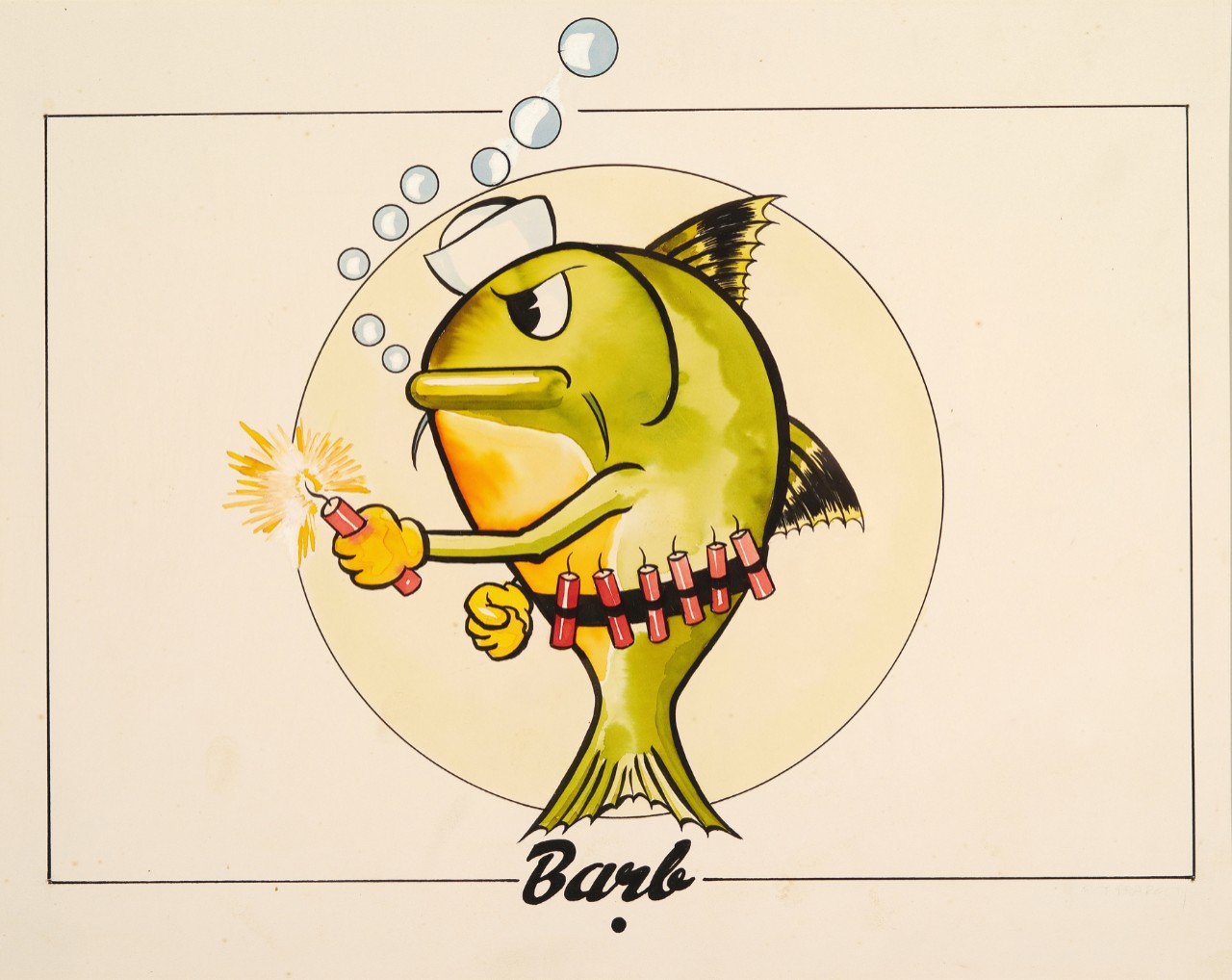 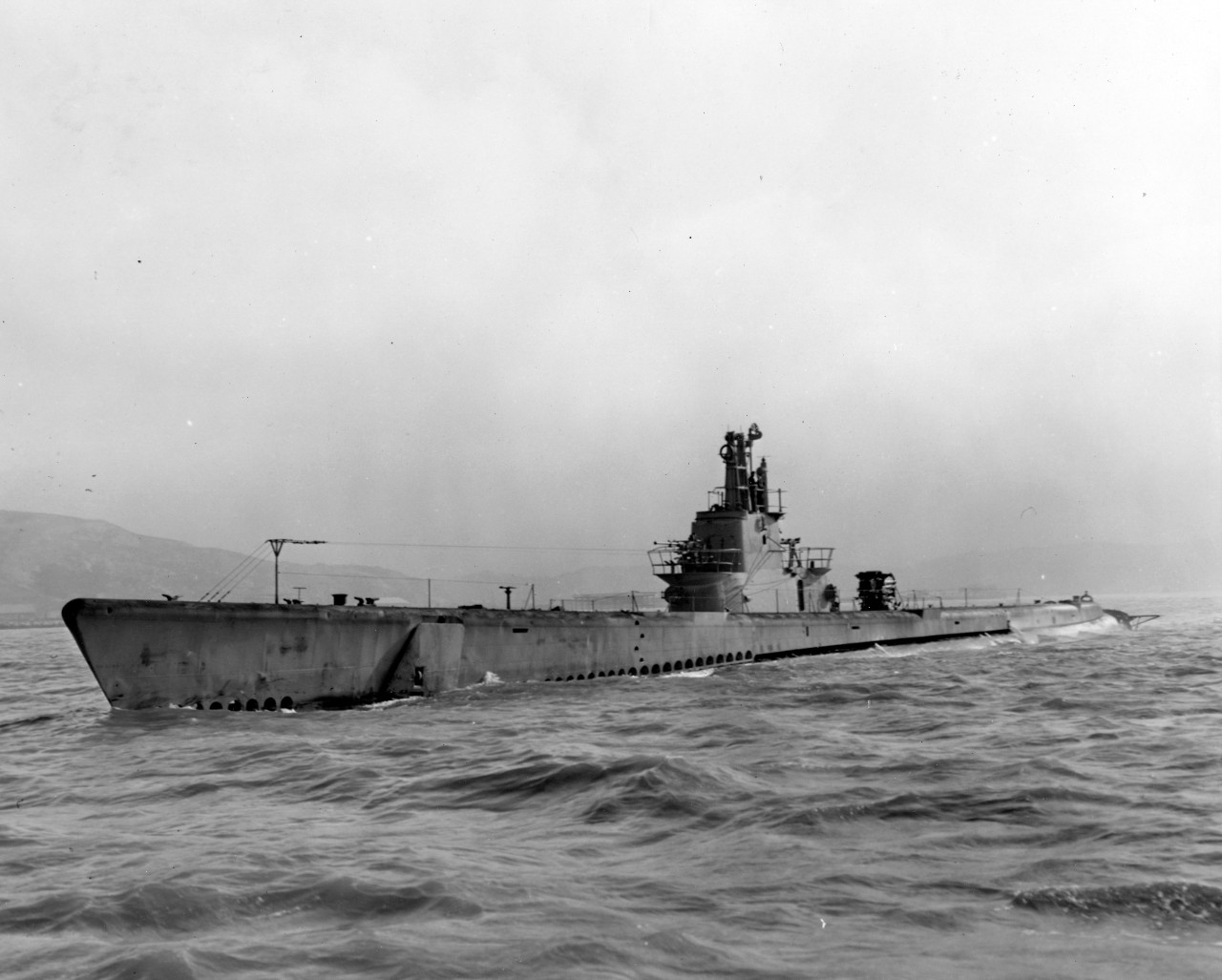 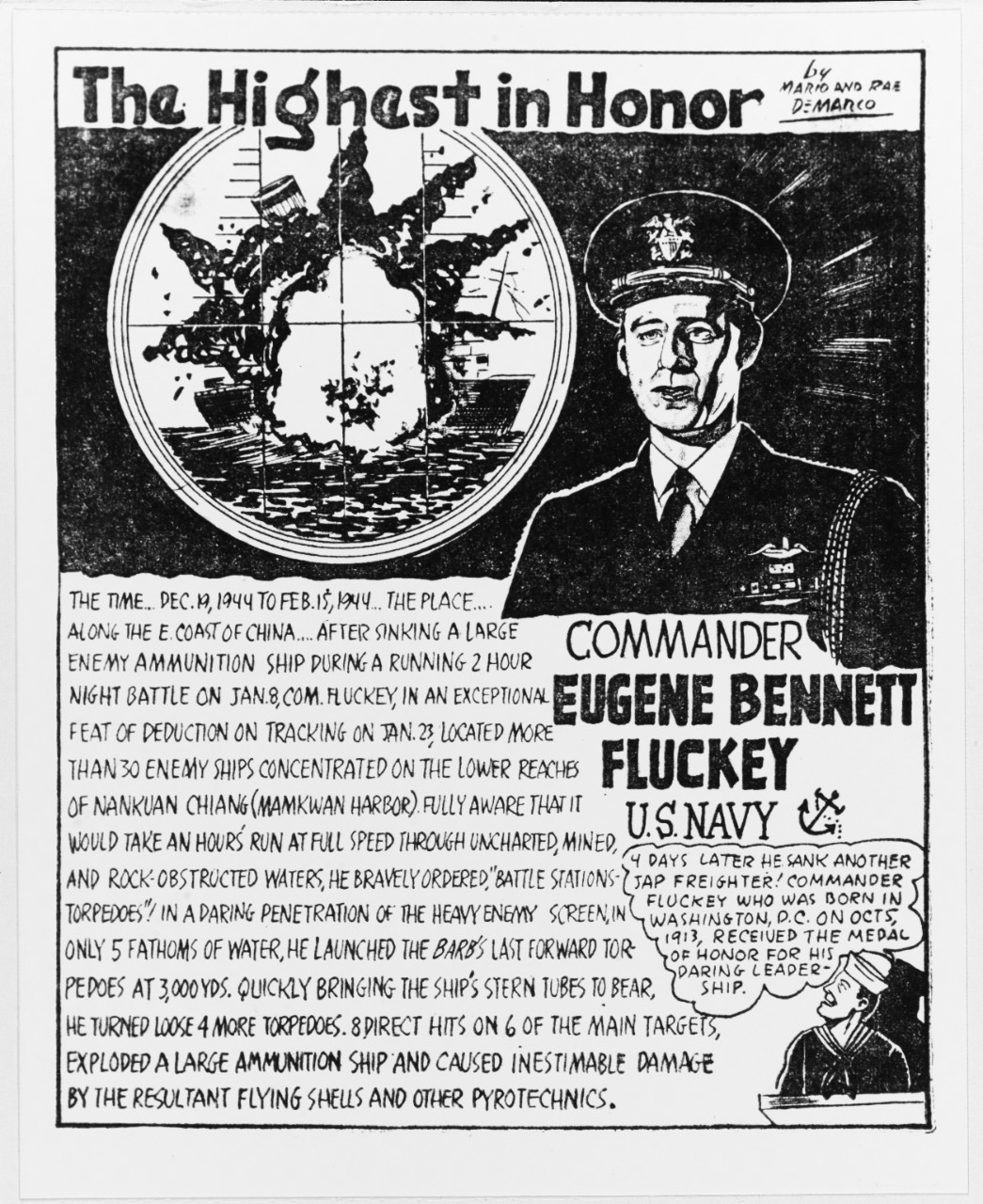 Vignette by Mario DeMarco for the Navy Times, detailing how Commander Eugene B. Fluckey received the Medal of Honor as commanding officer of USS Barb, 1944–1945. Naval History and Heritage Command photograph, NH 88019. 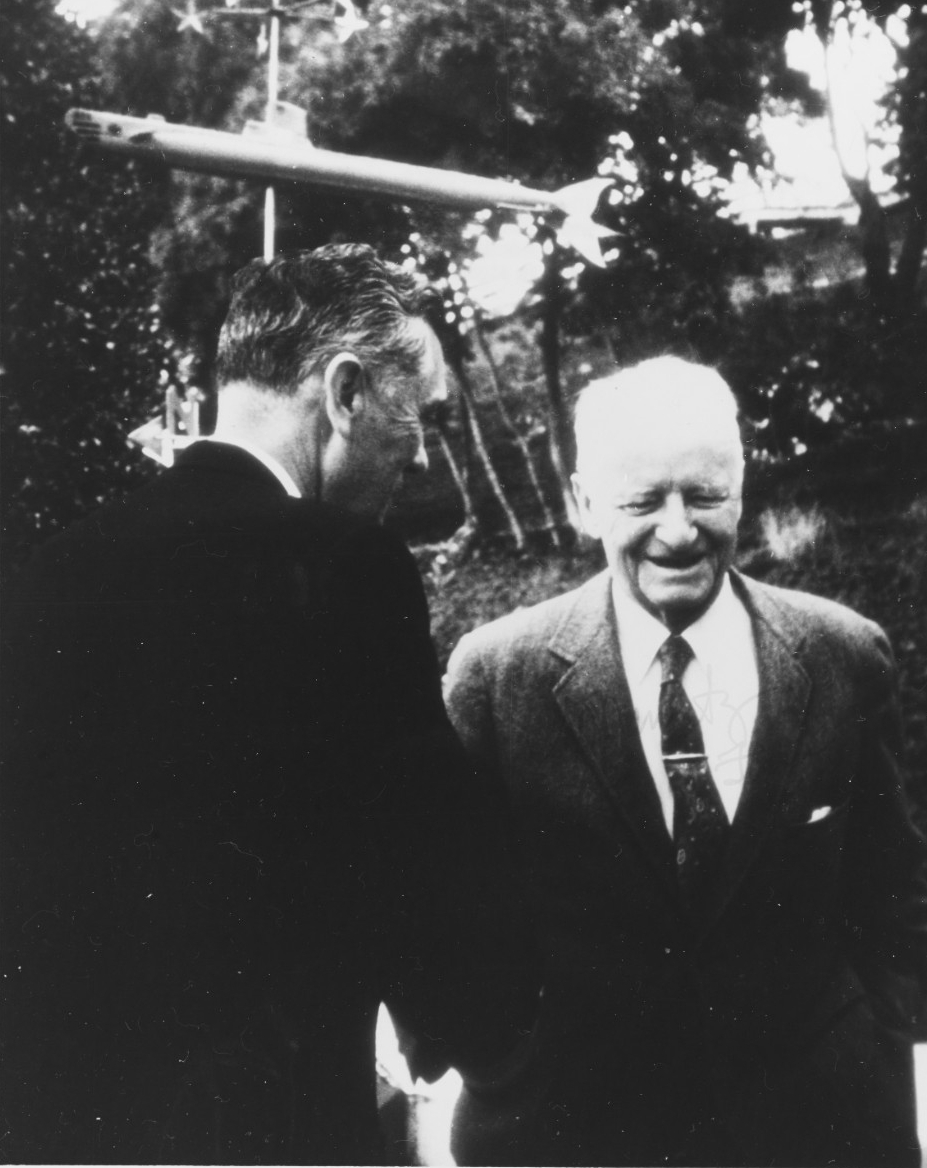 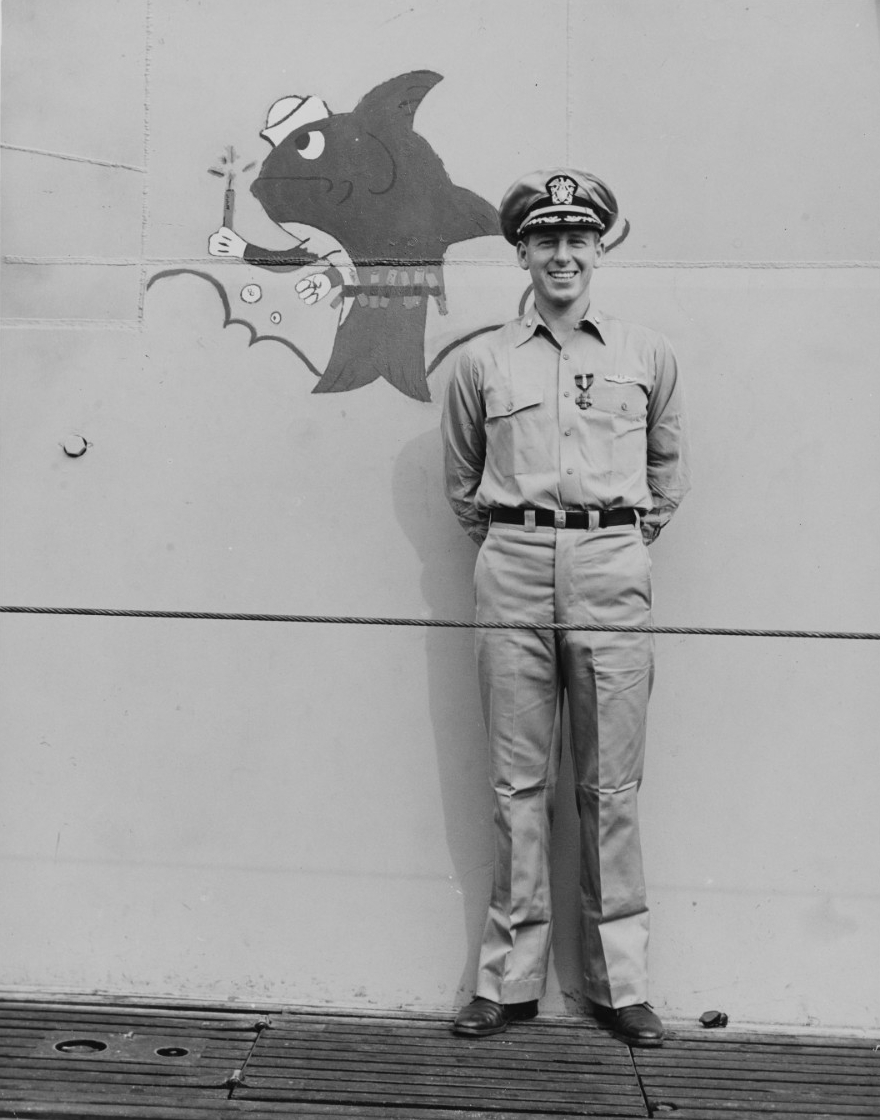 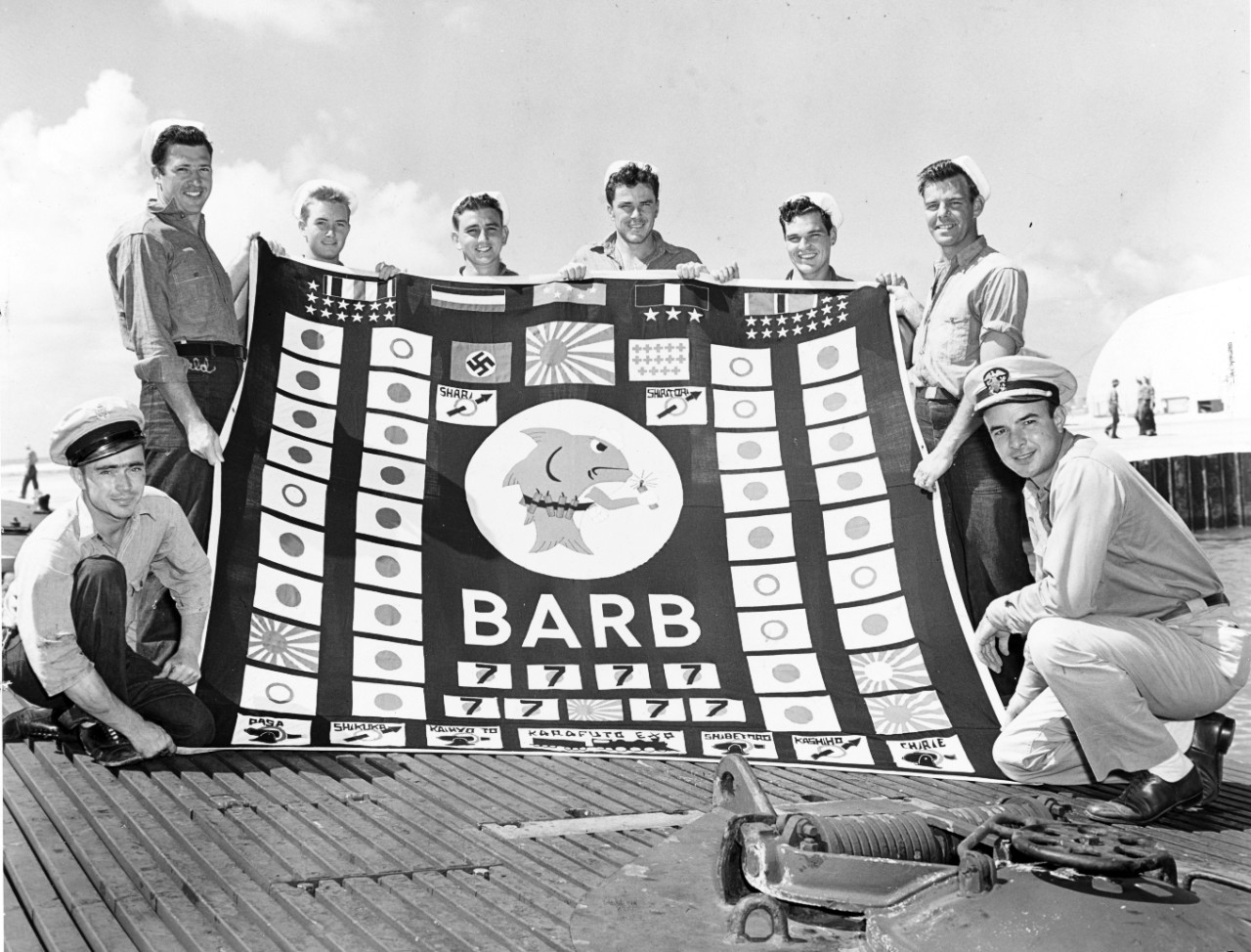 Members of USS Barb’s (SS-220) demolition squad pose with her battle flag at the conclusion of her 12th war patrol. Taken at Pearl Harbor, Hawaii, August 1945. During the night of 22–23 July 1945, these men went ashore at Karafuto, Japan, and planted an explosive charge that subsequently wrecked a train. The raid is represented by the train symbol in the middle bottom of the battle flag. Official U.S. Navy photograph from the collections of the Naval History and Heritage Command, NH 103570. 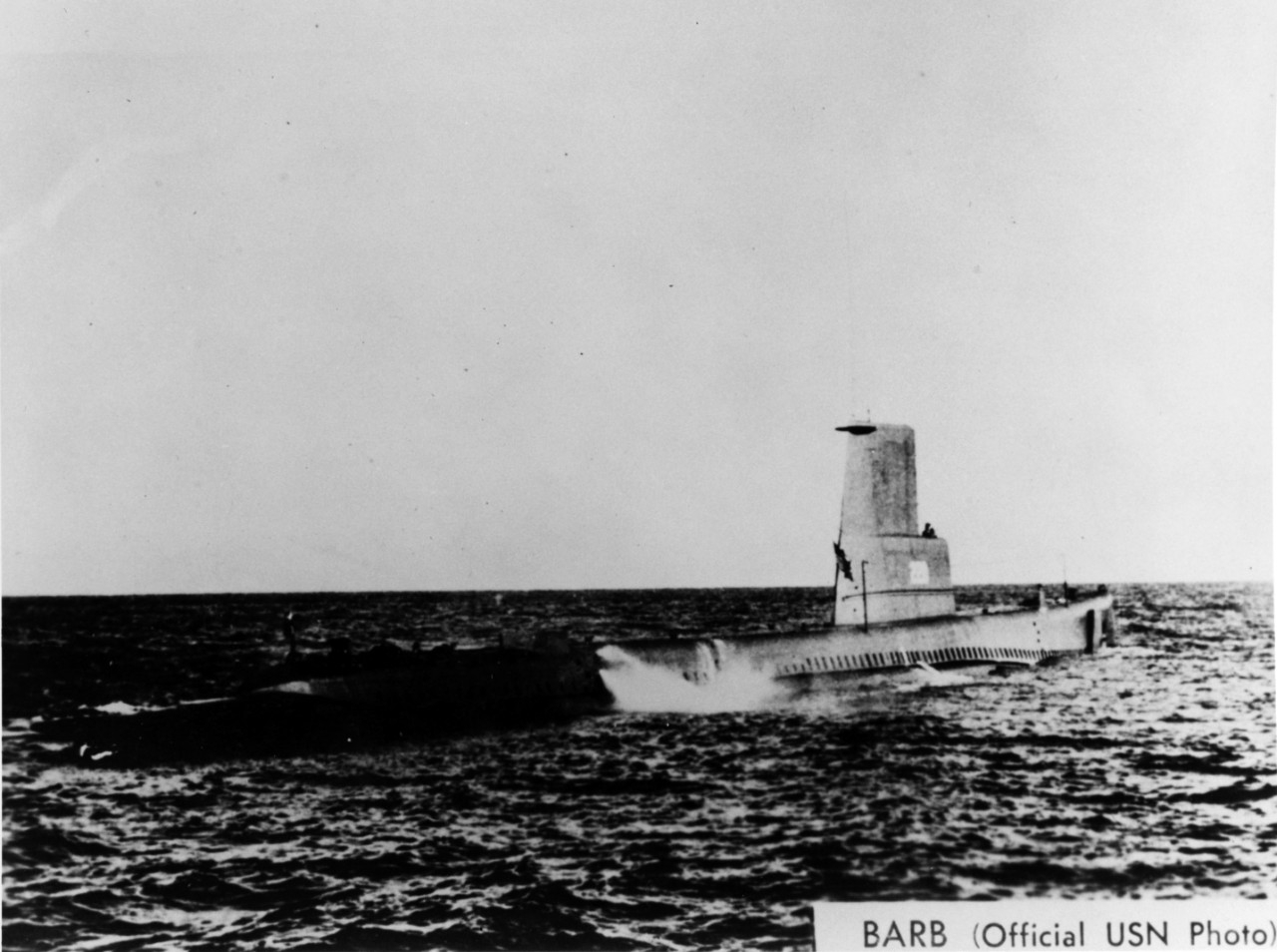 USS Barb (SS-220) photographed circa 1954, after she was modernized for transfer to Italy. Courtesy of Donald M. McPherson, 1974. U.S. Naval History and Heritage Command photograph, NH 79758. 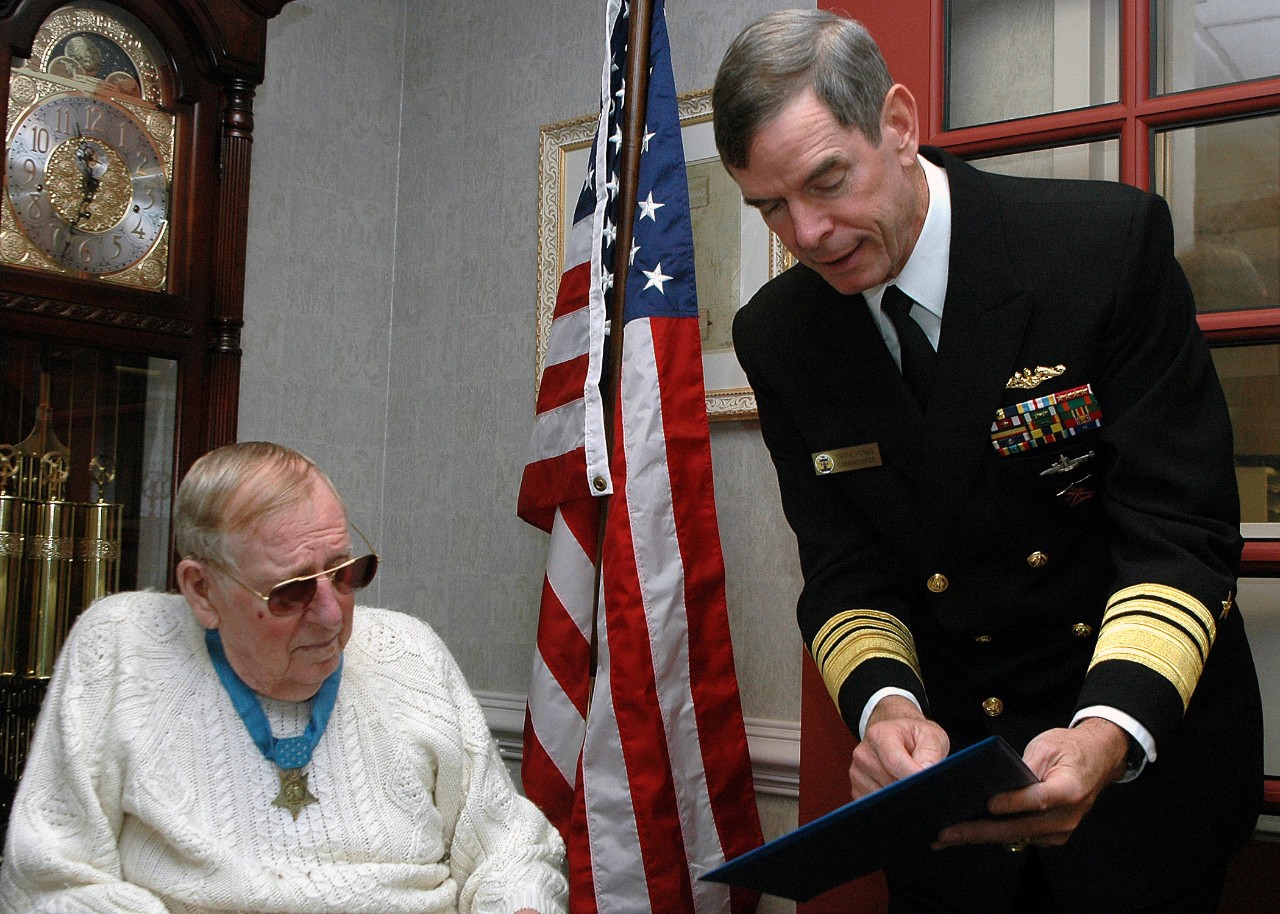