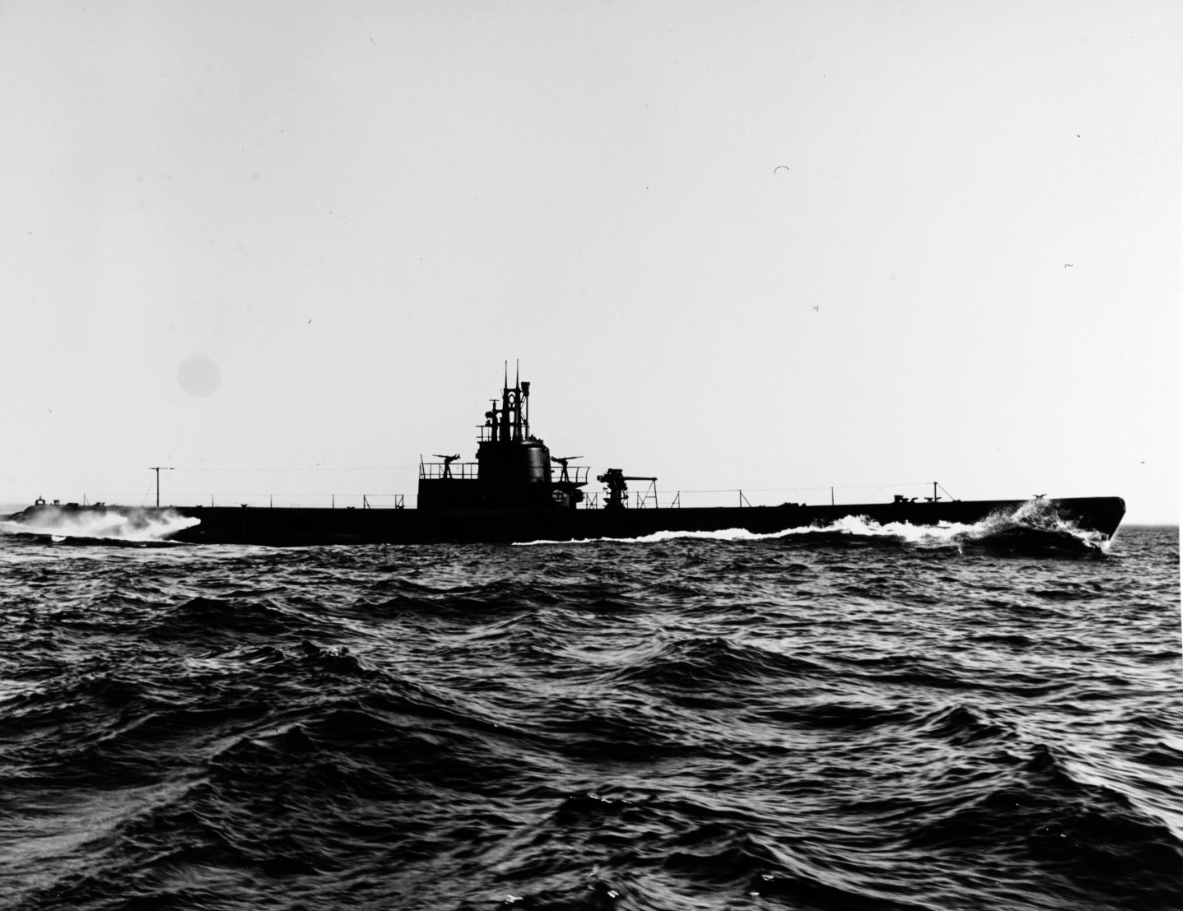 Gato-class submarine USS Rasher (SS-269) was commissioned on 8 June 1943, and after trials in Lake Michigan, was decommissioned and then towed down the Mississippi River to New Orleans for recommissioning and fitting. The new submarine conducted training in the Bay of Panama before she steamed to Brisbane, Australia, arriving on 11 September. About two weeks later, Rasher was on the move for her first war patrol operating in the Makassar Strait-Celebes Sea area. On 9 October, Rasher sank passenger-cargo ship Kogane Maru in a submerged attack, and four days later, spotted an enemy convoy escorted by two destroyers and a scout plane. Rasher fired two salvos of three torpedoes each and then crashed dived to avoid the subsequent enemy attack. Freighter Kenkoku Maru broke to pieces and sank. The rest of the convoy struck back at Rasher, but their efforts were fruitless. On 31 October, while patrolling off the Borneo coast, Rasher stalked tanker Koryo Maru, but due to pesky aerial patrols was unable to surface and attack. Once nightfall hit, Rasher surfaced and sent the tanker it to its final resting place on the bottom of the ocean. On 8 November, Rasher sank tanker Tango Maru with a spread of torpedoes, and then attacked a second convoy around midnight, but enemy countermeasures prevented damage assessment. With all her torpedoes expended, Rasher headed home arriving at Fremantle in late November.

After refit, Rasher commenced on her second war patrol in the South China Sea, off Borneo. On 4 January 1944, during an attack on a three tanker enemy convoy, Rasher was chasing Hakko Maru when the tanker suddenly exploded from a torpedo strike from another U.S. submarine in the area, USS Bluefish (SS-222). Rasher dealt a second blow to the stricken ship by sending torpedoes into the tanker’s hull. Early the next morning, Rasher fired a spread of four torpedoes at tanker Kiyo Maru. After two of the torpedoes scored hits, a mushroom of fire arose leaving only an oil slick and scattered debris. Later in the patrol, Rasher planted mines off Saigon Harbor. Prematurely exploding torpedoes and vigilant enemy escorts plagued the remainder of the patrol. Rasher’s third patrol began in late February in the Java-Celebes Sea area. On 25 February, the boat attacked a Japanese convoy off Bali, sending cargo ships Tango Maru and Ryusei Maru below the waves. About a week later, she destroyed cargo ship Nattai Maru, and while transitioning back to her home base, sent 2,750-ton freighter Nichinan Maru to a watery grave. On her fourth war patrol in the Makassar Strait-Celebes Sea area, Rasher sent freighter Choi Maru, converted gunboat Anshu Maru, tanker Shioya Maru, and cargo ship Koan Maru to Davy Jones Locker.

Rasher’s fifth war patrol in the South China Sea was spent mostly with Bluefish. After stalking a three-ship convoy, Rasher deployed a spread of five torpedoes at the largest ship sending Shiroganesan Maru to its new home on the ocean’s floor. On 18 August, Rasher’s radar detected a large convoy protected by air assets and destroyers. Her first target was tanker Teiyo Maru that was filled with gasoline. Rasher attacked the highly flammable vessel sending explosions 1,000 feet in the air with parts of it blown some 500 yards from the flaming wreck. The attack caused widespread panic among the Japanese sailors. The enemy escorts fired their weapons wildly at unknown targets, and they laid depth charges randomly that were nowhere in the vicinity of the American submarines. Rasher fired another spread of torpedoes that sank cargo-transport Eishin Maru and damaged a second vessel. Rasher continued with the hunt destroying transport Teia Maru and carrier Taiyo. Bluefish and USS Spadefish (SS-411) finished off the remainder of the ships in the convoy. With all torpedoes expended, Rasher steamed to the U.S. west coast for overhaul. For the remainder of the war, Rasher patrolled in the East China Sea and off Honshu, but saw little action. Rasher was decommissioned on 22 June 1946, and placed in the Atlantic Reserve Fleet at New London, Connecticut.

From December 1951 through July 1953, Rasher underwent extensive hull and interior alterations at the Philadelphia Navy Yard for her new role as radar picket submarine SSR-269. In November 1953, Rasher made way to San Diego via Guantanamo Bay and the Panama Canal, where she served at the southern California port for the next two years participating in a number of fleet exercises. In December 1959, Rasher deployed to the Far East where she operated with 7th Fleet. In May 1960, she took part in the Black Ship Festival at Shimoda, Japan, commemorating Commodore Matthew C. Perry's landing. She returned to San Diego in June 1960. The next month Rasher was reclassified as an auxiliary submarine, AGSS-269, participating in a number of western Pacific exercises.

After completing another overhaul, Rasher deployed in support of Seventh Fleet operations off Vietnam. From 3 January to 17 July 1966, Rasher deployed to conduct amphibious and anti-submarine warfare training in support of Republic of Korea, Nationalist Chinese, and Thai units, as well as operations with 7th Fleet off Vietnam. After her second deployment in support of the Vietnam War, Rasher operated off the coast of California before she was decommissioned in May 1967. Rasher served as a training submarine for a few years before she was stricken from the Navy’s list on 20 December 1971. 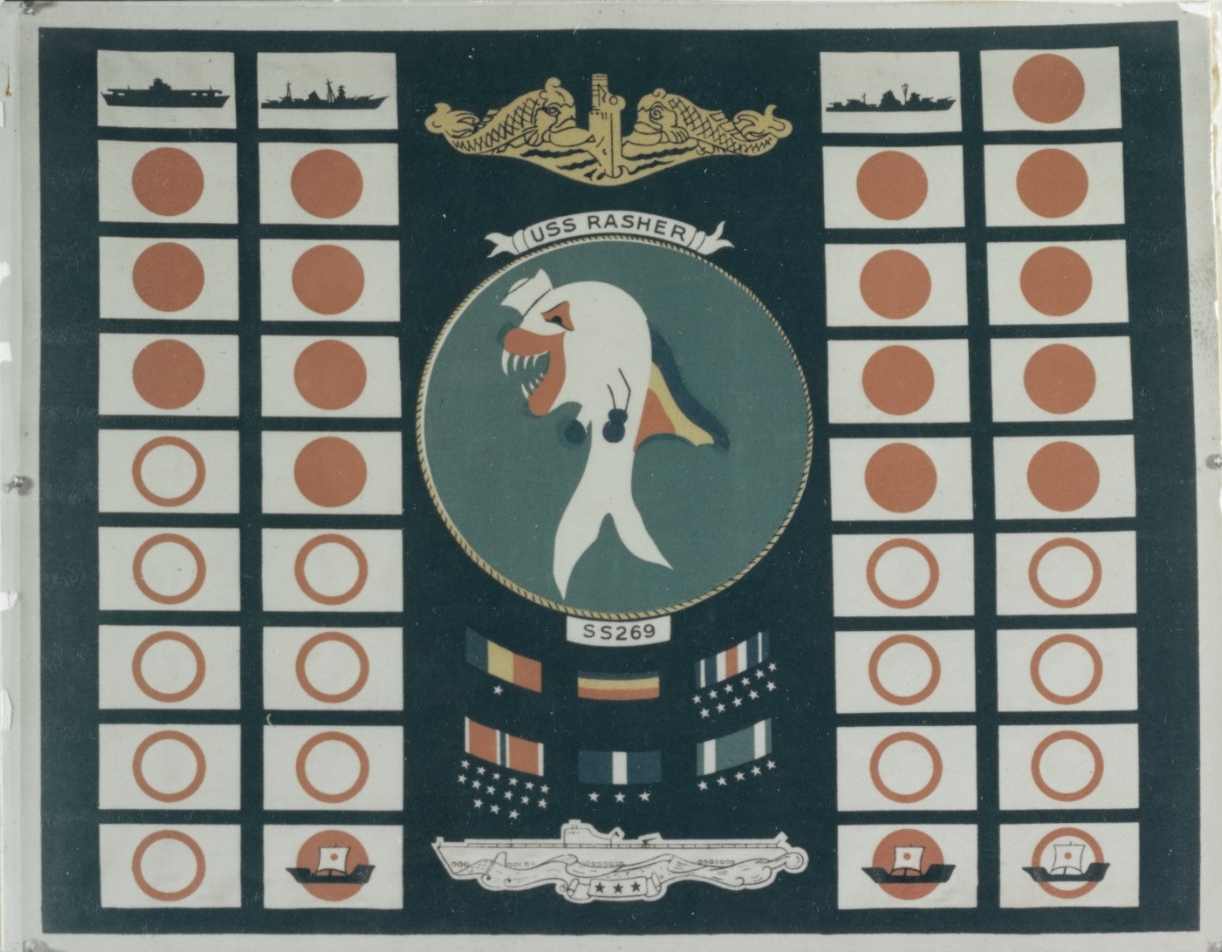 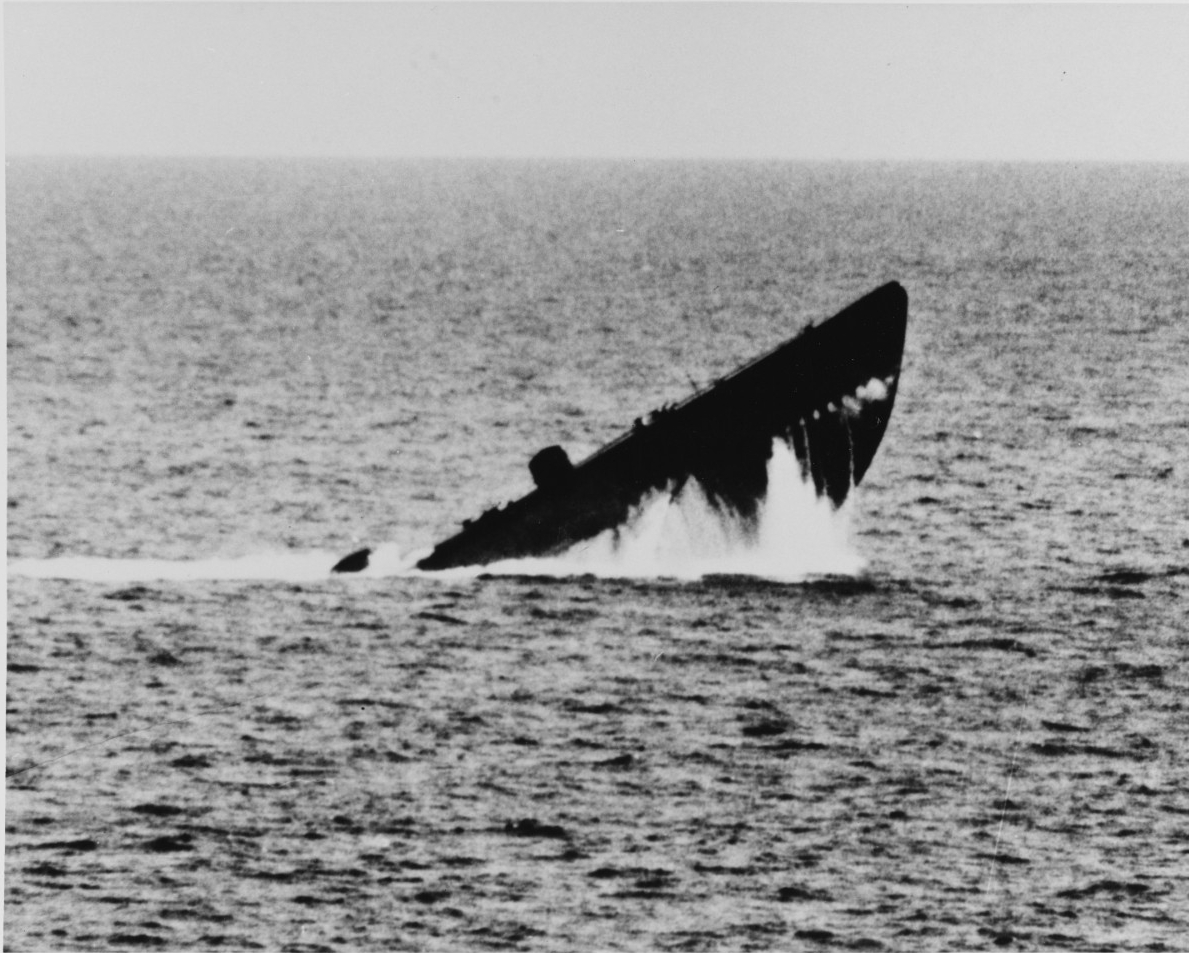 USS Rasher (SSR-269) surfaces during anti-submarine exercises in the Pacific, 1958. The use of submarines in such exercises lends realistic effect to the training. National Archives photograph, USN 1038109. 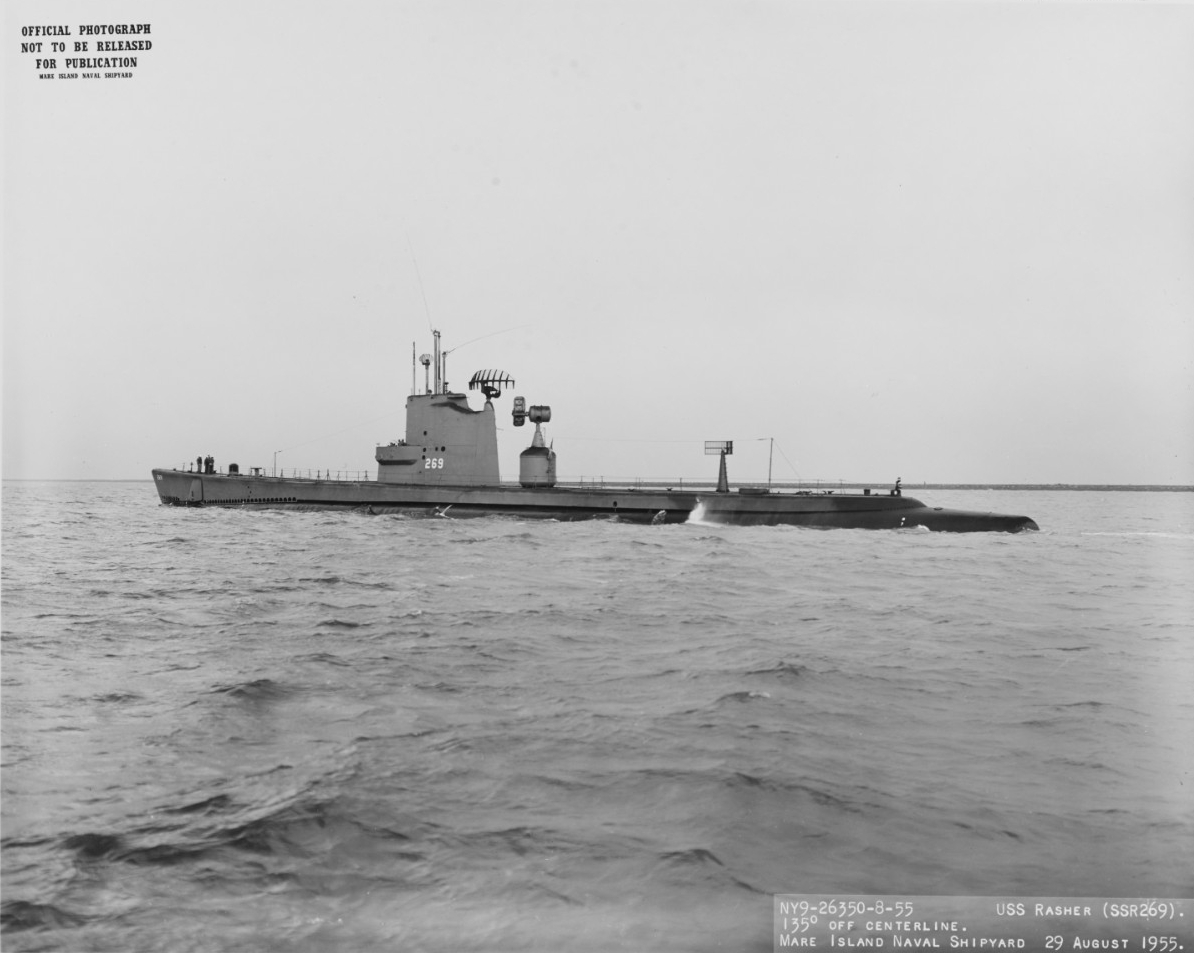 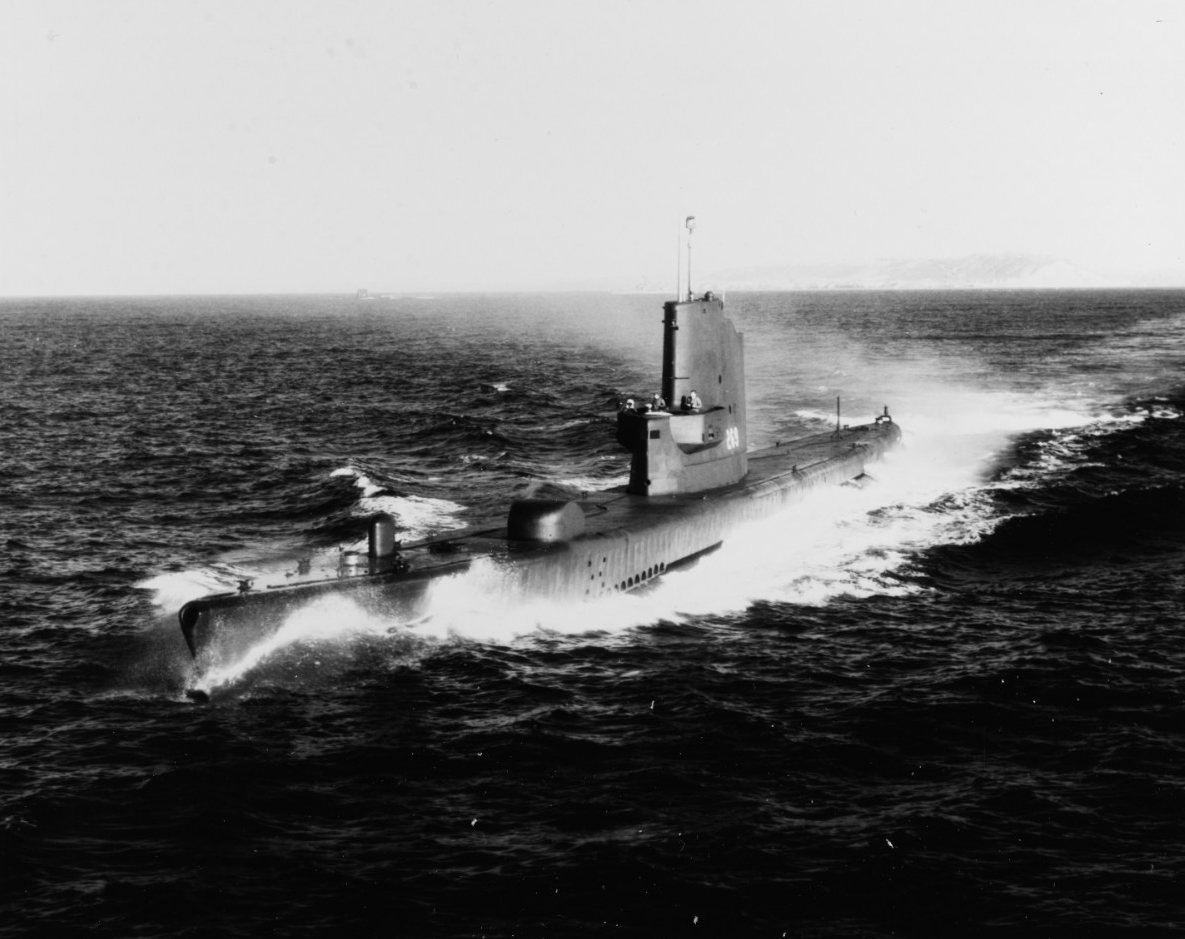