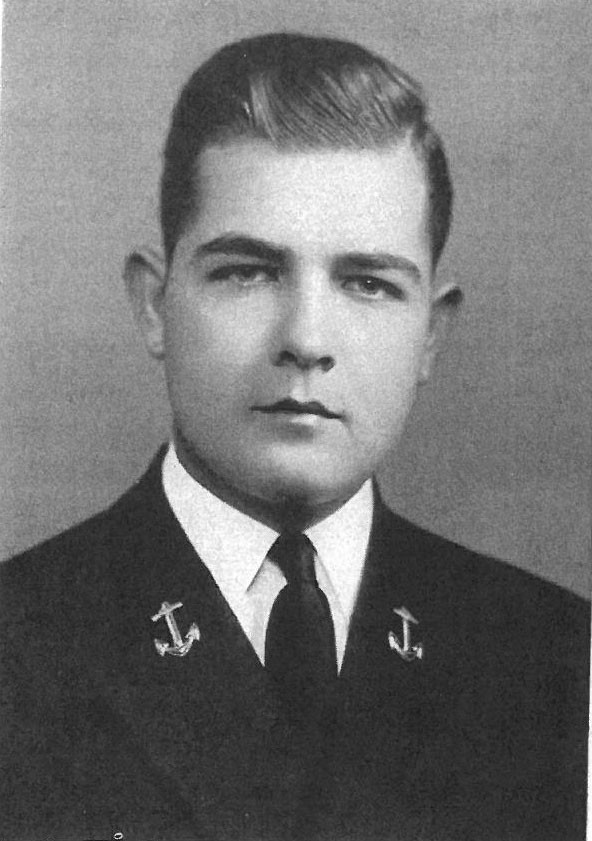 Mat Murry Cain was born in Teague, Texas, on February 25, 1918, son of Mat Murry Cain, Sr., and the late Mrs. Mae Lillian Maupin Cain. He attended Allen Academy in Bryan, Texas, and on June 26,1936, entered the US naval Academy, Annapolis, Maryland, on appointment from Texas. He was graduated with the degree of Bachelor of Science and commissioned Ensign in the US Navy on June 6, 1940, and through subsequent advancement attained the rank of Commander to date from January 1, 1951.

Upon graduation he was assigned to USS Nevada, and from July 1940 until September 1941 served on board that battleship, his duties in gunnery, communications and as Assistant Navigator. In October 1941 he joined USS Hornet, and was serving as Signal Officer of that aircraft carrier at the outbreak of World War II in December of that year. He was detached in March 1942 for instruction in submarines at the Submarine School, New London, Connecticut, and in June of that year reported to USS S-20 for duty. In that submarine he served as Engineering and Communications Officer, Gunnery and Torpedo Officer and finally as Executive Officer during the period ending in October 1943.

Assigned that month to USS 0-3, he served in that submarine until January 1945, first as Executive Officer, later in command. In April he reported to USS Rasher, and served throughout the remaining months of the war, and until December of the year, as Executive Officer and Navigator of the USS Rasher (SS-269). In that submarine he participated in the assault and occupation of Okinawa Gunto, in the Pacific Area. He returned to the United States, and when detached from the Rasher was ordered to the Naval Postgraduate School, Annapolis. Where he was a student in Aeronautical Engineering from January 1946 until June 1947.

Duty as Assistant Aeronautical Engineer at the Naval Air Station, Quonset Point, Rhode Island, was followed by his assignment in March 1949 to USS Kearsarge(CVA-33), in which he served as Aerological Officer until December of that year. In February 1950 he reported to the US Fleet Weather Central, Manila, Philippine Islands, for duty as Officer in Charge. He served in that capacity for sixteen months, then returned to the United States to serve from October 1951 to January 1953 as Security Officer at the Naval Ordnance Test Station, Inyokern, California, and for two months thereafter as Officer in Charge of the Pasadena Annex, NOTS, Inyokern.

On August 28, 1953, Commander Cain assumed command of USS Cushing (DD-797) at Norfolk, Virginia. His ship, after conducting gunnery, engineering, damage control and seamanship drills off the Virginia Capes, participated in anti-submarine exercises as part of Hunter-Killer Group Four, with USS Gilbert Islands and Destroyer Division 282, off the northeast coast of the United States. She left the Continental United States with her Division on January 5, 1954, for a Mediterranean cruise, and, again joining the carrier escort vessel, Gilbert Islands, operated with a Hunter-Killer Group from January 25 to 29. With Division 262 she visited Athens, Greece; Naples, Italy; and Cannes, France, before the return to Norfolk, Virginia, her home port, via the Straits of Gibraltar, on March 11, 1954. She subsequently served as a training ship for Naval Reserves Personnel. Commander Cain was detached from command of the Cushing late in August 1954.

From September 1954 until February 1956 he was Assistant Officer in Charge of the Fleet Weather Central, Norfolk, Virginia, and in April 1956, he again went to sea, this time as Operations Officer of USS Columbus (CA-74). In August 1957 he became Executive Officer and served in that capacity until detached in November of that year. In December he assumed command of USS Kermit Roosevelt (ARG-16), and on September 22, 1959, was ordered detached from that command and to duty in the Office of the Chief of naval Operations, Navy Department, Washington, DC.