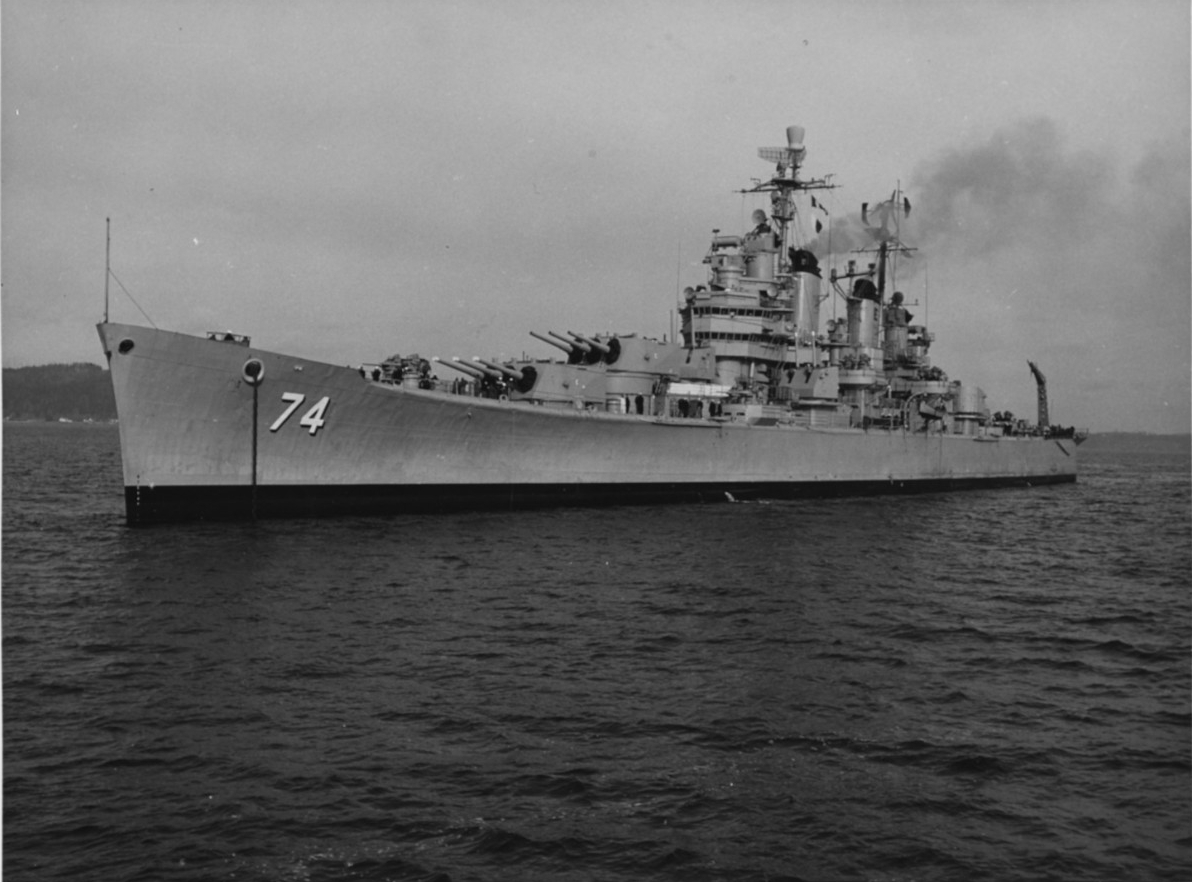 Columbus (CA-74) off the Puget Sound Naval Shipyard, Bremerton, Washington, 14 March 1959. The ship was soon decommissioned to begin conversion to a guided missile cruiser (CG-12). Official U.S. Navy photograph from the collections of the Naval History and Heritage Command, NH 98459.

The capital city of Ohio.

Following a shakedown cruise to Guantanamo Bay, Cuba, in September, and a repair availability at Boston in November, the cruiser sailed for the Pacific and passed through the Panama Canal on 10 December. After brief stops at Pearl Harbor and Buckner Bay, Okinawa, Columbus reached Tsingtao, China, on 13 January 1946 for occupation duty. Serving as flagship for Commander, Cruiser Division One, the warship visited Shanghai, China, as well as Sasebo and Yokosuka, Japan, during the hectic spring months. While in Japanese waters, the cruiser participated in the 1 April Operation "Road's End," the sinking of twenty-four Japanese submarines captured at the end of the war, including the submarine I-58, credited with sinking the American cruiser Indianapolis (CA-35) in the last days of the war. Sailing for home the next day, Columbus remained in west coast waters through the end of the year. The warship made a second Far Eastern cruise from 15 January to 12 June 1947, again serving as cruiser flagship in Chinese waters.

After west coast operations and an overhaul at Puget Sound Naval Shipyard, Columbus cleared Bremerton 12 April 1948 to join the Atlantic Fleet, arriving at Norfolk, Va., 19 May. Columbus made two cruises as flagship of Commander-in-Chief, Naval Forces Eastern Atlantic and Mediterranean, from 13 September 1948 to 15 December 1949 and from 12 June 1950 to 5 October 1951, and one as flagship of Supreme Allied Commander, Atlantic, during parts of NATO Operation "Mainbrace" from 25 August to 29 September 1952. She cruised in the Mediterranean from October 1952 through January 1953, serving part of that time as flagship of the 6th Fleet. Now flagship of Cruiser Division 6, she returned to the Mediterranean from September 1954 to January 1955. Between deployments, Columbus received necessary overhauls and carried out training operations along the east coast and in the Caribbean. 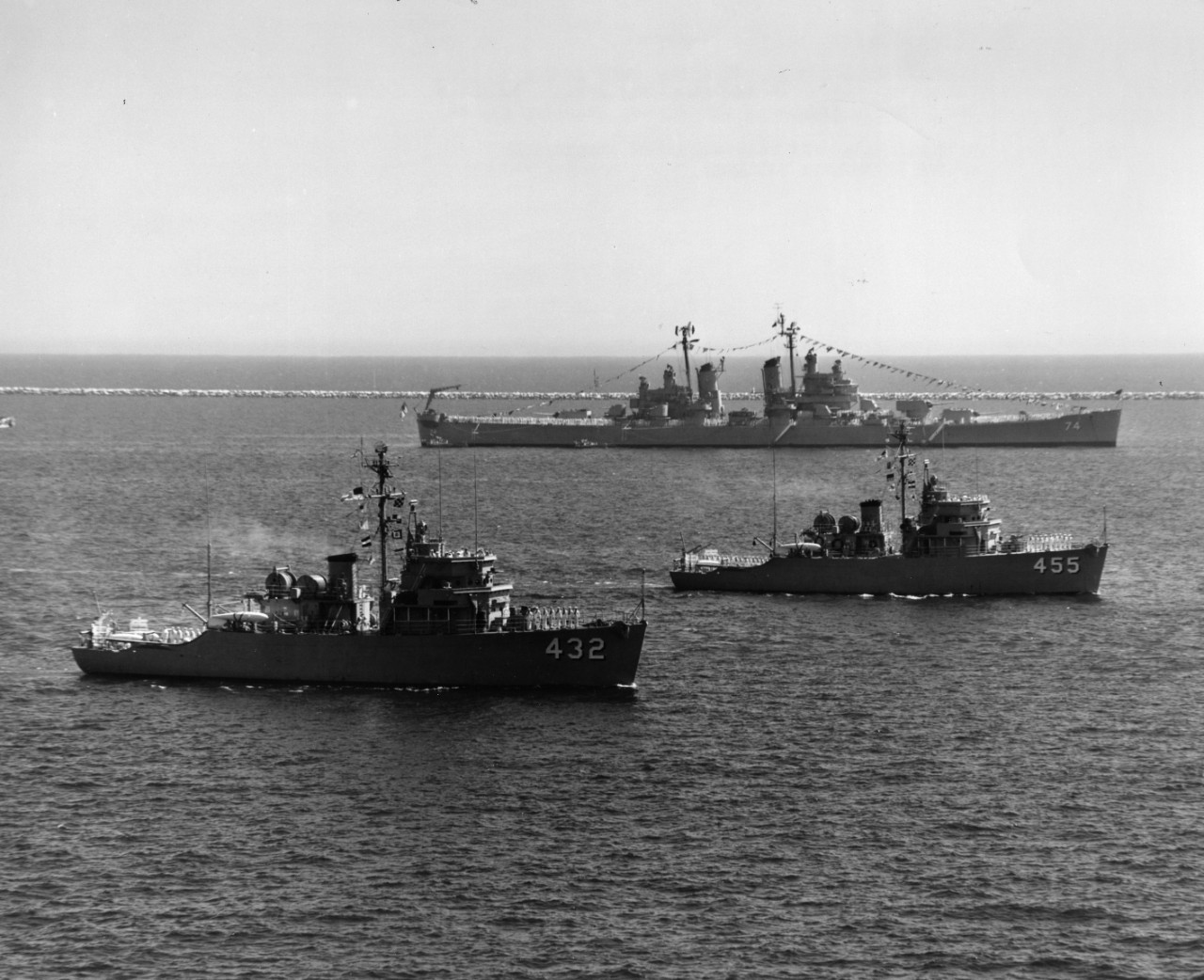 Reassigned to the Pacific Fleet, Columbus cleared Boston 8 November 1955 for Long Beach, Calif., where she arrived 2 December. Just a month later, on 5 January 1956, she sailed for Yokosuka, Japan, and operated with the 7th Fleet until she returned to Long Beach 8 July. Columbus made two more cruises to the Far East in 1957 and 1958. During the late summer of 1958, her presence was a reminder of American strength and interest as she patrolled the Taiwan Straits during the crisis brought on by the renewed shelling of the offshore islands by the Chinese Communists. On 8 May 1959, Columbus went out of commission at Puget Sound Naval Shipyard to begin her conversion to a guided missile cruiser, and she was reclassified CG-12, 30 September 1959.

Recommissioned 1 December 1962, Columbus served in the Atlantic Fleet for the next fourteen years, decommissioning at Portsmouth, Virginia, on 31 January 1975. Struck from the Navy list on 9 August 1976, the hulk was sold for scrap to Consolidated Andy Inc., Brownsville, Texas, on 3 October 1977.