The Saga of a Ship and Its Crew 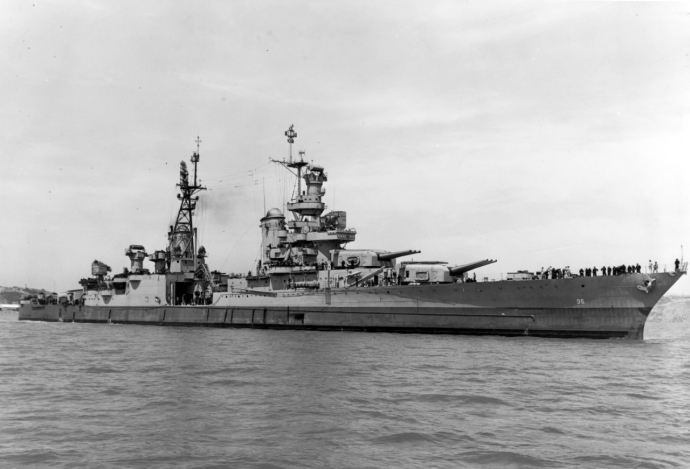 19-N-86911. USS Indianapolis (CA-35). Off the Mare Island Navy Yard, California, 10 July 1945, after her final overhaul and repair of combat damage. Photograph from the Bureau of Ships Collection in the U.S. National Archives. Download image.

The loss of USS Indianapolis (CA-35) was a tragic moment following the completion of a secret mission that directly contributed to the end of World War II. After a successful high-speed run to deliver atomic bomb components to Tinian, the decorated Portland-class cruiser continued to Guam. Indianapolis was en route from Guam to Leyte when she was torpedoed and sunk by the Japanese submarine I-58 within the first hour of 30 July 1945. The following resources, available on the NHHC website, document the history of Indianapolis, the sinking, the aftermath of the tragedy, and the discovery of the ship's wreck on 19 August 2017.

Documents Relating to the Loss of Indianapolis
Historians at the Naval History and Heritage Command have developed an online collection of primary documents and images. As tragic as the loss was, the Navy learned from its mistakes and implemented changes that improved reporting procedures, requirements for ship escorts, and increased lifesaving equipment. Documents in the collection provide information on the routing and sinking of the ship, the available intelligence, rescue operations, and the investigation and court martial that followed. The online collection also includes photographs of the survivors of Indianapolis in addition to paintings by combat artist Alexander Russo.

Final Contact: USS Indianapolis (CA-35) Passes USS LST-779, 29 July 1945
In this July 2016 paper, an NHHC historian discusses information about the last visual contact of Indianapolis with a U.S. Navy ship and what this indicates about the route of Indianapolis before the sinking.

Frequently the flagship of the 5th Fleet, Indianapolis served with honor from Pearl Harbor through the last campaign of World War II, earning ten battle stars.

Photos of Indianapolis
Digitized images from the NHHC Photo Archives include views of the ship during World War II. Photos pertaining to the loss of Indianapolis include two images of the Japanese submarine I-58. 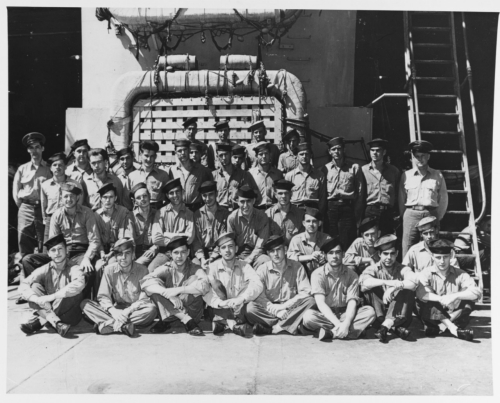 Final Overhaul Photos
This subset of the NHHC Photo Archives’ USS Indianapolis collection depicts the ship in July 1945 after her final overhaul at Mare Island.  She arrived at Mare Island under her own power after being badly damaged by a kamikaze bomb in the pre-invasion of Okinawa the morning of 31 March 1945.

USS LST-779 Ship History
The day before the sinking, Indianapolis made visual contact with another U.S. Navy ship, which NHHC historians have identified as USS LST-779. 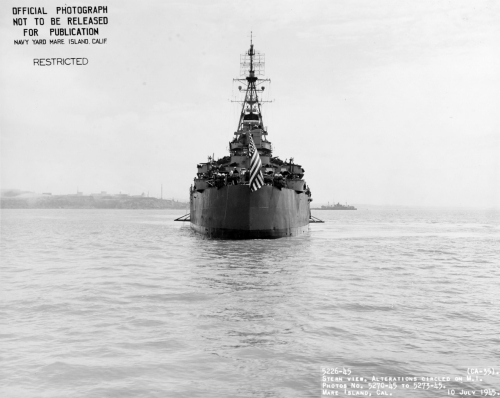 19-N-86914. USS Indianapolis (CA-35). View from astern, off the Mare Island Navy Yard, California, 10 July 1945, after her final overhaul. Photograph from the Bureau of Ships Collection in the National Archives. This photo has been released and is available for public use. Download image.

The following ships were involved in the rescue of survivors from USS Indianapolis:

The Burden of Command: The Experience of Captain Charles Butler McVay III
NHHC Historian Richard Hulver discusses the weight and burden of command visible in the words and actions of Capt. McVay following the disaster.

The Sinking of USS Indianapolis: Press Releases and Related Sources
The Navy Department Library Online Reading Room includes Navy Department press releases on the investigation and court martial of Captain Charles B. McVay III. Also available are oral histories from McVay and another survivor, Lieutenant Commander Lewis L. Haynes, and the Allied interrogation of Commander Mochitsura Hashimoto of the Japanese submarine I-58 regarding wartime tactics. 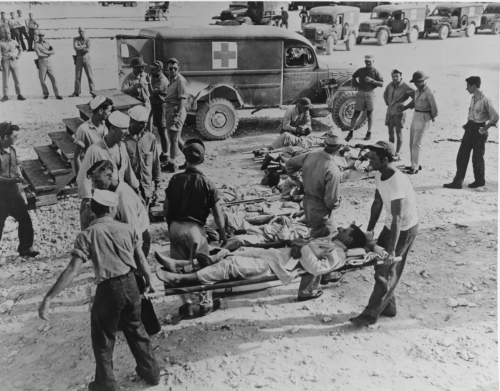 On 19 August 2017, the U.S. Navy–supported expedition led by entrepreneur-philanthropist Paul G. Allen announced that it had located the wreck of Indianapolis. This Sextant blog entry recaps the exhilarating culmination of the search.

The Navy's Role in Finding Indianapolis

Dr Richard Hulver, NHHC historian, and Dr. Robert Neyland, NHHC Underwater Archeology Division, recount in The Sextant how the successful search for the Indianapolis wreck site was based on exhaustive research conducted by NHHC.

Lest We Forget: USS Indianapolis and Her Sailors

In this contribution to The Sextant, NHHC Director Sam Cox discusses why the saga of Indianapolis remains significant. The ship and her crew's story can serve as inspiration to current and future Sailors enduring situations of mortal peril. There are also lessons learned (and in the case of Indianapolis, lessons re-learned) that need to be preserved and passed on, so that the same mistakes can be prevented, and lives saved.

The Legacy and Lessons Learned

Looking Beyond the Sharks: The Legacy of USS Indianapolis
NHHC Historian Richard Hulver discusses the legacy of Indianapolis in this 29 July 2016 Sextant blog post.

NHHC Director’s Remarks at USS Indianapolis 71st Anniversary Reunion
In July 2016, 71 years after the tragedy, survivors and family members gathered to honor and remember the Indianapolis Sailors and Marines. Indianapolis continues to serve her Navy and her nation by teaching our Sailors today something new about themselves and reminding them that we never forget.