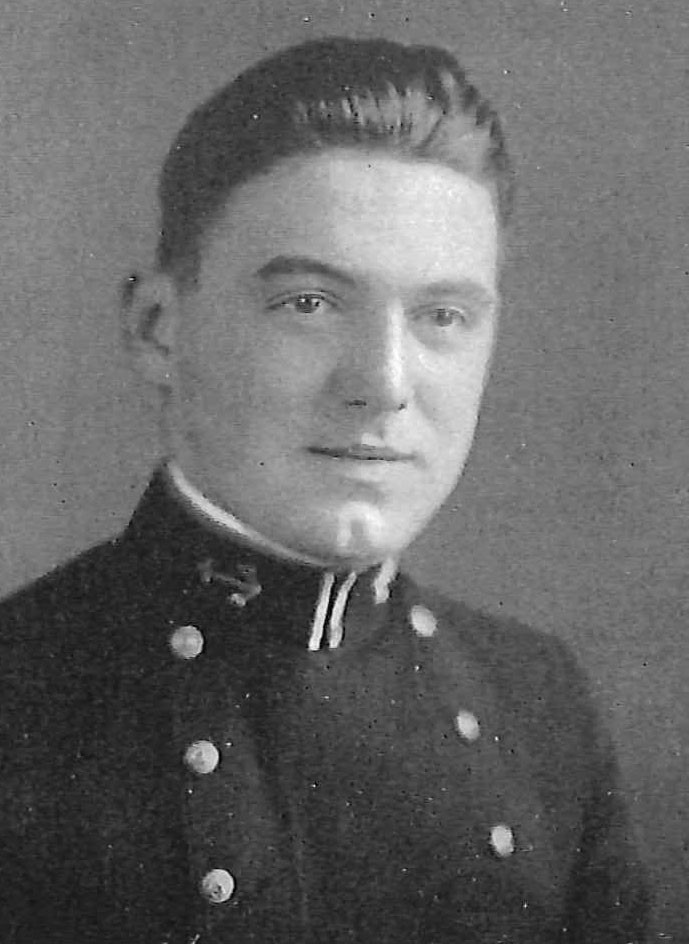 William Campbell Gibson Church was born in Brooklyn, New York, on August 17, 1913, son of the late Rear Admiral A.T. Church, USN, and Mrs. (Marion Campbell Gibson) Church, and grandson of the late Rear Admiral William C. Gibson, USN. He received his early education at various places including Annapolis High School and Severn Preparatory School, and entered the US Naval Academy, Annapolis, Maryland, on June 19, 1930, on appointment from Idaho. As a Midshipman he was a member of the Naval Academy Christian Association, the “N” Club, the Staffs of “Reef Points” and “Lucky Bag,” and was Manager of the Basketball Team. He was graduated and commissioned Ensign on May 31, 1934, transferred from the Line of the Civil Engineer Corps of the Navy in 1936, and subsequently attained the rank of Rear Admiral, to date from May 1, 1961. On June 1, 1964 he was transferred to the Retired List of the US Navy.

After graduation from the Naval Academy in May 1934, he had two years duty as a junior officer on board the USS California. Before his detachment from that battleship, he was selected for postgraduate instruction in Civil Engineering and on June 30, 1936, reported to Rensselaer Polytechnic Institute, Troy, New York, from which he was graduated in June 1939. Ordered next to Headquarters, Fourteenth Naval District, he had duty as Assistant Public Works Officer, Naval Air Station, Pearl Harbor, and Resident Officer in Charge, Contract NOy-4173 at the Naval Air Stations, Pearl Harbor and Barbers Point, Territory of Hawaii. He was in that assignment at the time of the Japanese attack on December 1941, and remained there until May 1942.

From June until December 1942 he was in charge of construction of the Marine Corps Depot of Supplies, Barstow, California, and for ten months thereafter served as Officer in Charge of Construction at the Naval Ammunition Depot, Hawthorne, Nevada, During the period October 1943 to May 1944 he had duty as Executive Officer of the Naval Construction Training Center, Quoddy Village, Maine. He was next ordered to the Officer Training Center, Construction Battalion Replacement Depot, Camp Parks, California, and from there went overseas where he commanded the 31st Naval Construction Battalion at Iwo Jima and later in the occupation of Japan. In February 1946 he returned to Pearl Harbor to serve as Deputy Director, Pacific Division, Bureau of Yards and Docks with additional duty as Officer in Charge, 10th Naval Construction Brigade.

He remained in the Hawaiian area until July 1948 at which time he returned to the continental limits and reported as Public Works Officer at the Naval Air Station, Patuxent River Maryland, where he remained until June 1950. He was then assigned to the Navy Department, Washington, DC, where he served successively as Head of the CEC Plans Section in the Bureau of Naval Personnel, with additional duty as Military Personnel Officer, Bureau of Yards and Docks; as Executive Assistant in the Construction Division, Bureau of Yards and Docks, and Assistant Chief of the Bureau of Yards and Docks for Administrative Management. That tour was followed by duty as Commanding Officer of the Naval Construction Battalion Center, Port Hueneme, California from August 17, 1953 to March 24, 1956.

He next served as Officer in Charge of Construction, Bureau of Yards and Docks Contracts, Madrid, Spain, and in February 1958 reported as District Public Works Officer, Sixth Naval District, with headquarters in Charleston, South Carolina. He command Naval Construction Battalions, Atlantic, with headquarters at Davisville, Rhode Island, from July 1959 to January 1961, when he became Assistant Chief of the Bureau of Yards and Docks for Construction, Navy Department, Washington, DC.