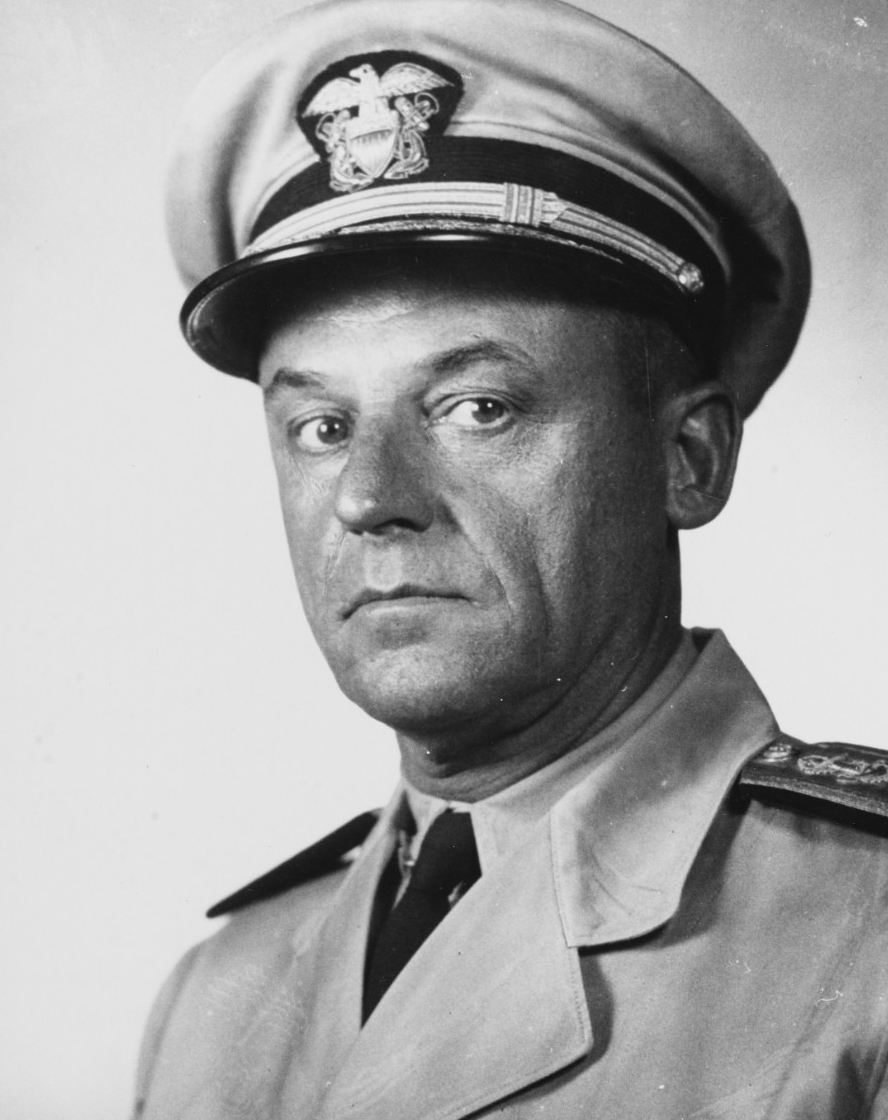 Theodore Edson Chandler was born in Annapolis, Maryland, on 26 December 1894, the son of Rear Admiral Lloyd Horwitz Chandler, USN, and Mrs. (Agatha Edson) Chandler. He attended Manlius (New York) School for Boys and Swavely's Army and Navy Preparatory School before his appointment to the US Naval Academy for the Second District of New Hampshire in 1911. As a Midshipman he won letters in basketball and lacrosse. Graduated and commissioned Ensign on 4 June 1915, he was promoted to Lieutenant (both grades) during World War I, and subsequently advanced in rank to that of Rear Admiral to date from 23 October 1942.

After graduation from the Naval Academy in June 1915, he served at sea in the battleships Florida and New Hampshire, being detached from the latter for torpedo instruction on board USS Montana in April 1917. He left Montana on 2 August 1917 to assist in fitting out USS Conner at the Navy Yard, Philadelphia, Pennsylvania, and served on board that destroyer from her commissioning 12 January 1918, throughout the remaining period of World War I and until April 1919, including the months she was based on Brest, France.

Reporting next to the William Cramp and Sons Shipbuilding Company, Philadelphia, he assisted in fitting out USS Chandler, named in honor of his grandfather, the Honorable William Eaton Chandler (Secretary of the Navy, 1882-1886). He served as Executive Officer of that destroyer from her commissioning 5 September 1919, until December 1920, during which time the Chandler operated with Destroyer Division 26 of Naval Forces in European Waters. Upon his return to the United States in January 1921, he had instruction in Ordnance (Explosives) at the Naval Postgraduate School, Annapolis, Maryland, and the University of Michigan, at Ann Arbor, from which he received the degree of Master of Science in Chemical Engineering in June 1922. (He had been awarded the degree of Bachelor of Science after his graduation from the Naval Academy.) 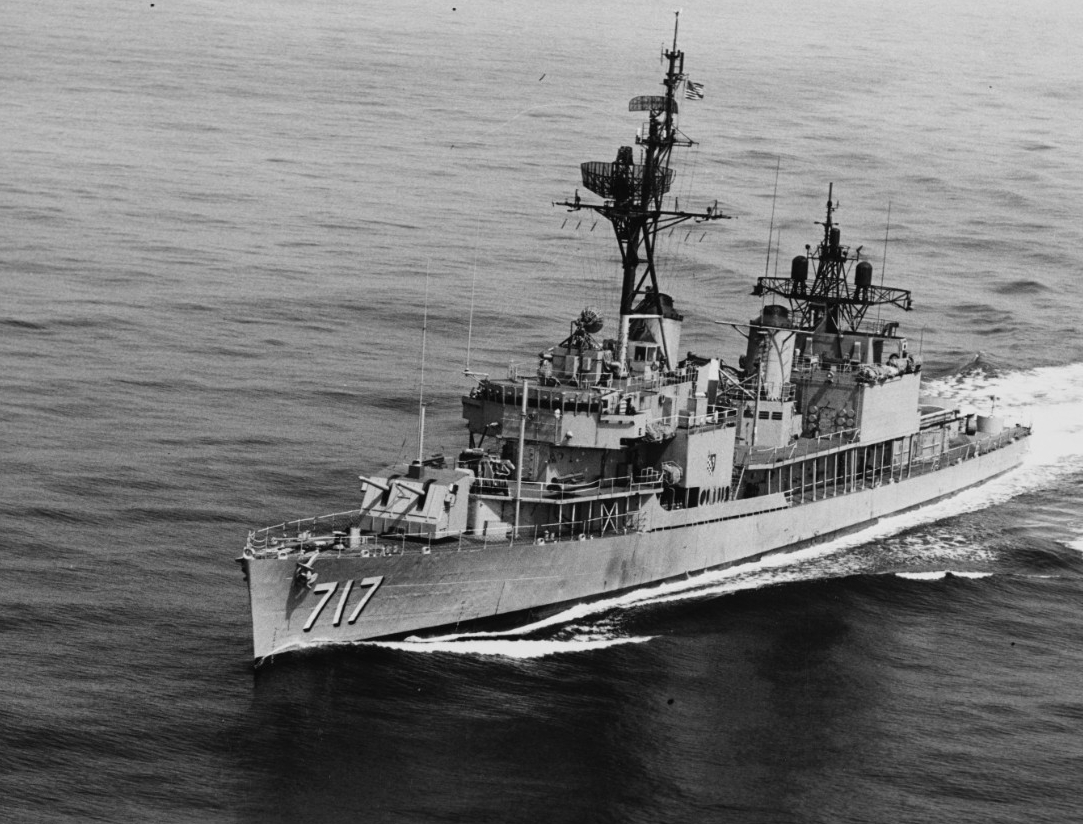 Brief duty under instruction at the Naval Proving Ground, Indian Head, Maryland, the Bureau of Ordnance, Navy Department, Washington, DC, and the Army Proving Ground, Aberdeen, Maryland, he left the latter in June 1923 for duty in connection with fitting out USS West Virginia at the Newport News Shipbuilding and Dry Dock Company, Newport News, Virginia. He served on board that battleship from her commissioning, 1 December 1923, until January 1925, when he was transferred to USS Colorado. Detached from the latter battleship in June 1926, he served for two years at the Naval Mine Depot, Yorktown, Virginia.

In June 1928 he joined USS Trenton, Flagship of Commander Light Cruiser Divisions and Division 2, Asiatic Fleet, and served as her Gunnery Officer until April 1929. He then assumed command of USS Pope which, under his command, operated on Yangtze Patrol in China. In September 1930 he returned to the United States, and after instruction at the Army Industrial College, Washington, DC, reported on 25 July 1931, to the Office of Naval Operations, Navy Department, for duty. From 30 May 1932 until 2 February 1934, he served as Gunnery Officer on the Staff of Commander Destroyers, Battle Force, and during the next seventeen months he served as Commanding Officer of USS Buchanan, a destroyer unit of that Force.

Reporting again to the Office of Naval Operations, Navy Department, he was ordered in April 1935 to the American Embassy, Paris, France, and the American Embassy, Madrid, Spain, for duty as Assistant US Naval Attache. While so serving, he had additional duty until April 1938 at the American Legation at Lisbon, Portugal. Returning to the Office of Naval Operations, he remained there briefly before reporting to the New York Shipbuilding Corporation, Camden, New Jersey, to assist in fitting out USS Nashville. From her commissioning in June 1938 until July 1940 he served as that cruiser's Executive Officer.

After more than a year in the Office of the Chief of Naval Operations, Navy Department, he returned to sea in October 1941 as Commanding Officer of USS Omaha. During his command, the Omaha captured the German motorship Odenwald in November 1941 while the latter was masquerading in the South Atlantic as an American Merchant vessel. Identified by Rear Admiral (then Captain) Chandler, the Odenwald was seized and taken to San Juan, Puerto Rico, despite efforts of the German crew to scuttle her. For this service he was awarded a Letter of Commendation, with Ribbon, from the Secretary of the Navy, as follows:

"Your operations on the occasion of the seizure of the German Motor Ship ODENWALD on November 6, 1941, are noted with great interest. The identification of the ODENWALD by you as a hostile ship, even though disguised as to nationality by the flying of and otherwise subversive use of the United States flag, the subsequent salvage of and the taking into port of the Odenwald under her own power by the salvage and boarding parties sent by your direction from the Task Group under your command bespeaks of the efficient plans made for such an emergency, and made possible the saving of this ship under the attendant hazardous conditions. You are hereby commended for your initiative and sound judgment on this occasion."

Detached from command of the Omaha on 6 February 1943, after continuing her South Atlantic Patrol operations following the United States' entry into World War II, he served (in the rank of Rear Admiral) as Commander All Forces, Aruba-Curacao, Netherlands East Indies, from 27 April 1943 until 25 July 1944. "For exceptionally meritorious conduct in the performance of outstanding services to the Government of the United States (in that command)..." he was awarded the Legion of Merit. The citation continues:

"Exercising sound judgment and splendid initiative in carrying out his many and varied tasks, Rear Admiral Chandler was largely responsible for the successful cooperative employment of the combined United States and Netherlands Naval Surface Forces and of the United States Naval and Army Air Forces in waging vigorous and effective warfare on enemy submarines and, by carefully planned security measures and the skillful disposition of his units, provided expert protection for the vital oil industry in this strategic area. In his contacts with Netherlands and Venezuelan civil and military officials, Rear Admiral Chandler displayed marked diplomatic ability, and his resultant productive relationships with their respective governments proved of great value in the efficient execution of his highly important duties."

"For exceptionally meritorious conduct...as Commander of an Assault Group of the Western Naval Task Force (under command of Rear Admiral J. M. Mansfield of the Royal Navy) prior to and during the amphibious invasion of Southern France in August 1944. Rear Admiral Chandler expertly planned and successfully carried out operations involving the pro-assault landing of special service troops on the strategic Islands of Levant and Port Gros and of a French Commando Group in the vicinity of Cape Negros on the Southern Coast of France to eliminate the enemy threat against Allied assault shipping and to secure the left flank of the main assault areas against infiltration from the west. The assault group, under his skillful and determined leadership, executed the landings during darkness, with complete tactical surprise and with minimum losses to the participating forces and quickly overcame enemy resistance resulting in the early occupation of this important ground. His conduct of those surprise landings thereby materially assisted in the expeditions and effective launching of the initial assault and its rapid follow-up..."

Admiral Chandler's death, during operations for the liberation of Luzon in the Philippines, was announced by the Navy Department on 16 January 1945. He was posthumously awarded the Silver Star Medal and the Navy Cross, citations for each following in part:

Silver Star Medal: "For conspicuous gallantry and intrepidity as Commander of a Battleship Division in action against major units of the enemy Japanese fleet during the Battle of Surigao Strait in the early hours of October 25, 1944. When a formidable column of Japanese warships entered the narrow confines of the Strait and advanced under cover of darkness toward our waiting forces, Rear Admiral Chandler, with his division placed among other battleships in the strategic T-formation across the northern end of Surigao, hurled the full power of his heavy guns at the confused enemy force. Directing the shattering broadsides of his mighty vessels with unrelenting fury, he waged fierce battle against the enemy in a prolonged engagement which resulted in the destruction of two Japanese battleships and three destroyers before effective return fire could be brought to bear on our ships. Subsequently retiring his division unscathed from the action, Rear Admiral Chandler, by his brilliant leadership, outstanding professional skill and indomitable fighting spirit in the face of tremendous odds, contributed materially to the defeat of the enemy in this decisive action..."

Navy Cross: "For extraordinary heroism as Commander, Cruiser Division FOUR, in action against enemy Japanese forces in Lingayen Gulf, Philippine Islands, on January 6, 1945. Skillfully coordinating the fire of his division with that of other heavy naval units during the initial bombardment of Luzon prior to scheduled landing operations at Lingayen, Rear Admiral Chandler ordered the smashing broadsides of his powerful guns with unrelenting aggressiveness despite a heavy overcast which reduced visibility and while under persistent attack by enemy aircraft. Observing the progress of operations from an exposed position on the flag bridge when a Japanese suicide bomber attacked and hit his cruiser, setting the flag bridge afire, he emerged from the raging inferno with his clothing ablaze, Determined to remain in action, he steadfastly continued to direct his units until compelled by his Chief of Staff to proceed to the dressing station for treatment of severe burns. Stout-hearted and indomitable in the face of almost certain death, Rear Admiral Chandler succumbed to his injuries the following day. By his inspiring devotion to duty and heroic spirit of self-sacrifice throughout, he enhanced and sustained the highest traditions of the United States Naval service. He gallantly gave his life in defense of his ship."

In addition to the Navy Cross, Silver Star Medal, Legion of Merit with Gold Star and the Commendation Ribbon, Rear Admiral Chandler had the Victory Medal, Destroyer Clasp; the Yangtze Service Medal; American Defense Service Medal with bronze "A;" American campaign Medal; European-African-Middle Eastern Campaign Medal; and was entitled to the Asiatic-Pacific Campaign Medal; and the World War II Victory Medal. He had also been awarded the Orden Nacional de Cruzeriro de Sul (grade of official) and diploma by the Government of Brazil, and the Legion of Honor (Officer)  and diploma by the Government of France; and the Order of Orange-Nassau with Swords (rank of Grand Officer) had been conferred upon him by Queen Wilholnina of The Netherlands.

The USS Theodore E. Chandler, named in honor of Rear Admiral Chandler, was christened by his widow, Mrs. T. E. (Beatrice Fiarfax) Chandler, at the launching of that destroyer (DD-717) at the Federal Shipbuilding and Dry Dock Company, Newark, New Jersey, on 20 October 1945.