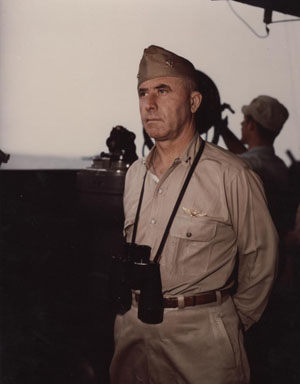 Alfred Eugene Montgomery was born in Omaha, Nebraska, on 12 June 1891, son of Eugene and Julia Smith Montgomery, both now deceased. He attended public school in Omaha and Brookline (Massachusetts) High School before his appointment to the United States Naval Academy, Annapolis, Maryland, from Nebraska in 1908. Graduated with credit and commissioned Ensign on 8 June 1912, he subsequently advanced to the rank of Rear Admiral to date from 29 May 1942. He served in the temporary rank of Vice Admiral from 10 December 1945 until 30 August 1947. Upon his transfer to the Retired List of the Navy on 3 June 1951 he was advanced to that rank with the approval of the Senate.

After graduation from the Naval Academy in June 1912 he was assigned to the USS Virginia, serving in that battleship, a unit of the Atlantic Fleet, until October 1913. During that time and extending to February 1914, he had additional duty as an Instructor in the frigate Constellation at the Naval Training Station, Newport, Rhode Island. From February 1914 until July 1915 he served successively in the USS Tacoma, USS Chester, and USS Connecticut. He had instruction in submarines on board the USS Tonopah, and joined the USS E-1 in August 1915, serving as Executive Officer of that submarine until November 1916. Ordered to the Navy Yard, Mare Island, California, where the USS F-1 and F-2 were fitting out, he commanded the F-1 from her commissioning, 13 June, until 17 December 1917 when she sank after colliding with the USS F-3 during maneuvering exercises.

After fitting out the submarine R-20 at the Union Iron Works, San Francisco, California, he was Commanding Officer from her commissioning on 26 October 1918, until September 1920. During that period he had elementary training in seaplanes with the Naval Air Detachment at Pearl Harbor, TH. In October 1920 he again reported to the Union Iron Works at San Francisco, for duty in charge of fitting out the USS S-32 as Prospective Commanding Officer. Detached in January 1921 before her commissioning, he was assigned duty as Superintendent of New Works in the Machinery Division, Navy Yard, Mare Island, California.

In July 1925 he was assigned to the Naval Air Station, San Diego, California, where he served as Assembly and Repair Officer until February 1926, and then as Executive Officer until February 1928. Returning to sea, he headed the Air Department of the USS Langley, aircraft carrier for eighteen months. In July 1929 he assumed command of Torpedo Bombing Squadron TWO-B, Aircraft Squadrons, Battle Fleet, based on the aircraft carrier Saratoga, with additional duty as Wing Commander, Bombing Torpedo Wing, Battle Fleet.

From August 1930 until May 1932 he commanded the Naval Air Station, Seattle, Washington. Following brief duty on the Staff of Commander, Aircraft Battle Force in connection with fitting out squadrons in the USS Langley for Asiatic assignment, he served from July 1932 until May 1933 as Aviation Officer on the Staff of Commander Cruisers, Scouting Force, in the flagship Chicago. The following year he was in charge of the Aviation Section, Ship's Movement Division, Office of the Chief of Naval Operations, Navy Department, Washington, DC. In July 1934 he assumed command of the Naval Air Station, Anacostia, DC.

Returning to sea in February 1936, reported as Plans and Operations Officer on the Staff of Commander Aircraft, Battle Force, on board the flagship Saratoga. In November of that same year he became Executive Officer of the USS Ranger, and from July 1938 until July 1939 served as Executive Officer of the Naval Air Station, San Diego, California. He then headed the Flight Division, Bureau of Aeronautics, Navy Department, for one year.

Assuming command of the USS Ranger in June 1940, he remained in that duty until June 1941 when he reported as Chief of Staff and Aide to Commander Aircraft, Atlantic Fleet, later redesignated Commander Carriers, Atlantic Fleet. He was serving in that assignment when the United States entered World War II on 8 December 1941. Detached six months later, he next commanded the Naval Air Station, Corpus Christi, Texas, with additional duty from October 1942 as Chief of Air Intermediate Training, Air Intermediate Training Command, at Corpus Christi. In November 1942 he assumed command of the Naval Air Training Center, Corpus Christi. He was awarded the Legion of Merit and cited as follows:

'For exceptionally meritorious conduct...as Commandant of the Naval Air Station and subsequently as Commandant of the Naval Air Training Center, Corpus Christi, Texas from June 13, 1942 to June 14, 1943. Assigned the task of transforming a training station with auxiliary fields to a training center with seven individual commands, (he) achieved distinctive success in executing a program involving vast expansion of facilities and personnel...'

He reported in August 1943 as Commander, Carrier Division TWELVE, and in March 1944 transferred as Commander Carrier Division THREE, both operating with the Pacific Fleet. Forces under his command participated in the operations as one of the hard-hitting carrier groups attached to the famed Task Force FIFTY-EIGHT and Task Force THRITY-EIGHT. For distinguished services in these commands he was awarded the Distinguished Service Medal, the Navy Cross, and two Gold Stars in lieu of a Second and Third Distinguished Service Medal. The citations, in part, follow:

Distinguished Service Medal: '...as Commander of a Carrier Task Group in action against enemy Japanese forces in the Central and South Pacific Areas from November 18 to December 10, 1943...(He) directed the operations of his Task Group in repeated aerial attacks against Tarawa, Gilbert Islands, through the preparatory periods and in support of the subsequent landings, greatly assisting our forces in the successful occupation of this strategic island...carried out numerous vital air raids on Japanese shipping, aircraft and installations on Kwajalein Atoll, Marshall Islands, despite a persistent hostile night attack lasting five hours...and previous operations against Rabaul, New Britain, and Wake Island, contributed in large measure to our ultimate victories in the Pacific Areas...'

Navy Cross: 'For extraordinary heroism as Officer in Tactical Command of a Carrier Task Group, in action... in the vicinity of Saipan, February 12, 1944. With his task group subjected to repeated attacks by enemy torpedo and bomber planes, (he)...skillfully and successfully directed their gunfire and combat air patrols in destroying seventeen hostile planes...delivered damaging attacks against enemy shipping, aircraft and shore installations and...also obtained valuable photographs. By his outstanding leadership and excellent tactical ability, (he) brought his task group undamaged through this engagement...'

Gold Star in lieu of Second Distinguished Service Medal: '...as commander of a Task Group of Carriers and screening vessels in operations against the Japanese forces from March through June 1944. In attacks on Palau...Marcus and Wake...the aircraft under his command inflicted great damage on enemy shipping and shore installations. At Hollandia... his task group contributed invaluable assistance to the Amphibious forces engaged in establishing a beachhead and continued to support advances on land after the beachhead was firmly in our hands. At Truk...finally in the battle for the Marianas and in the attacks on the Japanese fleet in June, 1944 his forces participated in the decisive destruction of Japanese air resistance and inflicted damaging blows on the important fleet units.

Gold Star in lieu of Third Distinguished Service Medal: '...as Commander of Task Group THIRTY-EIGHT POINT ONE, operating against enemy Japanese forces in the Philippine Islands Area from October 30, 1944 to December 29, 1944. After effectively organizing and expeditiously developing the forces of his command (he) ably directed his group in highly successful concentrated operations against the enemy, inflicting severe and costly damage on the aircraft, shipping and shore installations at Leyte, Manila and Luzon. By his superb professional skill in all the phases of aerial warfare and his capable leadership, he inspired the men of his command to maximum effort throughout this critical period and contributed to the sustained prosecution of the war in this vital theater...'

In January 1945 he was ordered to duty as Commander Fleet Air, West Coast, with headquarters at the Naval Air Station, San Diego, California. He was awarded the Gold Star in lieu of a Second Legion of Merit for '...outstanding services to the Government of the United States as Commander Fleet Air, West Coast, from February 12, to July 14, 1945...(He) successfully preformed the functions of his command in supplying personnel, equipment and material to support combat units. By his keen insight into the needs of the forward areas and skillful coordination of the activities of Fleet Air, West Coast, (he) contributed materially to the success of the Naval Air Force in the Pacific...'

On 20 July 1945 he assumed command of the Air Force, Pacific Fleet and in August 1946 reported, in the rank of Vice Admiral, as Commander FIFTH FLEET, Pacific. Upon the reorganization of the operating forces on 1 January 1947, leaving one fleet in each of the two oceans, he became Commander FIRST Task Fleet in the Pacific, USS Iowa, flagship. In August 1947 he reported, in his permanent rank of Rear Admiral, for duty as Commandant, Seventeenth Naval District, with additional duty as Commander Alaskan Sea Frontier and Commander Northern Pacific Area, with headquarters in Kodiak, Alaska.

In June 1949 he assumed command of the US Naval Operating Base, Bermuda, and Bermuda Group, Atlantic Fleet, and in February 1950 became Commander Fleet Air, Jacksonville, Florida. He was transferred to the Retired List in July 1951.

Vice Admiral Montgomery died at the Naval Hospital, Bremerton, Washington on 13 December 1961. He was married to the former Alice Claire Smith of Oakland, California, and had a daughter and a son, Lieutenant Brooke Montgomery, USN, Deceased, who was killed in a plane crash on 1 February 1956.

In addition to the Navy Cross; the Distinguished Service Medal with two Gold Stars; and the Legion of Merit with Gold Star, Vice Admiral Montgomery has the Mexican Service Medal (USS Tacoma); Navy Expeditionary Medal; the Victory Medal (World War I); American Defense Service Medal, Fleet Clasp; Asiatic-Pacific Campaign Medal; World War II Victory Medal; and the Philippine Liberation Ribbon with one star. He also has the Ribbon for with stars and facsimiles of the Presidential Unit Citations awarded to the Carriers Essex, Hornet, Bunker Hill, and Yorktown.

Vice Admiral Montgomery was a member of the Army-Navy Country Club of Washington, DC.