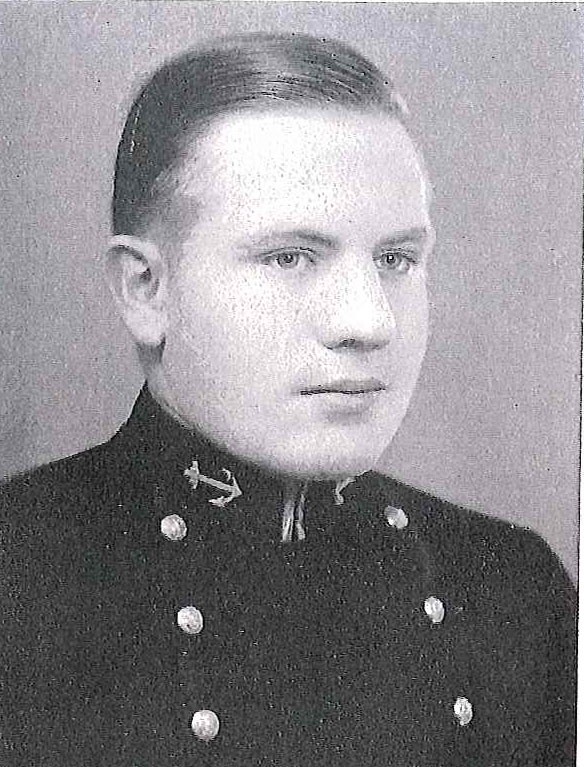 Robert Wayne Denbo was born on August 2, 1906, in Orleans, Indiana, son of the late Dr. Edward S. Denbo and Mrs. Ruby (Murtone) Denbo. He attended the University of Illinois at Urbana, for one year, before his appointment to the US Naval Academy, Annapolis, Maryland, from his native state in 1925. As a Midshipman he participated in wrestling and football. Graduated and commissioned Ensign on June 6, 1929, he subsequently attained the rank of Captain to date from March 30, 1945.

Following graduation from the Naval Academy in 1929, he joined USS Lexington, and when detached in October 1930 reported for flight training at the Naval Air Station, Pensacola, Florida. Designated Naval Aviator on September 4, 1931, he was assigned to USS Pennsylvania as Aviation Officer.

Between June 1934 and May 1936 he had duty with Patrol Squadron SIX, based on Pearl Harbor, Territory of Hawaii, after which he served with Scouting Squadron TWO, attached to USS Saratoga. In June 1937 he transferred to Patrol Squadron SEVEN, aboard USS Wright, and continued to serve with that squadron until June 1939 when he was ordered to return to the United States.

From June 1939 to April 1941 he was an Instructor at the Naval Air Station, Pensacola, Florida, after which he joined USS Long Island, the Navy’s first escort carrier. Detached from that vessel in February 1942, he reported to the Naval Aircraft Factory, Philadelphia, Pennsylvania, and for “outstanding performance of duty…” in the latter assignment, received a Letter of Commendation, with authorization to wear the Commendation Ribbon, from the Secretary of the Navy. The citation continues in part:

“…Engaging in carrier acceptability tests of the majority of planes used during the war, Captain Denbo determinedly prosecuted the program despite the unusual hazards involved and contributed materially to the success of aircraft operations in the fleet…”

In April 1943 he joined USS Santee as Executive Officer and for “extraordinary heroism (in that assignment)…during action against enemy Japanese forces in the Battle of Leyte Gulf, October 25, 1944…” he was awarded the Navy Cross. He is also entitled to the Ribbon for, and a facsimile of the Presidential Unit Citation awarded the Santee. The citations follow in part:

Navy Cross: “When his ship sustained severe damage after repeated enemy aerial attacks, (he) skillfully maintained adequate control and directed fire fighting measures at the scene of the first attack before proceeding to another damaged part of the ship to supervise the disposal of bombs and burning depth charges which were in momentary danger of exploding. By his courage, initiative and devotion to duty throughout, Captain Denbo was instrumental in saving the vessel from internal explosions…”

Presidential Unit Citation: “…Operating in the most advanced areas, the Santee and her attached air squadrons struck with sustained fury at hostile warships, aircraft, merchant shipping and shore installations in the face of frequent and prolonged enemy air attacks. During the historic Battle for Leyte Gulf, the valiant Santee withstood successively the shattering explosion of a suicide plane in her flight deck and a torpedo hit in her side, stoutly conducting flight operations and fighting her antiaircraft guns throughout the period of emergency repairs…”

He became Operations Officer on the staff of Commander Task Group THIRTY EIGHT POINT ONE in November 1944, and for duty in this assignment he was awarded the Bronze Star Medal, with Combat Distinguishing Device “V.” The citation follows in part: “For meritorious service…during operations against enemy Japanese forces at Luzon, Visayas, Formosa, Nansei Shoto and the China Coast from November 16, 1944, to January 26, 1945…(He) rendered valuable service to his commanding officer in detailed planning and coordination of air operations which resulted in smooth and effective attack and defense and contributed materially to the success of widely varying types of offensive operations carried out by the Task Group…”

He is also entitled to the Ribbon for, and a facsimile of the Presidential Unit Citation awarded USS Yorktown, on which he served briefly during the time cited: “For extraordinary heroism in action against enemy Japanese forces in the air, at sea, and on shore in the Pacific War Area from August 31, 1943, to August 15, 1945. Spearheading our concentrated carrier-warfare in forward areas, the USS Yorktown…with her gallant officers and men rendered loyal service in achieving the ultimate defeat of the Japanese Empire.”

Transferred in February 1945, as Operations Officer, to the staff of Commander Fleet Air, West Coast, he served as such until June 1947, when he assumed command of USS Valcour, based at Coco Solo, Canal Zone. Relieved of command of that seaplane tender in August 1948, he was assigned to the Aircraft Training Branch in the Office of the Deputy Chief of Naval Operations for Air, Department of the Navy, Washington, DC. On September 10, 1951 he reported as US Naval Attache and US Naval Attache for Air at Melbourne, Australia, with similar duty at Wellington, New Zealand. Two years later he returned to the Office of the Chief of Naval Operations for a tour of duty as Assistant Director of the Aviation Training Division.