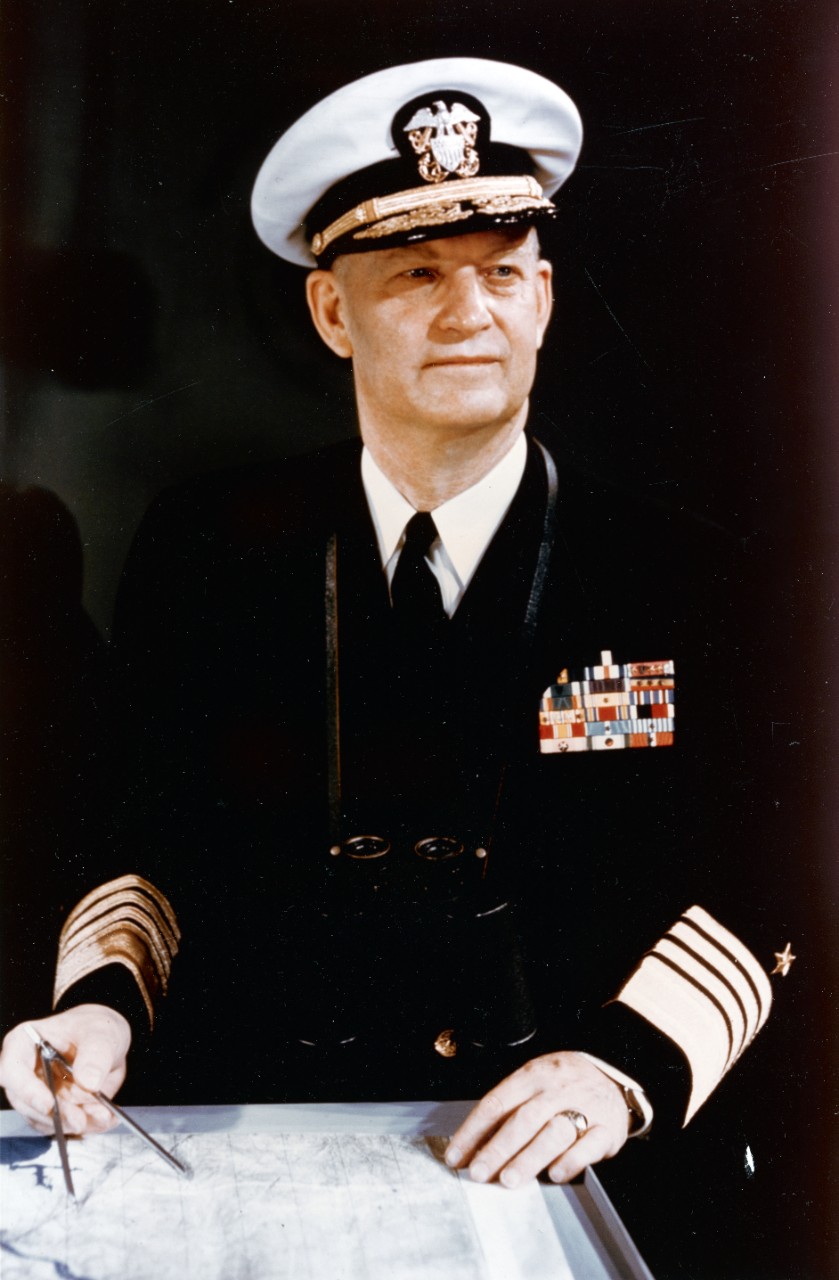 From Destroyer Command in the South Pacific, he reported in March of 1944 as Chief of Staff to Commander, Fast Carrier Task Force, Admiral Marc Mitscher. While serving with this famed carrier force, Burke was promoted to Commodore, and participated in all its naval engagements until June 1945 shortly before the surrender of Japan. He was aboard both USS Bunker Hill CV-17) and USS Enterprise (CV-6) when they were hit by Japanese suicide planes during the Okinawa campaign.

Admiral Burke received numerous combat awards during his forty-two years in the Navy including the Navy Cross, the Distinguished Service Medal, the Legion of Merit and the Purple Heart. But none wase more cherished than two awards which came early in his career. In 1928 while serving aboard USS Procyon (AK-19), he was commended for the "rescue of shipwrecked and seafaring men," and in 1939 while serving in his first command, USS Mugford (DD-389), he was commended when his destroyer obtained an unprecedented perfect score during short-range battle practice, thereby winning the Destroyer Gunnery Trophy for 1939-1940.

For his service in Destroyer Squadron 23, Admiral Burke was awarded the Distinguished Service Medal, the Navy Cross, the Legion of Merit, and is entitled to the Ribbon for, and a facsimile of, the Presidential Unit Citation awarded Destroyer Squadron 23. The citations follow, in part:

Distinguished Service Medal: "For exceptionally meritorious service to the Government of the United States in a duty of great responsibility as Commanding Officer of a Destroyer Division and subsequently a Destroyer Squadron operating against enemy Japanese forces in the South Pacific Area from early February to December 1, 1943. Throughout this period, Captain Burke led his forces in many offensive operations...His indomitable fighting spirit and great personal courage contributed directly to the success of our forces in that area and were in keeping with the highest traditions of the United States Naval Service."

Navy Cross: "For extraordinary heroism and distinguished service...as the Commander of a destroyer squadron operating in the Northern Solomon Islands area during the period from midnight October 30 to noon November 2, 1943. (His) squadron, as a part of a task force, participated in the first bombardment of the Buka-Bonis area and also in the first daylight bombardment of the Shortland area...During the night of November 1-2, a heavier gunned Japanese naval force was met and decisively defeated with the loss to the enemy of one cruiser and four destroyers sunk, and an additional two cruisers and two destroyers damaged. The action contributed much to the success of our operations at Empress Augusta Bay. Thereafter, a heavy air attack by sixty-seven enemy dive bombers was fought off with a total of seventeen enemy planes being destroyed..."

Legion of Merit (with Combat "V"): "For exceptionally meritorious conduct...as Commander Destroyer Squadron Twenty-three, in action against enemy Japanese forces northwest of the Bismarck Archipelago, at Kavieng; New Ireland, and Duke of York Island, February 17 to 23, 1944...(He) expertly directed his squadron in destroying two Japanese naval auxiliary vessels, one large cargo ship, a mine layer, four barges and inflicting severe damage on enemy shore installations and subsequently effected a skillful withdrawal without damage to his vessels..."

Presidential Unit Citation to Destroyer Squadron 23: "For extraordinary heroism in action against enemy Japanese forces during the Solomon Islands Campaign, from November 1, 1943 to February 23, 1944...Destroyer Squadron Twenty-three operated in daring defiance of repeated attacks by hostile air groups, closing the enemy's strongly fortified shores to carry out sustained bombardments against Japanese coastal defenses and render effective cover and fire support for the major invasion operations in this area...The brilliant and heroic record achieved by Destroyer Squadron Twenty-three is a distinctive tribute to the valiant fighting spirit of the individual units in this indomitable combat group of each skilled and courageous ship's company..."

Gold Star in lieu of Second Distinguished Service Medal: "For...outstanding service...as Chief of Staff to Commander First Carrier Task Force, Pacific, during action against enemy Japanese forces in the Pacific war area from December 15, 1944 to May 15, 1945...Commodore Burke was in large measure responsible for the efficient control under combat conditions of the tactical disposition, the operation, the security and the explosive offensive power of his task force in its bold and determined execution of measures designed to force the capitulation of the Japanese Empire...throughout the seizure of bases at Iwo Jima and Okinawa, including two carrier strikes on Tokyo, a carrier strike on the Kure Naval Base, and an engagement with the Japanese Fleet on April 7, in which several hostile men-o-war were destroyed by our aircraft..."

Silver Star Medal: "For conspicuous gallantry and intrepidity as Chief of Staff to Commander FIRST Carrier Task Force in action against enemy Japanese forces in the Pacific War Area, May 11, 1945. When the flagship on which he was embarked was hit by two enemy suicide dive bombers, Commodore Burke proceeded to a compartment in which personnel were trapped by fire and heavy smoke, and succeeded in evacuating all hands. When the flagship to which he had removed his staff was in turn hit by a suicide plane on May 14, he again arranged for the transfer of his command to a new ship. In spite of all difficulties, he maintained tactical control of the Task Force throughout, thereby contributing' materially to the success of the operations..."

Gold Star in lieu of the Second Legion of Merit: "For exceptionally meritorious conduct...as Chief of Staff to Commander, Carrier Task Force, Pacific Fleet, from March 27 to October 30, 1944...(He) planned and executed a long series of successful offensive operations in Support of the reduction of the other perimeter of Japanese defenses in New Guinea, the Carolines, the Marianas, Halmahera, and the Philippine Islands. Largely as a result of Commodore Burke's superb professional skill, tireless energy and coolness of decision throughout these operations and during repeated air attacks carried out in strength against heavily fortified strongholds in enemy-controlled waters, the Pacific Fleet has been brought within range of the Japanese Empire itself to continue our relentless drive against the enemy."

Letter of commendation: "For distinguishing himself in action with the enemy, while serving as a Chief of Staff to Commander First Carrier Task Force, Pacific on 11 May 1945. When the ship in which he was embarked was hit by two enemy aircraft...with utter disregard for his personal safety, (he) efficiently organized the evacuation of endangered personnel. His courage together with his prompt and efficient action was responsible for saving these men..."

From September 1950 until May 1951, he served as Deputy Chief of Staff to Commander US Naval Forces, Far East, and for "exceptionally meritorious conduct (in that capacity) from 3 September 1950 to 1 January 1951..." he was awarded a Gold Star in lieu of the Third Legion of Merit. The citation further states:

"Bringing a sound knowledge of Naval Administration and professional skill to his assigned task, Rear Admiral Burke reorganized the rapidly expanded staff to meet its ever increasing responsibilities and, through his unusually fine conception of the essentials of modern warfare, materially improved the mutual functioning of the Operations, Plans and Intelligence Sections of the Staff...(and) contributed immeasurably to the success of Naval operations in the Korean theater..."

While serving as Commander Cruiser Division Five from May to September 1951, and also as a Member of the Military Armistice Commission in Korea, Admiral Burke was awarded an Oak Leaf Cluster in lieu of the Fourth Legion of Merit, by the Army (Headquarters US Army Forces, Far East) by General Order #5, as follows: "For exceptionally meritorious conduct in the performance of outstanding services as a delegate with the United Nations Command (Advance) in Korea, from 9 July to 5 December 1951. Admiral Burke's keen discernment and decisive judgment were of inestimable value in countering enemy intransigence, misrepresentation and evasion with reasoned negotiation, demonstrable truth and conciliatory measures. As advisor to the Chief Delegate on all phases of the Armistice Conferences, he proffered timely recommendations for solutions of the varied intricate problems encountered. Through skillful assessment of enemy capabilities, dispositions and vulnerable abilities and brilliant guidance of supporting staff officers (he) significantly furthered progression toward success of the United Nation's first armed bid for World Peace."

In addition to the Navy Cross, the Distinguished Service Medal with two Gold Stars, the Legion of Merit with two Gold Stars and Oak Leaf Cluster (Army), the Silver Star Medal, the Commendation Ribbon, the Purple Heart Medal (for wounds received while serving on board the USS CONWAY during July 1943), the Presidential Unit Citation Ribbon with three stars, and the Navy Unit Commendation Ribbon, Admiral Burke had the American Defense Service Medal, Fleet Clasp; the Asiatic-Pacific Campaign Medal with two silver stars and two bronze stars (twelve engagements); the American Campaign Medal; World war II Victory Medal; Navy Occupation Service Medal, Europe Clasp; the National Defense Service Medal; the Philippine Liberation Ribbon; Korean Service Medal, and United Nations Service Medal. He also had been awarded the Ul Chi Medal and the Presidential Unit Citation from the Republic of Korea and the Order of the Rising Sun, First Class by the Government of Japan.