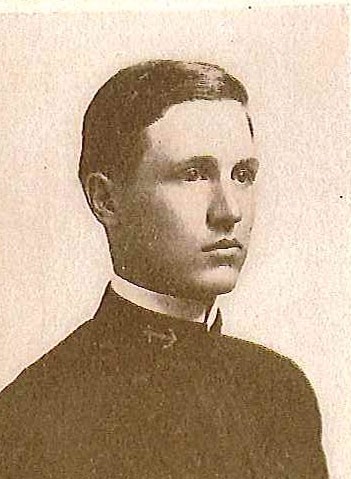 Grattan Colley Dichman was born in New York City, on December 12, 1885. One of the Navy’s early aviators, he was killed in a crash of his plane on October 16, 1924, while on active duty and is buried in Arlington National Cemetery, Arlington, Virginia.

He entered the US Naval Academy, Annapolis, Maryland in July 1903 on appointment from Georgia. As a Midshipman, he was Captain of the Fencing Team. Graduated on June 4, 1907, he served the two years at sea, then required by law, on board USS Nebraska and later USS South Dakota, before he was commissioned Ensign in June 1909. He subsequently advanced in rank to that of Commander, to date from January 1, 1924.

When detached from USS South Dakota in December 1909, he was ordered to Asiatic Station for duty in gunboats of the Asiatic Fleet, including USS Cleveland, USS Wilmington, USS Rainbow, USS Quiros, USS Samar (Commanding Officer) and the cruiser Albany. Returning home in December 1913, he next served at the Navy Yard, Norfolk, Virginia, where he remained until September 1915.

Ordered to USS North Carolina, he had instruction in aeronautics and on May 17, 1916 was designated Naval Aviator. He had further flight training and duty at the Naval Air Station, Pensacola, Florida, until May 1917, then sailed in USS Jupiter as a Member of the first Aeronautical Detachment to France. He was Officer in Charge of the Naval Aviation Unit at Tours, France and as such was in charge of the training of about two hundred US student aviators. While there, he received the French Army Aviator Brevet and at St. Raphael qualified as a French Naval Aviator. In November 1917 he assumed command of the Naval Aviation School, Montchic Lacanau (Gironde), France and in January 1918 transferred to command of the US Naval Air Station, Brest, France.

In May 1918 he reported as Chief of Staff to Commander Destroyer Flotillas at Queenstown, Ireland and in September of that year became Commanding Officer of USS Conyngham. He received a Letter of Commendation from Secretary of the Navy Josephus Daniels stating: “He rendered meritorious service in command of the Conyngham from September 1918 until the end of the submarine campaign.”

Returning to the United States, he reported in May 1919 for duty in connection with fitting out USS Clemson, building at the Newport News (Virginia) Shipbuilding and Dry Dock Company. He commanded that destroyer from her commissioning, December 29, 1919 until May 1920, when he transferred to command of the newly commissioned USS Sicard. Detached from command of that destroyer in December 1920, he next served as Naval Inspector of Aviation Engineering Material (later redesignated Naval Inspector of Engineers), Buffalo, New York. In September 1921 he became Executive Officer of the Naval Air Station, Hampton Roads, Virginia.

In February 1922 he joined the Staff of Commander Aircraft Squadrons, Battle Fleet, USS Aroostook flagship and later became Commanding Officer of Observation Plane Squadron TWO, based on that aircraft tender.

On take off from an unfavorable part of the municipal flying field at Glendale, California, on October 16, 1924, his right wing struck a hanger, continued flight over the hanger, then nosed into the ground. The fuselage broke near the pilot’s cockpit and he was unable to escape the burning plane. Death was due to extreme burns rather than crash injury.

In addition to his Letter of Commendation, Commander Dichman had the Victory Medal, Destroyer Clasp (World War I).