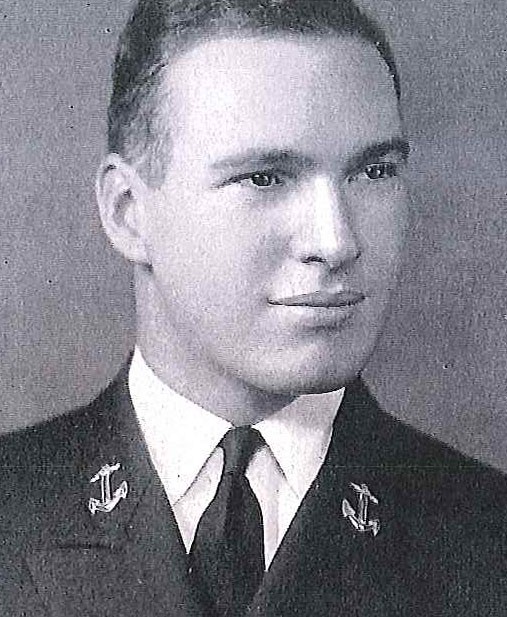 Harry Frederick Fischer, Jr., was born in Honesdale, Pennsylvania, on November 14, 1916, son of Harry F. and Helene Bishop Fischer. He attended Technical High School in Scranton, Pennsylvania, and enlisted in the US Navy as an Apprentice Seaman on May 15, 1935. He served on board the USS Vega and USS Ranger and took examination for the US Naval Academy while in the latter vessel. Receiving a special order discharge, he entered the Naval Academy on July 7, 1936. As a Midshipman he was a member of the Wrestling Team. He was graduated and commissioned Ensign on June 6, 1940, and subsequently advanced in rank to that Captain, to date from July 1, 1959.

After graduation from the Naval Academy in June 1940, he was assigned to USS San Francisco (CA-38), and was serving as Signal Officer to the on board that vessel at Pearl Harbor, T.H., when the Japanese attacked the Fleet there on December 7, 1941. Before his detachment in September 1942, he participated in air action off Bougainville, the Salamaua-Lae raid and the Guadalcancal-Tulagi landings. He then returned to the United States for submarine instruction at the US Naval Submarine School, New London, Connecticut.

Detached from the Submarine School in December 1942, he joined USS Thresher (SS-200) in January 1943, and served as Engineer and Diving Officer of that submarine in operations in the Pacific Area. “For conspicuous gallantry and intrepidity as Diving Officer in USS Thresher during the Eleventh War Patrol of that vessel in enemy Japanese controlled waters, from December 30, 1943, to February 18, 1944…” he was awarded the Silver Star Medal. The citation further states:

“Expertly controlling depth, Lieutenant Fischer rendered invaluable assistance to his commanding officer in delivering torpedo attacks to sink five enemy ships totaling over 26,000 tons and damage another of over 9,000 tons, and in conducting effective evasive tactics during enemy counterattacks. His skill and devotion to duty were in keeping with the highest traditions of the US Naval Service.

Of the eight Submarine War Patrols in which he participated, some were in the USS Spikefish during the latter period of the war. He was awarded the Bronze Star Medal with Combat “V,” for “heroic service as Assistant Approach Officer of USS Spikefish during the Fourth War Patrol of that vessel in the enemy Japanese-controlled waters of the Nanpo Shoto, Yellow Sea and East China Sea Areas from July 8 to August 31, 1945…” the citation continues:

“Exercising an extensive knowledge of attack problem during their period, Lieutenant Commander Fischer rendered valuable assistance to his commanding officer in carrying out successful attacks which resulted in the sinking of two hostile ships, totaling 1,750 tons. In addition, he contributed materially to the success of his vessel in evading severe enemy countermeasures….”

He was also awarded a Letter of Commendation, with Ribbon and “V” as follows: “For meritorious conduct in action in the performance of his duties in the USS Thresher during the Ninth War Patrol of that vessel in the Makassar=Philippines Area from 19 June to 30 July 1943. As Officer of Desk, his skillful navigation of his ship and keenness in detecting enemy vessels assisted his commanding officer considerably in conducting successful attacks which resulted in the sinking of 20,000 tons of enemy shipping and in damaging 18,850 tons…”

Detached from USS Spikefish in September 1946, after serving from some time as her Executive Officer, he returned to the Submarine School to serve until April 1949 as Head of the Submarine Department. In May of that year he became Executive Officer of USS Carp (S338), and in January 1950 he was transferred to USS Ronquil (SS-398) as Commanding Officer. In that command he participated in Korean operations until May 1952. Reporting to the Navy Department, Washington, DC in June, he served as Head, Policy Coordination Section, in the Bureau of Naval Personnel.

Completing his tour of shore in June 1955, he reported to Commander Destroyers, Pacific Fleet, as a prospective commanding officer. In September he assumed command of USS Rogers (DDR-876), and two years later was detached for instruction at the Naval War College, Newport, Rhode Island. Graduated in June 1958, he reported for duty on the Staff of the Commander in Chief, Pacific Fleet, serving a year each as Undersea Warfare Officer and Fleet Readiness and Training Officer. He next commanded Submarine Division 71, and in September 1961 assumed command of USS Pollux (AKS-4).

He was assigned in September 1962 to the Joint Staff, Commander US Forces, Japan and in August 1964 was ordered detached for duty at the Naval War College, Newport, Rhode Island.