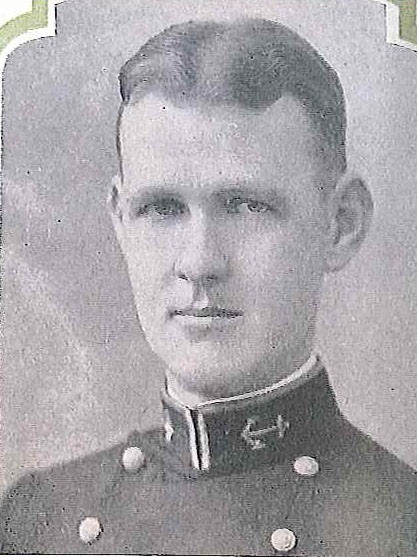 Warner Ryerson Edsall was born in Hamburg, New Jersey, on May 7, 1904, son of Robert L. and Katharine (Lawrence) Edsall. He attended South Philadelphia High School and the University of Pennsylvania one year prior to his appointment to the US Naval Academy, Annapolis, Maryland, in 1923. As a Midshipman he participated in Tennis and was a member of the Musical Club. Graduated and commissioned Ensign on June 2, 1927, he subsequently attained the rank of Captain, his date of rank, March 20, 1945.

After graduation from the Naval Academy, he spent three years in battleships of the Scouting Fleet, USS Arkansas and USS Wyoming, with duty in gunnery and communications. He attended the Submarine School, New London, Connecticut, in 1930 and thereafter until 1934 served in USS S-28, operating as a unit of Submarine Force, Pearl Harbor, Territory of Hawaii. He was a student of the Naval Postgraduate School in 1934-1936, and continued the course in Naval Engineering (Design), the next year at the University of California, at Berkeley, Receiving the degree of Master of Science in June 1937.

He again had submarine duty from 1937 to 1941, serving first as Division Engineer Officer of Submarine Division EIGHT (attached to USS S-28, and USS S-24), in USS Pampano, and as Commanding Officer of the USS S-34. In the summer of 1941 he reported to the Supervisor of Shipbuilding, Electric Boat Company, New London, Connecticut, and in February 1942 was detached for duty at Headquarters, Commander in Chief, U. S. Fleet, Washington, DC, where he served until September 1943 as Assistant Operations Officer.

For two months he was a student at the Fleet Sound School, Key West, Florida, and the Naval Training Station, Norfolk, Virginia, and reporting to the Federal Shipbuilding and Dry Dock Company, he had pre-commissioning duty with USS Melvin. He commanded the Melvin from her commissioning, November 24, 1943, to October 1944, and for outstanding service as Commanding Officer of that destroyer was awarded the Legion of Merit, the Bronze Star Medal, and a Gold Star in lieu of another Bronze Star Medal. The citations follow in part:

LEGION OF MERIT:    “For exceptionally meritorious conduct. . .as Commanding Officer of USS Melvin during action against enemy Japanese forces in the Pacific Ocean Area, on June 13, 1944. Acting promptly when his ship obtained radar contact on an enemy submarine and was ordered to proceed independently to investigate and destroy the hostile craft, (he) closed range to the contact during darkness(and) scored several probable hits before the submarine submerged. Despite the appearance of a wide diesel oil slick and a large white bubble at the diving point, he conducted a series of depth-charge attacks until sonar contact could no longer be obtained. . .”

BRONZE STAR MEDAL: “For meritorious achievement as Commanding Officer of a United States Destroyer, in action against enemy Japanese forces in Central Pacific Waters from June 13 to August 7, 1944. Contacting a large enemy merchant vessel, (he) daringly and relentlessly closed in to prevent the ship’s escape and, in spite of intense return fire, scored numerous hits until the enemy’s destruction was assured. . .”

GOLD STAR in lieu of Fifth Bronze Star Medal: “From heroic achievement as Commanding Officer of USS Melvin, in action against enemy Japanese forces in the Pacific War Area on June 16, 1944. When his ship obtained a night radar contact on a suspected enemy submarine, (he) immediately proceeded to close the hostile vessel and, after executing one attack which exhausted his supply of depth charges, assisted another destroyer in making a series of attacks. . . (contributing) materially to the probable destruction of the enemy craft as evidenced by a heavy underwater explosion one minute after the last depth charge pattern. . .floating debris, bubbling diesel oil and a large oil slick. . .”

For five minutes he commanded Destroyer Division 110, in the Pacific, and for meritorious service in that command was awarded Gold Stars in lieu of two additional Bronze Star Medals. The citations follow in part:

GOLD STAR in lieu of Second Bronze Star Medal: “For conspicuous achievement as Commander Destroyer Division ONE HUNDRED TEN in action against enemy forces in the Japanese Homeland on February 15 and 17, 1945. With his division operating as an integral until of a destroyer scouting and patrol line which was at the time within 35 miles of the Japanese mainland, (he) expertly directed the ships under his command in destroying enemy aircraft, identifying and homing our returning flights, rescuing personnel from damaged aircraft and providing early warnings of the approach of enemy forces. . .

GOLD STAR in lieu of Third Bronze Star Medal: “For meritorious achievement as Commander Destroyer Division 110, aboard USS Laws, during operations. . .in the vicinity of Luzon, Formosa, the Ryukyus, French Indo China, the Japanese Empire and the Bonins, and Volcanoes, from November 22, 1944 to March 5, 1945. . . (He) organized his ships to protect important heavy units of our Fleet from enemy submarine, aircraft and surface attacks. . . .”

Remaining in the Pacific, he served from March 1945 until November of that year as Chief of Staff to Commander Cruiser Division 13. He was awarded a Gold Star in lieu of the Fourth Bronze Star Medal formeritorious achievement as Operations Officer on the staff of Commander Task Force 54 during the period March 25 to May 5, 1945. The citation states:“For meritorious service as Operations Officer on the staff of Commander Task Force FIFTY FOUR during operations against enemy Japanese forces in the vicinity of Okinawa from March 25 to May 5, 1945. By his professional skill and tireless energy, Captain Edsall rendered invaluable assistance to the Task Force commander in organizing, directing and maneuvering his group in numerous combat missions while acting as gunfire and covering force during the assault and capture of Okinawa. , ,”

A student at the National War College, Washington, DC, from August 1950 until June 1951, he served for a year thereafter as a member of the Joint Staff, Joint Chiefs of Staff. In September 1952 he assumed command of USS Missouri, and was on the bridge of that battleship, on combat duty in the Far East, at the time of his death due to a heart attack, on March 26, 1953.