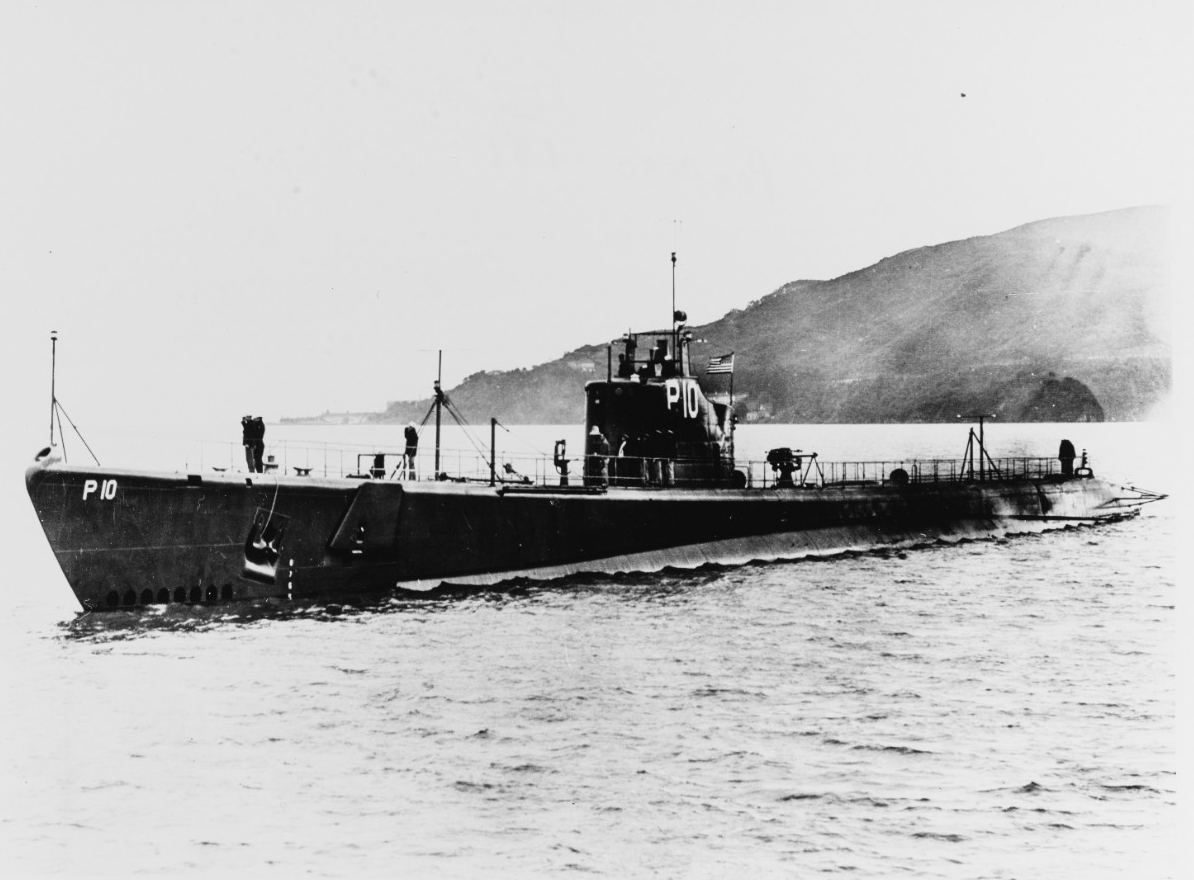 One of the best of food fishes, a marine carangoid living in the southern Atlantic and Gulf coasts of North America.

In the years preceeding World War II, Pompano operated out of Mare Island off the west coast of the United States, training her crew and patrolling in a constant state of readiness.

Although the submarine was awarded a battle star for the Pearl Harbor raid, she had not yet arrived from Mare Island. Reaching port shortly after the disastrous strike, she sailed from Pearl Harbor 18 December 1941 for her first war patrol, devoted mainly to reconnoitering the eastern Marshall Islands for a carrier raid in January. Planes from the flattops bombed the submarine by mistake 20 December, but she escaped damage. 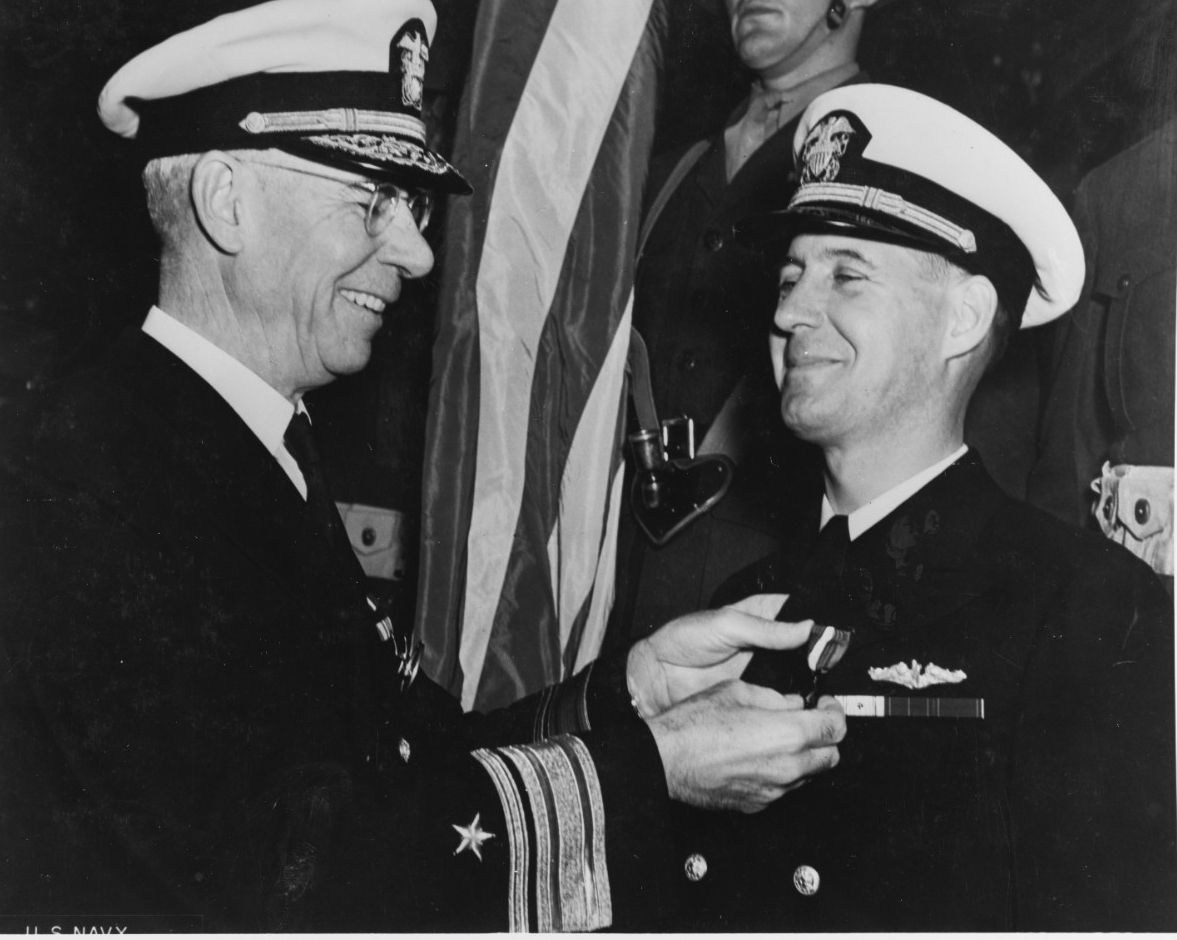 Pompano arrived off Wake Island 1 January 1942 to gather intelligence. On the 8th she inspected Bikar and subsequently viewed several other islands of the group.

She sighted several large ships protected by patrol craft in the harbor at Wotje. On 13 January one of the large vessels came out. Pompano fired four torpedoes scoring two hits, and the vessel broke up. Four days later, when one of the patrol boats steamed out of the harbor, Pompano worked her way between this enemy and the channel. Both torpedoes exploded then, with the enemy prematurely, foiling her first attack. The charging directly for her, the submarine waited until her target was 1000 yards away before firing two -fish.- Although these torpedoes evidently missed, they threw the enemy off balance so that his depth charging was ineffective.

After thoroughly reconnoitering Maloelap, Pompano departed -24 January, arriving Pearl Harbor on the 31st. On the same day, aided by her reports, the fast carriers of the Pacific Fleet raided the Marshalls.

On her next patrol, undertaken in Japanese home waters, Pompano was able to attack five vessels successfully, sinking a total of 16,500 tons. Pompano left Pearl Harbor 20 April 1942, refueled at Midway, and entered her area 7 May, patrolling the steamer lanes west of Okinawa and in the East China Sea. Shipping was scarce, but on 24 May she caught a large sampan and sent it down with gunfire. On the next day she torpedoed tanker Tokyo Marto, which exploded and sank.

As Pompano shifted her patrol to the main route between Japan and the Indies, a large transport escorted by one destroyer caught her eye 30 May. Running to a position ahead of the convoy, the marauder waited until her victim was only 750 yards away before scoring two solid hits which sank the transport, 7,983 ton Atsuta Marto, two and a half hours later.

With her fuel getting low and a strong possibility of not being able to refuel at Midway on the way back because of the Japanese attempt to invade the island, Pompano began to work eastward. On the morning of 3 June she found a small inter-island steamer, setting the vessel afire with gunfire.

On 5 June, while on the shipping route between Japan and the Marianas, the submarine caught a trawler and sank it with gunfire. Two days later word arrived that the Japanese fleet, decisively defeated in the Battle of Midway, was fleeing toward Japan. Pompano took up a position to intercept them, but made no contact. On 13 June 1942 she put into Midway for refueling, and on the 18th arrived in Pearl Harbor.

The submarine sailed from Pearl Harbor again 19 July, bound for Japan and her third war patrol. By 3 August she was in her area, and began patrolling within four miles of the coast. A few minutes past midnight on the morning of 7 August, she fired four torpedoes at a large freighter, but all missed.

Two days later a cruiser or a large destroyer sighted Pompano, and opened fire. As Pompano ducked under the sea, shells could be heard hitting the water. Soon a heavy barrage of depth charges exploded close aboard. Rising water in the engine room necessitated starting the pumps, which brought another heavy barrage of depth charges. After running aground twice while attempting to escape, and with her battery almost exhausted, she surfaced only 1,000 yards from shore, and cleared the area.

Undaunted, the ship dove for her second attack at noon 12 August 1942. A freighter was coming into position when Pompano sighted an enemy destroyer coming down between the sub and her target. Firing two torpedoes, Pompano-s men heard two very loud explosions, and saw a huge column of spray and water through the periscope, blotting out the destroyer-s bow at 700 yards distance. Both sets of screws stopped immediately. As Pompano closed the freighter, it settled below, evidently a victim of the second torpedo.

Another attack on 21 August failed when a convoy escort kept Pompano down while three freighters passed. On the morning of the 23rd she launched another torpedo attack on a large passenger freighter, only to have all three torpedoes miss. The target replied with his deck gun. Surfacing after nightfall, the sub sighted a destroyer 7,000 yards away but could not attack when the destroyer sighted her in turn, and launched depth charges close aboard.

The last attack of the patrol came while enroute Midway, when, on the 500 mile circle from Tokyo, Pompano sighted a patrol ship, Naval Auxiliary 163, lying to. Since the vessel was of shallow draft, and since there were no other enemy forces visible, the submarine surfaced and engaged with deck guns, sinking the enemy an hour later. Pompano sighted an unidentified periscope the next morning, but it disappeared before she could attack. The ship arrived Midway 8 September and Pearl Harbor four days later.

A Navy Yard overhaul at Mare Island, including the installation of new main engines, kept the ship in the yard until 18 December 1942. Sailing back to Pearl Harbor, she departed on her fourth war patrol 16 January 1943. The Marshalls were her first objective, and at dawn on the 25th she was off Kwajalein. After reconnoitering the area, she moved on to Truk to begin patrolling.

Catching a tanker with only one escort on 30 January, she damaged the tanker with torpedoes. Another tanker came in view 4 February, but only one of the stern torpedoes hit. Although damaged, the tanker managed to make it into port. Moving back to the Marshalls, Pompano sighted another tanker on the morning of 18 February. Two hits slowed the Japanese down, but depth charging held Pompano down until her target had escaped. After reconnoitering Rongerik, Rongelap, and Bikini, she returned home mooring at Midway 28 February.

The submarine left Midway again 19 March, bound for Tokyo. During the entire patrol, with 26 days on station, she sighted only four torpedo targets, and launched only two attacks, both under adverse conditions. Two-thirds of the time the ship had to fight extremely rough and stormy weather. She returned to Midway 5 May and to Pearl Harbor five days later.

On 6 June the submarine was underway again from Pearl Harbor for the Nagoya, Japan area. Stopping briefly at Midway, she entered her area 19 June, patrolling across traffic lanes from Japan to the south. She celebrated the Fourth of July by putting two more torpedoes into a grounded ship, damaged by an earlier attack by Harder. Four further torpedo attacks during the patrol were unsuccessful. A goodsized sampan was sunk with gunfire 17 July. Pompano ended the unsuccessful patrol at Midway 28 July.

Pompano left Midway 20 August, bound for the coasts of Hokkaido and Honshu. She was never heard from again, and when she failed to return, was presumed lost. The Japanese knew that she was in her area, however, for two ships fell to her torpedoes during September: Akama Maru, a 5,600 ton cargo carrier, on the 3rd, and Taiko Maru, a 2,958 ton cargo carrier on the 25th. The enemy made no anti-submarine attacks during this period in Pompano-s area, so enemy mines probably destroyed the veteran. Pompano was struck from the Navy List 12 January 1944. 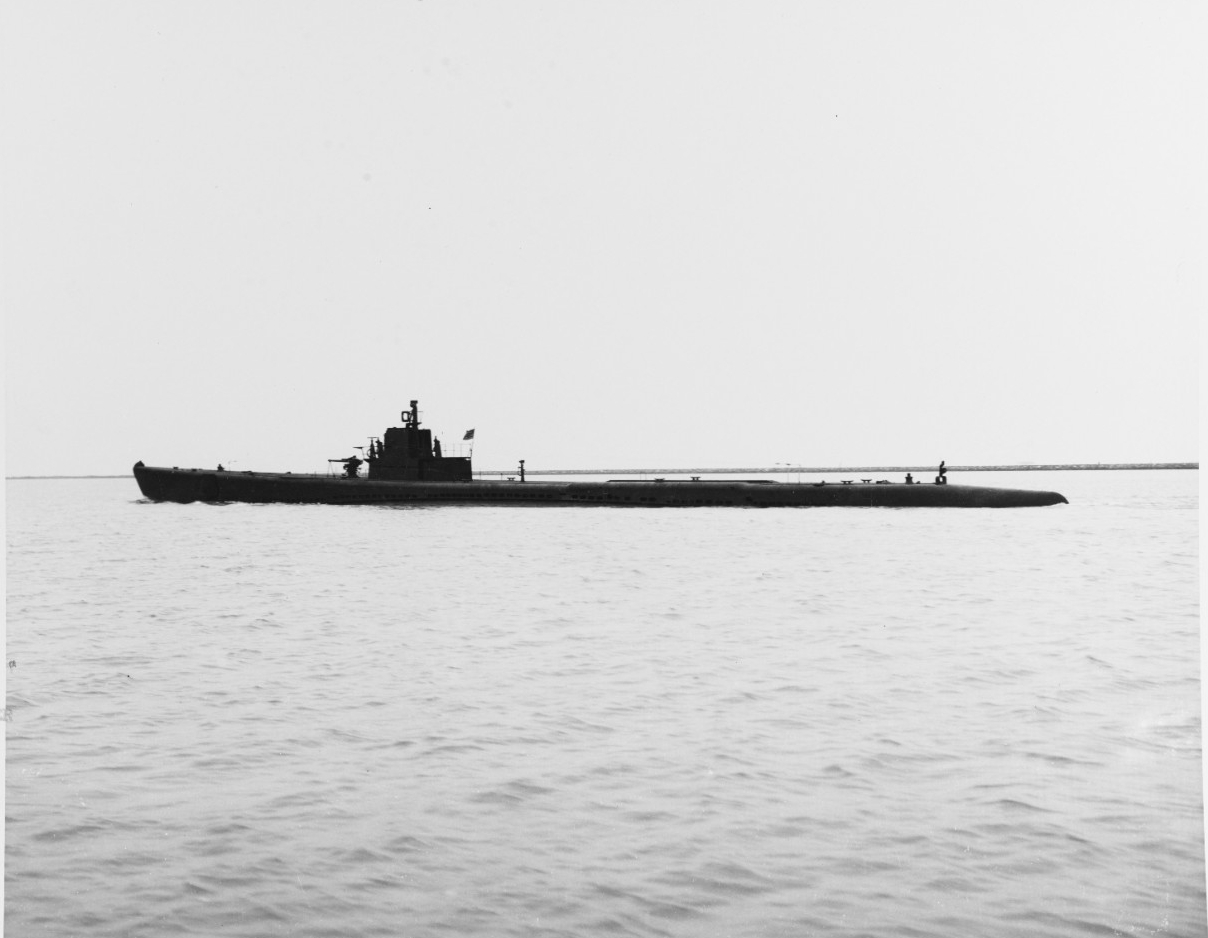