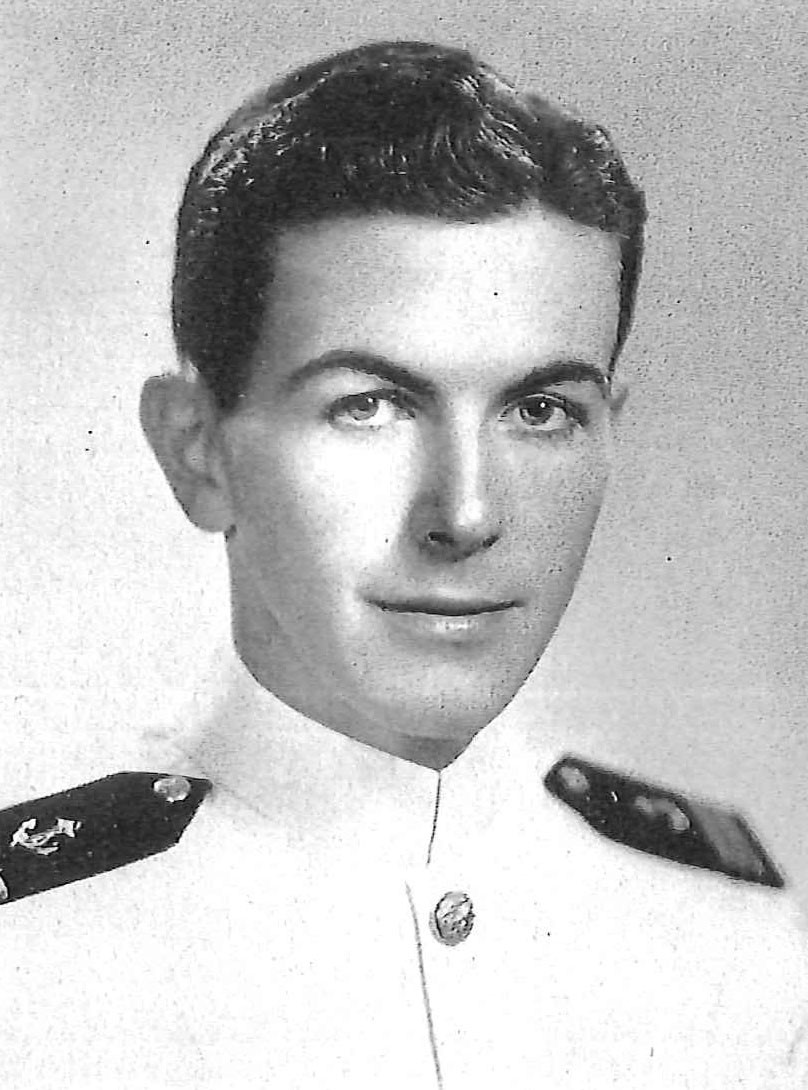 Thomas Jackson Christman was born on March 6, 1922, in Seattle, Washington, son of Milton Valentine and Ella (Grundler) Christman, both now deceased. He attended Orlando (Florida) Senior High School and the University of Florida at Gainesville, for one year, prior to entering the US Naval Academy, Annapolis, Maryland, on appointment from Florida in 1940. He was graduated with “distinction,” Second in the Class of 1944 on June 9, 1943 (accelerated course due to World War II) and was commissioning Ensign. He was awarded four prizes at graduation for standing first in Navigation, Ordnance, Marine Engineering and Electrical Engineering. Advancing progressively in rank, he subsequently attained that of Rear Admiral, to date from July 1, 1969.

Following graduation from that Naval Academy in 1943, he had duty as an Observer at several air stations in Florida, prior to reporting in September of that year on board the USS Coghlan (DD-606). Serving as Engineering Officer, Executive Officer and Navigator in that destroyer, he saw action during operations in the Marshalls, Gilberts, Marianas, at Leyte and Lingayen Gulf and during the Occupation of Japan. In March 1946 he became Executive Officer of the USS Rhind (DD-404), which was a target for the A-Bomb Tests as Bikini Atoll in 1946. Detached from that destroyer in September 1946, he next had instruction at the Fleet Sonar School, Key West, Florida and from November 1946 to May 1947 was Executive Officer and Commanding Officer of the USS Earle (DMS-42).

He reported in July 1947 for an ordnance postgraduate course in physics electronics at the Naval Postgraduate School, Annapolis, Maryland, and from September 1948 to June 1950 continued instruction at the Massachusetts Institute of Technology at Cambridge, from which he received the degree of Electrical Engineer. He next had duty as Assistant and Acting Bureau of Ordnance Technical Liaison Officer, Southern California Area and in July 1952 became Sidewinder Guided Missile Program Coordinator at the US Naval Ordnance Test Station, China Lake, California. He was commended by the Secretary of the Navy “for exceptionally meritorious conduct… from July 1, 1951 to October 16, 1954… (during which time) he contributed materially to the successful development of Sidewinder by personally organizing the Sidewinder development group into an efficient operating team, by achieving a smooth integration of technical and administrative effective coordination and liaison for the entire development program….”

Assigned in November 1954 to the Bureau of Ordnance, Navy Department, Washington, DC, he was Assistant Section Head in the Guided Missile Branch of the Research Division, Sidewinder Guided Missile Project Officer and Head of the Aircraft Weapons Components Branch until May 1958. He again entered the Massachusetts Institute of Technology and as a Sloan Fellow had graduate work in Industrial Management, receiving a Masters Degree in Industrial Management. During the period July 1959 to April 1962, he was Assistant Bureau of Naval Weapons Resident Representative and Bureau of Naval Weapons Resident Representative (Special Projects Office), Sacramento, California. In that capacity, he was engaged in the technical administration of the Solid Rocket Plant at the Aerojet-General Corporation.

He next had duty as Assistant Head and Head of the Missile Branch and Deputy Director of the Technical Division, Special Projects Office, Washington, DC. In that assignment, he had the technical administration of six hundred and fifty million dollars of Polaris Missile contracts. In June 1967 he assumed command of the Naval Ammunition Depot, Crane, Indiana, which is the largest Naval Ammunition Depot, employing 6000 civilian personnel. In August 1968 he became Deputy Commander for Plans and Resources, Naval Ordnance Systems Command, Washington, DC, and in January 1970 was designated Deputy Commander for Logistics Support, Naval Ordnance Systems Command.