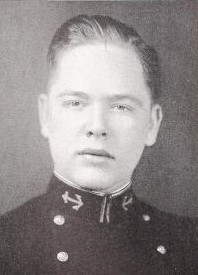 Francis O’Conner Fletcher, Jr., was born in Asheville, North Carolina, on June 2, 1911, son of Francis O’Conner and Lucy Gordon (Twitty) Fletcher. He attended David Millard High School in Asheville and the Georgia School of Technology at Atlanta, for one and one half years, prior to his appointment to the US Naval Academy, Annapolis, Maryland, from his native state in 1930. As a Midshipman he participated in outdoor rifle shooting and qualified as a Rifle Coach. Graduated and commissioned Ensign on May 31, 1934, he subsequently advanced in rank, attaining that of Captain, to date from July 1, 1953.

After graduations from the Naval Academy in 1934, he joined the USS Chester. He was attached to that cruiser during the trip to the Orient with Secretary of War George H. Dern aboard, who represented the President of the United States as the Inauguration of Manuel Quezon as President of the Philippine Commonwealth. In May 1936 he was assigned to the USS Charleston, and in January 1938 reported as First Lieutenant and Gunnery Officer aboard the USS Babbitt. Detached from that destroyer in April 1939, he continued duty afloat in the USS New York, and remained aboard that battleship, following the United States entry into World War II, December 8, 1941, until August 1942.

He received a commendatory letter and the Army Commendation Medal for outstanding duty while serving as Secretary of the Joint Military Transportation Committee and United States Secretary of a Combined Military Transportation Committee while attached to Headquarters Commander in Chief, United States Fleet, from September 1942 to March 1943. In May of that year he reported as Executive Officer of the USS McCord, participating in the occupation of Kwajalein, Majuro and Eniwetok Atolls, and operations in the South Pacific. In April 1944 he assumed command of the USS Frazer, and under his command that destroyer saw action during the Hollandia operation (Aitape, Humboldt Bay and Tanahmerah Bay); the raid on Truk Satawan and Ponape; and operations at Lingayen Gulf. He transferred to command of the USS David W. Taylor in February 1945, commanding that destroyer through the assault and occupation of Okinawa Gunto and the Third Fleet operations against Japan. Detached from the David W. Taylor in January 1946, following the cessation of hostilities in August 1945, he was next I command of the USS Theodore E. Chandler.

For two years, September 1947- September 1949, he was Director of Naval Officer Procurement, Boston, Massachusetts, after which he was Plans Officer and Special Assistant to the Commander Military Sea Transportation Service, Atlantic Area, with headquarters in Brooklyn, New York. In January 1951 he reported as Commanding Officer of the USS Rich and when detached from that command in December of that year, was assigned as Commander Escort Destroyer Division Twenty Two. He has duty, December 1952 to March 1953, in the Office of the Chief of Naval Operations, Navy Department, Washington, DC, and in June become Administrative Officer at the Charleston, South Carolina, Naval Shipyard. Under orders of January 5, 1955 he now serves as US Naval Attaché and US Naval Attaché for Air, Mexico City, Mexico.