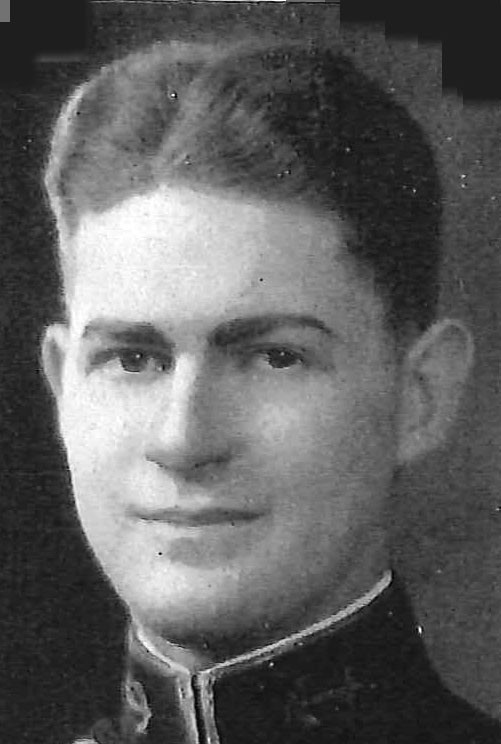 Paul Walker Clarke was born on May 6, 1908, in Louisa, Virginia, son of Mrs. Celeste (Wilkinson) Clarke and the late Reverend Randolph T. Clarke. He attended Ferrum (Virginia) Training School and the Virginia Polytechnic Institute at Blacksburg (1924-1927), before his appointment to the US Naval Academy, Annapolis, Maryland, from his native state in 1927. Graduated and commissioned Ensign on June 4, 1931. Transferred to the Supply Corps of the US Navy in September 1937, he subsequently attained the rank of Captain to date from July 1, 1950.

Following graduation from the Naval Academy in 1931, he had consecutive sea service in the battleship Nevada and Arkansas and the destroyer Noa. Detached from the latter in August 1934 he attended the Naval Finance and Supply, Philadelphia, Pennsylvania, until June 1935. Completing his instruction he joined the USS Maryland, as Assistant Supply Officer, and in November of the same year transferred to the USS Altair as Disbursing Officer.

Between July 1937 and April 1939 he was assigned to the Naval Torpedo Station, Newport, Rhode Island, as Assistant Support Officer, followed by sea service until January 1941 as Supply Officer of the cruiser Milwaukee. Returning to the United States for duty, he served in the Subsistence Division of the Bureau of Supplies and Accounts, Navy Department, Washington, DC, and during September and October 1942, he was attached to the Office of the Chief of Naval Operations, Navy Department, where he assisted in the planning for Allied landings in North and North Western Africa (November 8, 1942). The same month he became Supply Officer of the Naval Operating Base, Casablanca, French Morocco, with additional duty on the staff of Commander Moroccan Sea Frontier, and in October 1943, reported in a similar capacity at the Advanced Amphibious Training Base, Bizerte, Tunisia, with additional duty from September 1944 on the staff of Commander Amphibious Group Two.

“For exceptionally meritorious conduct… (at) Bizerte, Tunisia, prior to and during the Allie invasion of Southern France, in August 1944…” he was awarded a Legion of Merit, with Combat Distinguishing Device “V,” The citation continues in part: “… Commander Clarke capably administered supply activities for the ships and craft of the Eighth Fleet during the intensive preparation for seaborne movement of the invasion forces to the assault area… By his brilliant leadership and conscientious devotion to this vital task, he aided the ships of the entire Fleet to operate almost continuously at sea throughout protracted periods, thereby contributing materially to the over-all success of the invasion.

In January 1945 he reported as Executive Officer at the Naval Supply Depot, Seattle, Washington, and served in that assignment until July 1946 when he joined the staff of Commander Pacific Reserve Fleet, as Supply Officer, Transferred in July 1947 as Assistant to the Supply Officer on the Staff of Commander Service Force, Pacific, with headquarters at Pearl Harbor, Territory of Hawaii, he served while in that assignment as Supply Officer on the staff of Commander Naval Task Group Seven Point Three (Operation Sandstone—Eniwetok Atom Bomb tests). He was assigned in August 1948 as Assistant Supply Officer at the Naval Supply Depot, Mechanicsburg, Pennsylvania, and remained in the capacity until September 1950, when he reported for instruction at the Industrial College of the Armed Forces, Washington, DC. He is now under orders to report to the Office of Naval Material, Department of the Navy.