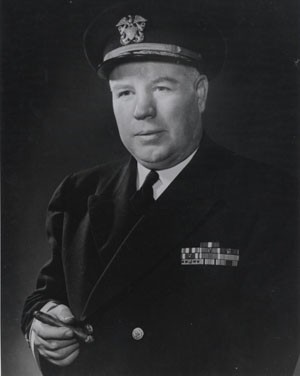 Edmund Battelle Taylor was born in Chicago, Illinois, on 4 April 1904, but spent his childhood in Ohio, from which state he was appointed to the Naval Academy in 1921. As a Midshipman he excelled in athletics, being a member of the Varsity Football Team (and its Captain in 1924), the Varsity Lacrosse Team (All-American, 1924-25), and the Basketball and Boxing Squads. Graduated on 4 June 1925, he subsequently had sea duty in the Battleships New York, Texas and Wyoming and the destroyers Hatfield, Leary and Perry, interspersed with assignments to the Naval Academy as Assistant Football Coach, Assistant Lacrosse Coach, and Instructor in Ordnance and Gunnery.

Duty as Aide and Flag Lieutenant on the Staff of Commander Destroyers, Battle Force, and in the Officer Personnel Division of the Bureau of Navigation, Navy Department, preceded his World War II service in command of the Destroyer Duncan. That vessel, under his command, rescued survivors of the USS Wasp and was later lost from severe damage received while launching a successful torpedo attack against the Japanese cruiser Furutaka. For extraordinary heroism in that command, he was awarded the Navy Cross, and received a Letter of Commendation from the Commander in Chief, Pacific Fleet.

He was Commanding Officer of the USS Bennett when that destroyer, while on her shakedown cruise to the Caribbean early in 1943, rescued survivors of a torpedoed merchant ship. After his detachment in July 1943, he had successive command of Destroyer Division 90 and Destroyer Squadron 45 in the South and Central Pacific areas. The Legion of Merit and Bronze Star Medal were awarded him for outstanding services in command of Destroyer Division 90 at Empress Augusta Bay and in the Bismarck Archipelago area; and the Silver Star Medal for conspicuous gallantry as Commander Destroyer Squadron 45 in the First Battle of the Philippine Sea.

During the last eight months of the war he served as Aide to Secretary of the Navy James Forrestal, and in May 1946 returned to the Naval Academy as Head of the Department of Physical Training and Director of Athletics. In July 1948 he went to sea as Assistant Chief of Staff for Operations to the Commander in Chief, Pacific Fleet, and remained afloat from January 1950 to January 1951 as Commanding Officer of the USS Salem. He again served in the Navy Department, first in the Bureau of Naval Personnel, later as Assistant to the Under Secretary of the Navy, and when promoted to Flag Rank in 1952, he returned to sea in command of a Destroyer Flotilla of the Atlantic Fleet.

He had eighteen months' service as Commander US Naval Base, Guantanamo Bay, Cuba, prior to his assignment in August 1955 as the Navy's Chief of Information. On 18 January 1958 he assumed command of a Destroyer Force, US Atlantic Fleet and on 31 January 1960 became Commander Antisubmarine Defense Force, Atlantic Fleet (later redesignated Antisubmarine Warfare Force, Atlantic) in the rank of Vice Admiral. [Cuban Missile Crisis] "For exceptionally meritorious conduct..." in that capacity from February 1960 to November 1963 he was awarded a Gold Star in lieu of the Second Legion of Merit. On 11 December 1963 he received his permanent rank of Rear Admiral upon reporting as Commandant of the Fifth Naval District, and Commander US Naval Base, Norfolk, Virginia, and for "exceptionally meritorious service..." in that assignment was awarded the Distinguished Service Medal.

On 1 May 1966 he was transferred to the Retired List of the US Navy and was advanced to Vice Admiral (the highest rank he held while active duty). Vice Admiral Taylor died 30 April 1973.

Navy Cross: "For extraordinary heroism...during action against enemy Japanese naval forces off Savo Island on October 11, 1942. Although his ship had sustained heavy damage under hostile bombardment, Lieutenant Commander Taylor, by skillful maneuvering, successfully launched torpedoes which contributed to the destruction of a Japanese cruiser. Maintaining the guns of the Duncan in effective fire throughout the battle, he, when the vessel was finally put out of action, persistently employed to the fullest extent all possible measures to extinguish raging fires and control severe damage..."

Distinguished Service Medal: "For exceptionally meritorious service...as Commandant Fifth Naval District and Commander U.S. Naval Base, Norfolk, Virginia, during the period November 12, 1963 to April 30, 1966, command relationship with our Canadian Allies to the end that our total ASW forces may now complement each other and function as one force..."

Bronze Star Medal: "For meritorious service in action against the enemy...operating in the Bismarck Archipelago area on the night of February 24-25 1944. Commander Taylor led his ships deep into enemy held waters in a harassing night raid and bombardment of Japanese installations in the vicinity of Rabaul. Despite known enemy shore batteries and possible mine fields, he directed the attack at close range, which resulted in severe damage to supply areas and ammunition dumps. Due to his excellent seamanship and skillful execution of the attack, no damage was inflicted on any of his ships..."

Letter of Commendation: "For meritorious action and distinguished service...during the operations subsequent to the loss of the USS Wasp. His fine judgment in seamanship made possible the successful rescue of many officers and men in an area where enemy submarines were actively present..."