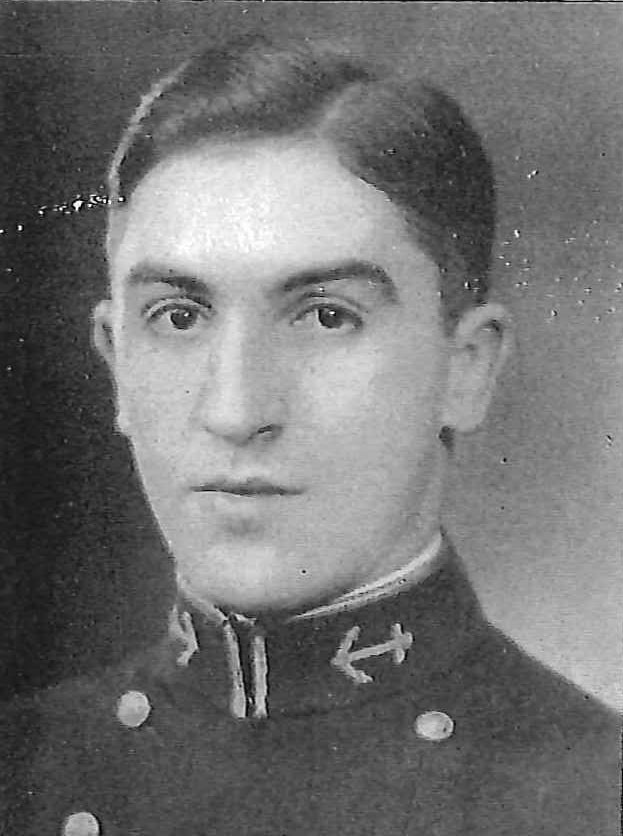 Thomas Aloysius Christopher was born in Perth Amboy, New Jersey on May 24, 1911, son of Thomas A. and Estelle L. (Rankin) Christopher, both now deceased. He attended high school in Perth Amboy and the Cochran-Bryan Preparatory School, Annapolis, Maryland, before entering the US Naval Academy on appointment from the Third Congressional District of New Jersey in 1929. He graduated and was commissioned Ensign on June 1, 1933. His date of rank as Rear Admiral is July 1, 1961.

Following graduation from the Naval Academy in 1933, he had two years duty in the cruiser Memphis and in June 1935 reported for flight training at the Naval Air Station, Pensacola, Florida and was designated Naval Aviator on June 12, 1936. While he was assigned to Scouting Squadron Eleven-S, his unit was embarked on USS Indianapolis and participated in the Presidential good-will tour to South America in the Fall 1936. In June 1938, he transferred to USS Langley for dutywith Patrol Squadron ELEVEN based at San Diego and participated in operations in Alaska, Panama Canal, Puerto Rico and Norfolk.  In July 1939 he was assigned to Patrol Squadron Four (redesignated Patrol Squadron Twenty-Two); Based on Pearl Harbor, Territory of Hawaii.

Between April and September 1942 he was Executive Officer of Headquarters Squadron Ten, based on Perth, Australia, after which he commanded the seaplane tender Childs. In October 1943 he reported as Operations Officer on the Staff of Deputy Commander Fleet Air Wing Ten and two months later became Commanding Officer of Patrol Squadron Thirty-Four. Under his command that squadron participated in “Black Cat” operations and in search and rescue missions for the Fifth Air Force in the New Guinea and Bismarck Sea areas. He was awarded the Navy Cross and a Gold Star in lieu of a Second Navy Cross and cited as follows:

Navy Cross: “For extraordinary heroism as Commander of the PBY-5 aircraft during action against enemy Japanese forces in the Bismarck Sea on the nights of December 31, 1943 and January 22, 1944. Operating in the vicinity of strongly defended Japanese bases, Commander Christopher pressed home close range attacks, flying in at extremely low level and striking fiercely. Despite adverse weather conditions, enemy aircraft and heavy, accurate anti-aircraft fire which damaged his plane on both occasions, he succeeded in inflicting serious damage on two Japanese warships…”

Gold Star in lieu of the Second Navy Cross: “For extraordinary heroism as Commander of a Flight of five PBY-5 planes during action against enemy Japanese forces in the Bismarck Sea Area, January 15, 1944. Locating a large, strongly escorted enemy convoy, Commander Christopher pressed home a masthead attack at extremely close range, inflicting extensive damage on the enemy vessels. Braving intense heavy and light anti-aircraft fire, as well as enemy aerial opposition in the vicinity, he brought his flight in low over the convoy and personally destroyed one 6,800 ton merchantman while the remainder of his flight destroyed two more. By his bold tactics and daring leadership, he contributed immeasurably to the success of the mission and the ultimate destruction of vital Japanese shipping in the area…”

He was awarded the Air Medal and Gold Stars in lieu of the Second and Third Air Medals for completing missions in the Pacific war area and is entitled to the Ribbon for, and a facsimile of the Presidential Unit Citation Patrol Squadron Thirty-Four.

He was assigned to the Office of the Deputy Chief of Naval Operations (Air), Navy Department, where he served in the Aviation Flight Division from June 1944 until September 1945 when he was ordered to fitting out duty in the escort carrier Palau and became Executive Officer upon her commissioning. Detached from that escort carrier in October 1947, he next reported as Operations Officer at the Naval Air Station, San Diego, California, where he remained until July 1950. He then reported to Commander Fleet Air Wings, Pacific, at Whidbey Island and was assigned as Officer-in-Charge, Fleet Air Detachment, Seattle, Washington. In February 1951 he joined USS Princeton in the Far East as Executive Officer.

He received a Letter of Commendation with authorization to wear the Commendation Ribbon and Combat V from the Commander Seventh Fleet “for meritorious achievement as the Executive Officer of USS Princeton during the sustained operational activities of that vessel as flagship of Commander Carrier Division Five and Commander Task Force Seventy-Seven against the enemy North Korean and Chinese Communist Forces from June 1 to August 15, 1951.” He is also entitled to the Ribbon for, and a facsimile of the Navy Unit Commendation awarded the USS Princeton.

He was Head of the Distribution Detail Section, Aviation Personnel Division in the Office of the Chief of Naval Operations from January 1952 until July 1954, after which he was a student at the Naval War College, Newport, Rhode Island. Completing the course there in June 1955, he then joined the Staff of the Supreme Allied Commander, Atlantic and in November 1957 assumed command of the attack aircraft Essex. During his command of Essex, planes from his ship spearheaded the US Peace Landings in Beirut, Lebanon, beginning July 15, 1958. In late August the ship was suddenly ordered to the Far East and after transiting the Suez Canal. Relived there, Essex came home by the way of Capetown, South Africa and arrived in Mayport, Florida, November 17. Under his command the warship steamed nearly 75,000 miles, or three times around the world at the Equator. He was relieved at Mayport on November 18, 1958. From the Essex he returned to the Navy Department for a tour of duty in the Bureau of Naval Personnel as Director, Recruiting Division.

Detached from the Bureau of Naval Personnel on October 6, 1961, he assumed the duties of Commander Carrier Division Seventeen on November 6, 1961 in the rank of Rear Admiral. On December 5, 1962 he reported as Commander Naval Forces, Marianas, with additional duty as Cincpac Representative, Marianas-Bonin. In December 1964 he became Commander Key West Force, with additional duty as Commander Naval Base, Key West Florida; Commander Fleet Air, Key West; and Commander Naval Air Bases, Key West. He was relived of the latter duty upon the disestablishment of that command of January 1, 1965. He was Navy Deputy to the Department of Defense Manager for Manned Space Flight Support Operations, headquartered in Norfolk, Virginia from May 1967 until relieved of active duty pending his retirement, effective August 1, 1968. He was awarded the Legion of Merit and cited as follows:

“For exceptionally meritorious service from May 1967 through July 1968 as Commander Manned Spacecraft Force, U.S. Atlantic Fleet… Rear Admiral Christopher has improved the efficiency of the Force, enhanced the economy of its operations, and provided outstanding support of Manned Spacecraft Flight Operations. He developed and successfully implemented more-effective training procedures, improved recovery operations. By his exemplary direction of the successful Apollo recovery operations, Rear Admiral Christopher contributed significantly to the mutual understanding and cooperation among the National Aeronautics and Space Administration, the Department of Defense, and the United States Navy. His evaluation of the Navy’s capabilities in support of future recovery operations will be of lasting benefit…”